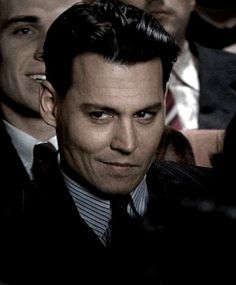 John Herbert Dillinger, Jr. is the main protagonist of Public Enemies. He is a gangster and criminal.

He was played by Johnny Depp, who also played John Shooter in Secret Window, Sweeney Todd in Sweeney Todd: The Demon Barber of Fleet Street, John Dillinger in Public Enemies, a version of Tony Shepard in The Imaginarium of Doctor Parnassus, The Wolf in Into the Woods, Gellert Grindelwald in the first two Fantastic Beasts films and Lanfranco Cassetti in Murder on the Orient Express.

The movie begins in 1933 as John Dillinger is brought to Indiana State Prison by his partner John "Red" Hamilton, under the disguise of a prisoner drop, with Dillinger himself as the prisoner. Several of his gang members, those being Charles Makley, Harry Pierpont, Ed Shouse, Homer Van Meter and Walter Dietrich, have acquired guns smuggled into the prison inside boxes of thread sent to the prison's shirt factory. And at the same time, Dillinger and Hamilton held a prison warden at gunpoint, forcing him to open the prison door. During the prison break, as Dillinger forces the guards to take off their uniforms, everything goes as planned until Shouse suddenly beats one of the guards to death. This also results in another guard getting shot. A shootout ensues between Dillinger and his gang as he ran away to their getaway car. Unfortunately, Dietrich was shot and mortally wounded by a sniper on the wall just as he was about to get into Dillinger's car. In retaliation, Dillinger kicks Shouse out of the car.