Taking pictures and selfies with his phone.

Help Bruce get out of Arkham Asylum so he can have Bruce owe him a “favour” (succeeded/failed).
Help Bruce get into the Pact (succeeded).
Get Harley's approval and win her love (succeeded/formerly).
Bring justice to criminals whether it’s lethal or not and work with Batman (ongoing,vigilante).
Torture Bruce and be his "Best Enemy" (succeeded,villain).
Cause chaos with Harley (formerly,villain).
Escape from Arkham and fulfil his revenge upon Bruce (ongoing,villain).
Fight Batman and be his greatest enemy (succeeded,villain).
Maintain his friendship with Bruce and hang out with him when he visits him in Arkham (ongoing,vigilante).

"John Doe" (later known by the name "Joker") is a major character in the Telltale Batman games and the villainous/anti-heroic main antagonist of the second season. Unlike most other depictions of the Joker, "John" is shown to be a sympathetic and insecure man who is looking for direction in his life, despite turning into the homicidal madman the Joker is generally portrayed as. By the end of the second season's 4th episode, John will either fully embrace his inner demons and become a supervillain, or he will decide to become a vigilante and battle who he perceives as villains in Gotham City.

He was voiced by Anthony Ingruber.

John is first introduced to the audience (and Bruce Wayne) in Episode 4 of the first season, being an inmate of Arkham Asylum who does not remember his past or who he is, and not even any of the doctors know the truth.

He appears an outwardly friendly and laid-back man, but one who also possesses a violent and savage side as well, as shown when he viciously beats down two inmates threatening Bruce Wayne. The two connect whilst both being imprisoned at Arkham, John revealing some facts about Vicki Vale's past that Bruce previously did not know (such as her having been born Victoria Arkham).

John agrees to help Bruce escape from Arkham in exchange for a favor, which Bruce can choose to promise to grant or not. Either way, John helps Bruce get out of Arkham. However, to do this he makes fellow inmate Zsasz try and murder another patient. Bruce can either save the patient or use a phone to ensure his release. Regardless of the choice, John still assists Bruce in finding Vicki by informing him to locate her parents.

He later shows up in Episode 5 gleefully witnessing the battle between Batman and the Children of Arkham's forces before then appearing in the very last scene in the fifth episode, now out of Arkham.

Come Season 2, it is revealed that John has been released from Arkham and listed Bruce as his emergency contact. He later meets with Bruce at Lucius Fox's funeral and tries to call in the favor Bruce owes him. He also reveals that he's fallen in with some "interesting people" who turn out to be the group of criminals Bruce is after called "The Pact".

Using his "friendship" with John, Bruce tries to get into the Pact, with John being Bruce's primary supporter (especially if Bruce continues to treat him well). In Episode 3 of Season 2, John helps Bruce and Catwoman break into Riddler's now abandoned lair looking for information on how to get into his laptop (which Harley has possession of and wants to decrypt).

During this adventure, John shows a willingness to beat officer Harvey Bullock with a crowbar if Bruce does not intervene, and later, when Bruce and John have drinks together outside a coffee shop, John admits that he can feel "someone" inside him that is trying to get out. The words John uses in describing this "someone" makes it clear that it is a darker and more violent side of him, one that Bruce can urge him to suppress (or not). As Batman, he can also meet with John Doe and teach him how to throw a Batarang (but only if John has gotten Harley's laptop for him and not Catwoman).

Later, when both Bruce and Catwoman are in hot water with The Pact, John urges Bruce to give up Catwoman to save himself, which Bruce can choose to do or not do. Afterward, John alongside the other Pact members storms Bodhi Spa. John will assist Bruce/Batman against Bane and Mr. Freeze during the battle (and, if Batman earlier taught him how to throw a Batarang, will do so). However, during the chaos, Harley Quinn flees, leaving John Doe behind.

Heartbroken by this, John escapes himself, returning the Pact's hideout to drown his sorrows. However, when Harley Quinn returns and discovers that the Agency was there without John knowing, she punches him in the face and leaves in disgust. Bruce and Agent Avesta then stumble upon the distraught John Doe, who lashes out at Bruce for his advice and despairing over how he's lost everything: The Pact, his dreams, and Harley. However, Bruce (whether forcefully or with genuine empathy), convinces John that they have a common enemy in Harley and that they need to stop her together. John then goes to find Harley on his own.

Later, John tells Bruce his location, and Bruce goes to see him. Once at the abandoned carnival funhouse, he discovers dead Agency members; John killed them, and his story of killing them in self-defense has numerous holes in it. Should Bruce choose to believe him anyway, John happily embraces him, reaffirming their friendship. They then go off to stop Harley together.

On the other hand, if Bruce doesn't believe him, a heartbroken John vows revenge and runs off, intending to help Harley and now hostile to Bruce.

If John and Bruce leave together, he helps stop Harley Quinn on the bridge by pretending to be there to help her, only to disarm her of the bomb trigger and Lotus Virus vial. Harley angrily condemns him and vows revenge, but John has at last seen that Harley does not truly love him. Amanda Waller congratulates John Doe for his efforts and then demands that he hand over the Lotus Virus. John refuses, believing that no one should have it. Waller then coldly pulls a gun on John and tries to kill him. This sends John into a rage, and he detonates the bombs on the bridge, stabs Amanda Waller, and vows that he and Batman together will bring the corrupt Agency to justice and that it will be "so much fun".

Three weeks later, John Doe emerges as a Batman-inspired wannabe vigilante calling himself "Joker". At first still friendly to Batman and actively helping him against Waller and her flunkies, when Batman and Amanda Waller blackmail each-other into an impasse, an enraged Joker goes berserk and attacks. The situation escalates into a chaotic rooftop battle with Joker on one side, Batman on another, and Amanda Waller's forces (including a coerced Bane, Harley, and Catwoman), trying to take down both. Joker ultimately detonates more bombs, and in the chaos escapes with Amanda Waller as a hostage.

Taking her to Ace Chemicals, Joker tries to get Amanda Waller to confess to murdering Riddler (a crime she had herself tried to pin on him), but she's innocent; it's actually Tiffany Fox who is responsible. But now out of control and lost in a vigilante-minded fervor, Joker snaps completely and tries to kill Waller anyway alongside Tiffany Fox, Batman intervening to stop him. Feeling betrayed and declaring himself a fool for having believed in Batman and his way of doing things, Joker savagely murders multiple Agency members and engages Batman in a brutal fight that ends with Joker defeated and Batman too injured to get up. Joker asks Batman if he ever considered himself Joker's friend and if he enjoyed what they had together; Batman can either say yes or no. If Batman says no or says nothing Joker says from now on they are enemies. If Batman says yes Joker simply calls Batman, "One messed up guy.".

If John rushes off to get to Harley, Bruce goes to the bridge alone as Batman. John then shows up in a truck and intercepts him and Harley, saving the latter and retreating with her into the waters below the bridge after blowing it up with homicidal relish. / If John and Bruce leave together, John ask's Bruce if he can help out with taking down Harley, if Bruce says no John takes the detonator off Harley and blows up the bridge.

Weeks later, John resurfaces, now calling himself "The Joker" and sporting a more colorful appearance. He cuts open policeman Harvey Bullock and stuffs an explosive into his belly, and then later interrupts a board meeting at Wayne Enterprises. He and Harley unleash a toxic gas made from the Lotus Virus that kills everyone in Wayne Enterprises except for Bruce Wayne (including Regina Zellerbach, who Harley personally murders with her hammer). From there, Joker and Harley detonate yet more bombs, and reveal that they have several more hidden throughout Gotham that will be detonated unless their demands are met.

However, all of this was merely a ploy on Joker's part; he cares about Bruce Wayne and paradoxically seeks to destroy him but also be his constant nemesis as a means of having his friend in his life. He cares not for Harley's agenda, and in fact cuts a secret deal with Gordon to tell him where the remaining bombs are if Gordon will give him Batman. Gordon agrees to it, and Batman is brought down by Joker and his men when trying to rescue Gordon.

Stripping Batman of his armor and utility belt and throwing him in the same funhouse where Bruce first lost John's trust, he forces Bruce and those of his other friends and loved ones who Joker has kidnapped (Selina Kyle, Alfred Pennyworth, Tiffany Fox), into a sadistic game of cat-and-mouse where he needles all of them over their past mistakes and the things they are most guilty of. However, Bruce turns the tables by exposing Joker's treachery to Harley or asking for John to help save him from Harley leading to Joker attempting to stop Harley from killing Bruce, which sends her into a rage. In the chaos, Bruce frees himself and Selina, and a fight breaks out. Harley is defeated and Joker flees, with Bruce in pursuit. Whether Bruce tries to reason with Joker or not, the latter attacks him in a deranged fury, but ultimately loses the battle. Seemingly dead, Joker is given CPR by Bruce, and then asks Bruce why he saved them, and Bruce may answer from a few different choices. Joker then asks Bruce if he ever considered himself Joker's friend and if he enjoyed what they had together; Bruce can either say yes or no. If Bruce says no, Joker will stab Bruce and state he says the crulest things and he'll be the knife in his side until the end of time. If Bruce says yes or nothing, Joker will still stab him but instead say that he hopes that, whenever Bruce sees that scar, he will remember their "good times".

After the endgame credits, John is seen back in Arkham Asylum. What he does inside his cell depends on Bruce's final choices with Joker and Alfred. 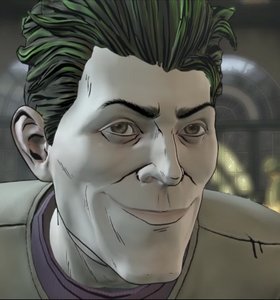 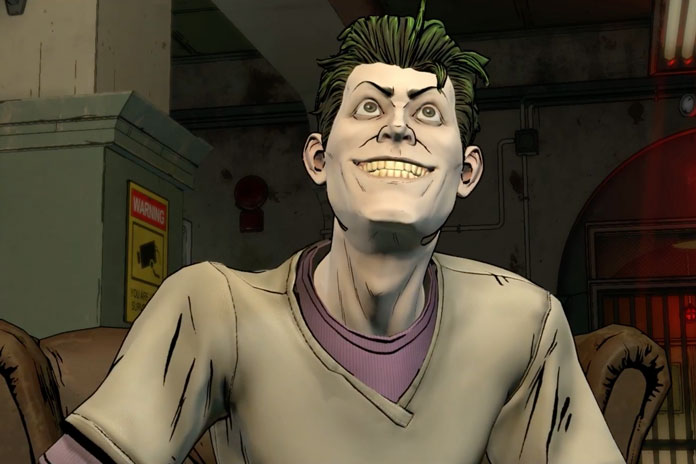 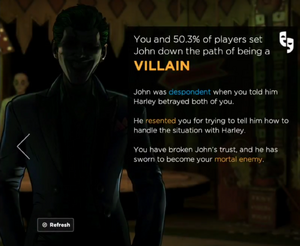 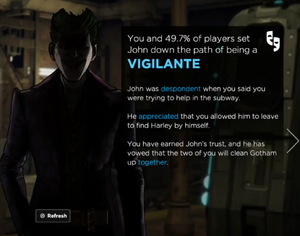 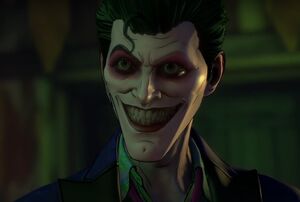 John as a villain. 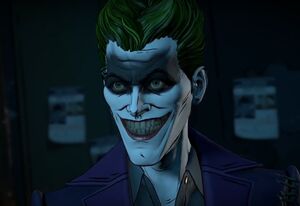 John as a vigilante. 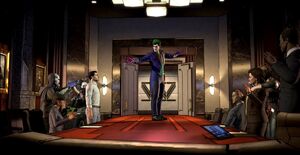 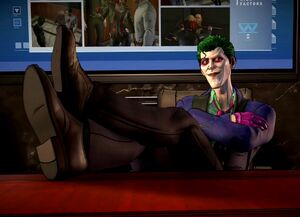 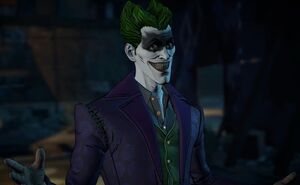 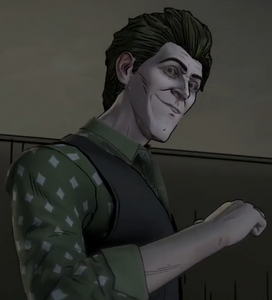 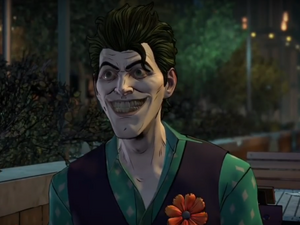 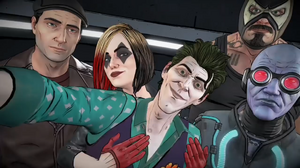 John Doe with the rest of the Pact. 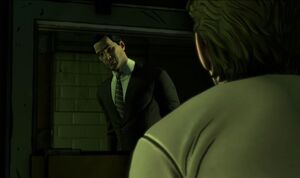 Joker receives a visit from his friend Bruce Wayne. 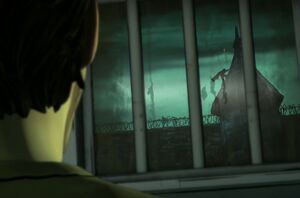 Joker takes delight that his enemy Batman is watching him. 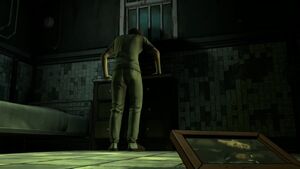 Joker angry that Batman has not appeared. 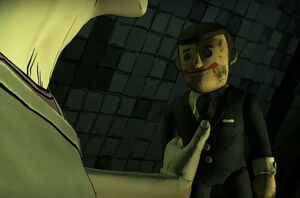 Joker draws a smile on a doll of Bruce Wayne. 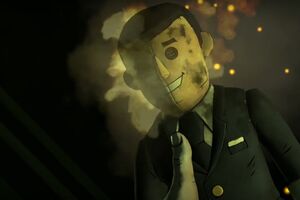 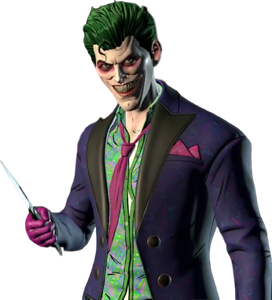 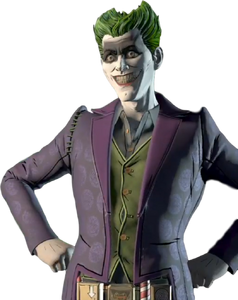 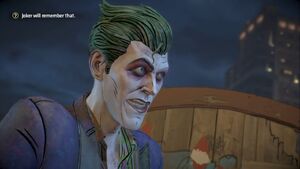 Joker's furious Villainous Breakdown as John roars in a fit a of anger after Bruce tells him he's nothing special, that he's just another criminal that Bruce has to put down.
Add a photo to this gallery

Retrieved from "https://villains.fandom.com/wiki/John_Doe_(Telltale)?oldid=3821539"
Community content is available under CC-BY-SA unless otherwise noted.