Worker aboard the Seabourn Legend (formerly)

Kill Alex Shaw and Annie Porter, and use the ship's autopilot system that he had designed in the past in order to gain his revenge upon the cruise line for his dismissal (all failed).

He was a former worker aboard the cruise ship of the Seabourn Legend, and now a terrorist and a hacker bent on revenge on the cruise line for getting fired.

He was portrayed by Willem Dafoe, who also played Raven Shaddock in Streets of Fire, Eric Masters in To Live and Die in L.A., Max Schreck in Shadow of the Vampire, the Green Goblin in Sam Raimi's Spider-Man trilogy and Spider-Man: No Way Home, Armando Barillo in Once Upon a Time in Mexico, Nikolai Diavolo in James Bond 007: Everything or Nothing, George Deckert in xXx: State of the Union, Lord Cob in Tales from Earthsea, Rat in Fantastic Mr. Fox, J.G. Jopling in The Grand Budapest Hotel, Jack Lassen in The Simpsons, Ryuk in Netflix's Death Note, Thomas Wake in The Lighthouse and Clement Hoately in Nightmare Alley.

Geiger once worked aboard the Seabourn Legend, a cruise ship whose autopilot system he designed himself. However, he was eventually laid off after he got sick from copper poisoning caused by exposure to the electromagnetic fields generated by the computers he constantly worked around. Seeking revenge, Geiger plans to destroy the cruise line in revenge for sacking his job.

Geiger first appeared getting into a Caribbean cruise on the Seabourn Legend, posing as a passenger and smuggling several detonators onboard. Inside the ship, Geiger hacks into the ship's controls and kills the captain by throwing him overboard. He then tricks the captain's first mate Juliano into evacuating all passengers, allowing himself to steal some jewels from the ship's vault. However, several passengers end up being trapped in fire doors in a hallway filled up with smoke, and Geiger sets the ship to crash into an incoming oil tanker near St. Martin.

Alex Shaw (the protagonist of the film) eventually caught wind of Geiger's plan so they and Juliano head over to Geiger's cabin armed with skeet guns. However, having anticipated this, Geiger sets his cabin to explode, though Alex and Juliano evaded the explosion unscathed. In the meantime, Annie Porter frees the trapped people with a chainsaw, and Alex attempts to slow the ship down by flooding the ballast doors before attempting to catch Geiger himself. However, Geiger evades from Alex's grasp, and explains through the intercom that he was the one who created the ship's autopilot system before his dismissal.

As Alex and the crew finally catch up to Geiger's plan of crashing with a cruise ship with the oil tanker, Alex attempts to jam the ship's propeller with a steel cable underwater, but Geiger jams the cable before taking Annie hostage on a small boat. However, Alex and a photographer named Dante manage to avoid the collision by turning the bow thrusters in the bilge pump room, which made the ship nearly avoiding the collision with the tanker, though it caused the ship to crash at a nearby shore of a St. Martin town before coming to a full halt.

With the cruise ship safe, Alex goes after Geiger, who is about to escape in a seaplane with Annie onboard. Using a speargun, Alex catches up to it and rescues Annie just as Geiger loses control of the plane and crashes into the top of the oil tanker. He is unharmed by this, but as he laughs maniacally, a spark ignites in the engine as the gas leaks from its tank, which blows the plane to pieces and kills Geiger. This causes a larger massive explosion that destroys the oil tanker, though the oil tanker's crew managed to evacuate the ship before the explosion. 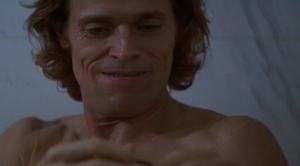 Geiger realizes that his plan is going well for a star. 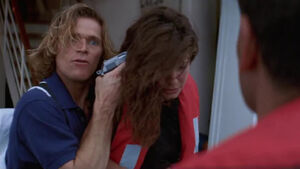 Geiger holding Annie as a hostage by gunpoint. 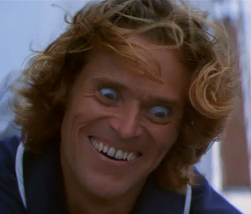 Geiger laughs maniacally before he dies

Geiger's death as he is engulfed by the oil tanker's explosion.