Defeat the Evil Superman and his Kryptonian army.

Save his home (both failed).
Prevent Superman from destroying Earth-Prime by killing him (abandoned, instead he saved him).
Prevent Morgan Edge from creating his Kryptonian army.
Defeat Morgan Edge and Leslie Larr.
Save Jordan Kent from Zeta-Rho (all succeeded).
Start a new life on Earth-Prime.
Speak to the doppelgänger version of his sister (both ongoing).

John Henry Irons, also known as The Stranger and Captain Luthor, is a major antagonist turned supporting protagonist of Season 1 of the TV series Superman & Lois.

John is a mysterious visitor from an unidentified parallel Earth that was ravaged by an army of evil Kryptonians, bio-engineered by his world’s Morgan Edge and led by an alternate Superman. After his Earth was destroyed, he arrived on Earth-Prime where he became hell-bent on proving to this world that it no longer needs their Superman.

He is portrayed by Wolé Parks who also portrayed Arcadius in The Vampire Diaries.

Born on a world different from Earth-Prime, John Henry Irons was a former student at Yale then became a ranger for the United States Marine Corps and went under the command of General Sam Lane. Years went by and eventually, John married Sam’s daughter, Lois, and they eventually had a daughter named Natalie Lane Irons who the couple named after Lois’ grandmother.

During quality time with Lois, John and his family witness Superman and his Kryptonian army destroying Metropolis using their heat vision. Presumably on the same day, John and Natalie hid in a secret facility, while Lois was giving an interview for the Daily Planet about the Kryptonians. During the interview, Superman killed Lois, shocking John and Natalie. With Natalie’s help, John acquired technology from LuthorCorp to build an exosuit, capable of defeating Superman. Nat later attempted to reprogram an A.I. and failed, leaving the device to mistake John as Lex Luthor. John then told Natalie he was leaving on a mission in an attempt to stop Superman and as they said their goodbyes, John told Natalie he was coming back.

On the mission, John and Sam Lane attempted to push back the Kryptonian army, but failed and Sam's whole unit was killed by Superman. Among those that were killed was Sam as he died in John’s arms, since then John despised Superman even more. After the battle, John tried to escape in his ship, while Superman tried to stop him until a flash of light swept over the planet killing everyone, except John.

Afterward the attack, John found himself on a strange new world, known only as Earth-Prime, without any of his family or friends. Upon being on this new world, John discovered that Earth-Prime also had a Superman with the same past as his but did not turn on humanity yet. Fearing that this world's Superman would turn, John began to study everything about Superman, including his Kryptonian name and weaknesses, and thus began plotting to take him down.

John started by attacking nuclear power plants across the United States in order to test Superman's capabilities knowing that the power plants had lead encasements, an ally that block Superman's x-ray vision. John then attacked one last power plant which then got Superman's attention and they began to exchange words. After taunting him, John and Superman engaged in a heated battle that led to them flying to Shanghai and up to the Earth's atmosphere, where Superman was stabbed in the chest with a Kryptonite blade and John then got away. John later returned to his ship, where he began plotting his next move and a search for Kryptonite which he needed to power his weapons and kill Superman.

John then takes his ship to Moldova in order to find more Kryptonite, when there, he easily defeats the guards but orders one to open the vault with the Kryptonite in it but there was none to be found. John then questions that one guard asking him where they kept the Kryptonite but he didn't know, instead he ran and John presumably killed him. Later, he goes back to his ship in a fit of rage and tells his A.I. to search for Kryptonite so he can finally kill Superman in order to prevent what happened on his world to be repeated here.

Before John Henry Irons’ whole life came crashing down, John was once a loving father and a caring father who dedicated his life to protecting his country, his home, and his family.

After his world was ravaged by Superman and his Kryptonian army, John became bitter, angry, and vengeful toward all of them and said that he would kill them. After arriving on a new world, John was likely confused and frustrated but paranoid after discovering that there was also a Superman on this world. Figuring this Superman would turn just his Superman did, he became obsessed with stopping him and killing him out of revenge for his Superman did. Despite the fact that Superman isn't like his, John ignorantly still challenged him and went out of his way to hurt him, mostly out of paranoia that he would become like his Superman. 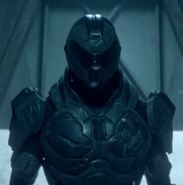