Make Chris Griffin and other boys "his".

John Herbert Silverbird also known as Herbert The Pervert, or sometimes simply Herbert is a recurring /anti-heroic antagonist in Family Guy. He is an elderly pedophile who lives down the street from the Griffin family and has an obsession with Chris Griffin.

He is voiced by Mike Henry.

Not much is ever revealed about Herbert's life before the start of events in the Family Guy series. He was revealed to be a retired military veteran from World War II who served in the Army Air Corps. He was captured by the Germans and was sent to a concentration camp run by Franz Schlechtnacht because the soldiers thought he was gay due to pictures of young boys he had in his wallet.

He first appears in the episode "To Love and Die in Dixie". He meets Chris for the first time when Chris took up a paper route. He tries to get Chris to go into his house offering popsicles, but Chris refuses. At the end of the episode, Herbert leaves 113 messages on the Griffin answering machine wondering where Chris had been.

In "The Perfect Castaway", Herbert purchases an ice cream truck from Brian Griffin, which he uses in "And Then There Were Fewer".

Chris accidentally broke Herbert's window in "The Courtship of Stewie's Father" with a baseball and Herbert convinced Peter Griffin to have Chris do chores for him. It was in this episode he had the fantasy of being Chris' wife.

In "Play It Again, Brian", Herbert is asked to babysit Chris, Meg, and Stewie. He attempts to seduce Chris several times, including trying to get him to help Herbert bathe. Meg ended up helping Herbert instead. After reading Peter and The Wolf to Chris and changing the moral to fit his own ends, Chris asks Herbert if he was a pedophile. Herbert's answer is not shown.

In "German Guy", Chris start hanging out with a different old man which is revealed by Herbert to be a Nazi named Franz Gutentag. Herbert fights and defeats him to save Chris and Peter.

A creepy, twisted predator who's name rhymes with pervert for a reason, Herbert is a sexual predator who methodically stalks preteen boys. He has a funny, cheerful, and relaxed personality despite this, causing him to appear as a harmless and friendly individual. He seldom shows much emotion outside of calm cheerfulness or raises his voice to anything higher than a light, airy whisper. His voice is eerily angelic in contrast to his goblin-like appearance and he is an amazing singer. While Herbert is not completely evil, he is still a pedophile who constantly tries to chase down and seduce Chris as well as other boys in Family Guy. He uses a variety of methods to try and catch boys and be around them, such as luring them to his cellar with popsicles, purchasing an ice cream truck in order to sell ice cream to boys, or drugging them with things like Nyquil and Tylenol PM. On top of this, almost everyone in Quahog is woefully oblivious Herbert's true intent, which allows him to stalk boys seemingly with impunity, although his schemes oftentimes fail due to his old age and frailty. Though Herbert is attracted to boys only, and as such is a gay pedophile, he seems to be against homosexual rights such as calling Brian Griffin a sick pervert for trying to get him to sign a petition supporting gay marriage. Of all boys, Herbert is most fixated on Chris Griffin.

In "The Courtship of Stewie Griffin's Father", Herbert has a dream/fantasy of being a woman married to Chris and that they have a son that looks like Chris and a daughter that looks like Herbert. Considering this along with Herbert's highly feminine voice, habit of singing female love songs, his fantasy of being Chris' wife, and dressing like the Virgin Mary at his Christmas party on The Cleveland Show, it is possible that Herbert has gender identity issues and desires to be female. If he sees his true identity as female, then he may not see his desires for boys as homosexual and thus why he disapproves of homosexuality despite wanting to have sexual relations with boys. However it is also entirely possible he was adverse to voting gay rights due to homophobic people lumping homosexuals with pedophiles and he would fear supporting the cause would arouse suspicion.

Despite his pedophilia and the wrongness of his actions, it is shown that Herbert can be a kind person who cares about others. An example is where he tried to convince Chris to stop hanging out with Franz Gutentag after discovering that the old man was the sadistic Nazi who imprisoned him in World War II, beforehand he did seem to be genuinely concerned for Chris' wellbeing and even went to try and warn Peter and Lois that their son was in danger. After discovering that Chris and Peter were being held captive in Franz' basement, he fought the Nazi in order to rescue them both. He even tried to save Franz from falling off his porch, despite their past together. 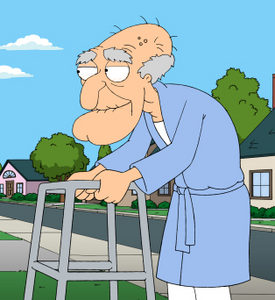 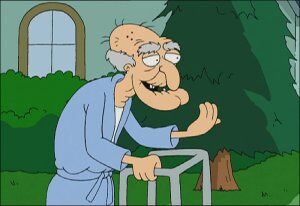 Herbert trying to lure in Chris. 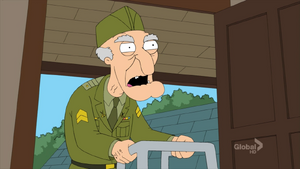