Lieutenant John Merrick, simply known as John Merrick, is the main antagonist of Disney's 1990 Norwegian film Haakon Haakonson (released in America as Shipwrecked). He is a pirate captain who poses as a member of the English military and eventually takes over Haakon's ship after the original captain, Madsen, mysteriously dies and proceeds to make life difficult for everyone.

He was portrayed by Gabriel Byrne.

Merrick has eluded the British Navy and returned home to London. He promptly kills an officer named Howell to obtain his first officer's papers.

In London, Madsen and Bosun take on Merrick, masquerading as Howell, who is familiar with the South Seas and the ways of pirates. Later, Merrick's cohort taints Madsen's cognac; he falls ill with fever and dies. Merrick is then captain. Arriving in Sydney, Merrick cancels shore leave and takes aboard a scurvy gaggle of men.

Work onboard ship soon becomes terrible for Haakon, Jens, and the original sailors, which intensifies when the new captain finds Mary (the stowaway girl trying to reach her uncle in Calcutta) and demands whomever has been fraternizing with her to show his face. Haakon admits responsibility, and the captain sentences him to be lashed with the cat o'nine tails. Jens protests, saying that whipping Haakon would be an effective death penalty, to which Merrick orders that Jens will be punished instead. However, before anyone can be flogged, the court martial is interrupted by a terrible storm that damages the mainmast, then sinks the ship. Haakon takes advantage of this to escape the doomed ship and wakes up on a deserted trpoical island.

After searching the island, Haakon discovers treasure as well as a wanted poster for an Merrick. Haakon discovers that the new batch of abusive shipmates who were brought on after Merrick's captaincy are really pirates, who arguably stored the treasure during a hot pursuit from naval forces, and will soon return to the island to extract their loot.

As Mary, Berg and Stein leave for Haakon's island the next day, Haakon realizes that Merrick and his pirates are returning to the island. Haakon and Jens managed to get help from Berg and Steine. Haakon manages to outsmart the pirates and he, Jens, Berg, and Steine return to their native Norway. Merrick arrives in a hijacked ship to retrieve his loot. Haakon and his friends free them and unite to defeat the pirates, seize the treasure, the ship and the victory. Haakon, Jens, Berg, and Steine are being chased by the pirates, but before Merrick can shoot Haakon, Mary sinks the pirates with a cannon. 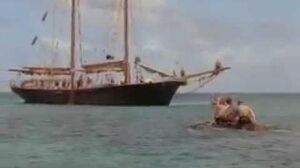