John Rainbird is the one of the main villains of the 1984 Stephen King movie, Firestarter. He was played by the late George C. Scott. 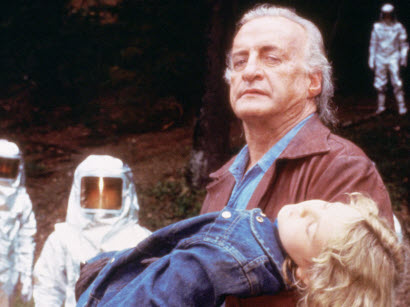 He is a killer in the service of Captain Hollister, the leader of The Shop. He murders Doctor Joseph Wanless, when he becomes a threat for Hollister.

Later Hollister sends Rainbird to capture Andy and Charlie and to end the release of information. Rainbird successfully captures Andy and Charlie and takes on the role of pretending to be an orderly. So he can get Charlie's trust, friendship, and get her to submit to the tests. Rainbird is also scared of the dark because he loses his focus.

When Charlie gets a note from Andy, she tells Rainbird about their escape. He had wanted to kill both her and Andy so he hides in the barn. He almost gets Charlie to climb the ladder to him but his plan fails when Andy enters the barn. She asks her dad if they can take Rainbird with them, but discovers the truth that Rainbird planned on killing both of them in the first place.

Rainbird tells Charlie if she comes to him then he will spare Andy's life. When Hollister enters, Rainbird kills him and nearly kills Andy. Rainbird breaks his leg when he leaps on the ground. Rainbird is killed by Charlie and he along with the rest of the villains are burned and destroyed.

Retrieved from "https://villains.fandom.com/wiki/John_Rainbird?oldid=2080356"
Community content is available under CC-BY-SA unless otherwise noted.