A Far Off Place

Hunting and poaching elephants for their tusks.

Kill as much elephants as possible.

Illegally trade the vast pile of elephant tusks in order to become a billionaire.
Eliminate Nonnie, Xhabbo and Harry at any cost (all failed).

John Ricketts is the main antagonist of Disney's 1993 live-action film A Far Off Place. He is a cruel poacher who murdered Nonnie Parker and Harry Winslow's parents and wants to sell all the elephant tusks to everyone.

He was portrayed by Jack Thompson.

John Ricketts is an elephant tusk dealer who is associated with Nonnie Parker's father, Paul. However, when he finds out that Paul is on to him, he has him and everyone else on his farm killed safe for Paul's daughter Nonnie Parker and tourist Harry Winslow who survive by poachers. As the poachers plunder the house, Ricketts realizes Nonnie and Harry are missing. Nonnie grabs explosives from the garage and attaches them to the bottom of their truck, killing several of the poachers.

Meanwhile, Colonel Mopani Theron learns of the attack and, unaware of his involvement, orders Ricketts to lead an aerial search party to find the missing children. Harry sees a helicopter, but Nonnie figures that there could be poachers and instructs them to hide. The children trick the poachers into using dummies. Nonnie watches in horror as Ricketts pulls out his gun and shoots the dummies until they leave.

Over the next two months, Theron remains convinced that the Parkers' deaths were a corporate conspiracy, and continues his tireless search for the exporters' store of elephant tusks, which he believes will lead him to the murderer. Meanwhile, the trio come across a general store until the owner's dogs chase them over a gorge. They manage to escape with only minor injuries.

A few days later, Ricketts meets a buyer at the same shop and notices that the owner is in possession of Nonnie's necklace, which she lost in the scuffle. Suspecting the children are still alive, Ricketts asks his right-hand henchman if he ensured that the bodies were buried, to which he agrees. Seeing through this lie, he shoots him dead. Later, as the trio try to reach the sea, Ricketts comes over by helicopter until Nonnie and Xhaboo thump their chests in the spiritual Bushman practice of "tapping", which summons a sandstorm and forces Ricketts to flee.

Later, Nonnie and Harry find Theron and inform him that Ricketts was the murderer. They accompany him to Ricketts' mining facility, where they find the tusks and plant dynamite there to bury them. However, Ricketts arrives and holds them at gunpoint until Harry manages to trap him under a pile of tusks. They lead him outside and light the fuse. He is unable to see his fortune destroyed, so he goes back to the mine to stop the blast and therefore ignores Theron's warning that it is too late and gets killed by the explosion. 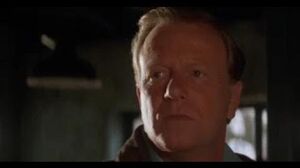 Villain Defeats- John Ricketts (A Far Off Place)
The scene where Ricketts dies of an explosion in the mine.