Herald of the Project at Eden's Gate

Forcing sinners to confess and atone.

Prepare the Cults "children" for The Collapse.

Persuade people to be protected from The Collapse by entering Eden's Gate (both partially succeeded).
Force the Deputy and Joey Hudson to both confess and atone for their sins before killing them both.
Kill the Deputy (both failed).

John Seed is one of the three secondary antagonists in the 2018 video game Far Cry 5 (along with Jacob and Faith Seed). The youngest brother, John is in charge of the recruitment of the new members of the Project at Eden's Gate, and his belief in the "Power of Yes" controls his methods of forcing sinners to confess and atone before they welcomed into the ranks of Eden's Gate and saved from The Collapse, something that can only come from as much pain as possible.

He was portrayed by Seamus Dever.

According to Joseph, John was a very happy child before an unknown event supposedly destroyed the Seed family and his parents abused him after that. One night, they threw him onto the kitchen floor and beat him until all he could say was "yes" - affirming his lifelong motto that individuals who deserve punishment for their sins, which was everyone, should accept it without resistance. He is the most sadistic of the Seed family.

John is a cult lawyer who is in command of the Holland Region area of Hope County. John is the younger brother of Joseph and Jacob Seed and the older half-brother of Faith Seed.

Like his siblings, John is one of the leaders of the Project at Eden's Gate. As the cult believes that the apocalypse is close, John has the role of forcing potential new members to repent their sins, which he does by carving the sins they are guilty of into their flesh. If they have atoned for their sins, John cuts the carved skin out of the person's body, which serves as a sign that they have successfully left their sins behind them. He was in charge of forcing members of the Project at Eden's Gate to confess and atone to their sins so they could be pure enough to join their ranks.

When a group of US marshals arrive at Eden's Gate to arrest Joseph Seed, the cult's leader. They soon find themselves fighting the Seed family and the cult. John was present when the marshals attempted to arrest Joseph along with his siblings but the cultists intervened, saved the Father and left them either stranded in Hope County or imprisoned by the cult.

John sends a message throughout Hope County, and he explains that everyone is a sinner whose every action is almost another sin but promises salvation with just a simple idea, that say "yes" that you are a sinner, seek redemption for it then confess and atone them. In the message he reveals he has the kidnapped Deputy Hudson and that the cult will be coming for all sinners, leading to the Junior Deputy (one of the few marshals who escaped) to go to war with him.

As the Deputy liberates more of Holland Valley, they are marked by John and kidnapped along with more of the Resistance. Awakening in the middle of The Baptism, the Deputy is being cleansed with many Peggies around them. However, John claims that they are not clean enough and sadistically drowns him further until Joseph intervene by reprimanding his younger brother for using their ways as an excuse for his own proclivities, stating the he shouldn't "mock the cleansing". Joseph subtly threatens that the gates of Eden might be closed for him before leaving the Deputy at John's mercy - who claims he will rip every sin they have ever committed from them until they confess or atone.

The Deputy is marked yet again, captured and brought to John's doomsday bunker with a captive Hudson. He enters with torture devices and severed pieces of flesh which he staples to a wall - the sign of atonement which he plans to do to the Deputy and Hudson. As he explains his backstory and how his parents abuse taught him about the "Power of Yes", John readies the Deputy to be branded with his sin and becomes increasingly passionate to the point of screaming his intentions. He then asks who wants to go first between them (though Hudson is gagged in this particular scene so he is only taunting the two deputies).

Attempting to rescue Hudson, the Deputy meets with John again behind a locked blast door who reveals he has finally discovered their sin of "wrath" and indulges them by sending as many angels (Bliss-overdosed cultists who are nearly immune to pain) for them to kill whilst leaving with Hudson, promising they won't meet again until they are ready for atonement as the bunker begins to fill with poisonous gas. Killing the cultists, the Deputy escapes and plans to rescue Hudson yet again by provoking John by liberating most of Holland Valley.

Provoked by the Deputy's resistance, John reclaims Fall's End and kidnaps all of his friends so that they might stand witness to their own atonement. Entering the church, the Deputy is knocked out by a cultist and when they awaken John has finished engraving "wrath" onto their chest and reveals he has kidnapped Pastor Jerome, Nick Rye and Mary May Fairgrave.

John beats the Pastor and Mary into submission to following the Atonement, yet Nick refuses - akin Nick's sin which is greed until he whispers something in his ear that makes him comply. When Nick says "yes", John holds him down and removes the skin from his chest that is marked with greed and staples it to the church wall. In this chaos, Jerome was able to swap the Word of Joseph with his own makeshift bible. John preys on the Deputy next and tells them to place their hand on the Word of Joseph and say "Yes". Unknown to John, the Deputy unveils a hidden gun and grazes John's ear forcing him to retreat back to his ranch.

John retreats to the sky in his own plane and the Deputy follows for an aerial battle which results in him crashing into the Montana mountains and finished off by the Deputy. Before they take his key, John warns the Deputy to consider that Joseph might be right about the Collapse and that they've already saved people who don't require it from them. He dies with a "may God have mercy on your soul".

After John's death, Joseph monologues about how John was not perfect, at some times not even good, but that he was still his brother and that those who are responsible for his death will be punished.

John was a kind and happy child once before his parents abused him. Despite the trauma and rage it caused him deep into his adult years, John believed that he, like all sinners, deserved his punishment and even held a degree of gratitude for them teaching him "the Power of Yes". John has made it his life mission to bestow that power on himself and others, initially through his own vices until he was taught by Joseph to give the very gift he received from his parents to others through absolution and atonement so they would be worthy to shelter from the Collapse and brought onto Eden.

Even though John may have believed his personal mission in life was to save souls, he was highly sadistic and took a great deal of personal joy in the suffering atonement caused his victims. During the cleansing he cruelly drowned the Deputy further until Joseph reprimanded him for using their sacred traditions for his own proclivities. Joseph indeed admits that he was not perfect and even a monster at times, especially when compared to the rest of the Seed family, but this was only because he was abused by their parents.

Despite his cruelty, John believes Faith is much worse than him due to her abuse of her "angels", insinuating that John treated (or at least believed he did) those he saved very well. 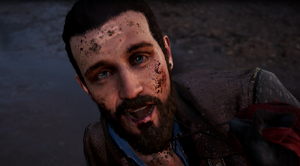 John upon his defeat, moments before his death.
Add a photo to this gallery

Retrieved from "https://villains.fandom.com/wiki/John_Seed?oldid=4150409"
Community content is available under CC-BY-SA unless otherwise noted.