Obliterate the houses of a poor Chicago neighborood, evict its inhabitants and replace it with luxury condos.

Have Aaron Stampler condemned to death (both failed).

John Shaughnessy is the secondary antagonist of the 1996 thriller film Primal Fear.

He was portrayed by the late John Mahoney, who also played the Management in Burn Notice and Robert Terwilliger Sr. in The Simpsons.

John Shaughnessy is the District Attorney of the Illinois State. He has many connections with powerful men. He is first seen assisting at a chorale organized by his friend the Archbishop Richard Rushman. He and his entourage are joined by Martin Vail. The latter is convoked in Shaughnessy's office the next day in the morning.

At the office, he, Martin and another guy are discussing about a client named Pinero. Shaughnessy says he wants to give Martin $1,500,000 for Pinero leaving the state.

Later, the Archbishop Rushman is violently killed and a young man named Aaron Stampler is arrested. To his request, Janet Venable, the best attorney of his another friend Bud Yancy, is presented to Shaughnessy. John entrusts her with the mission of trying the case but with one absolute condition : that the death penalty be applicated to Stampler.

During his investigation in tha case, Vail discovers that Shaughnessy was an investor in a project called "South River Development Corporation" under Rushman's charity, Rushman Foundation. The project consisted of taking all the buildings around the church, tearing them down and turning them into high-rent condos. However, a local citizen went to talk with the Archbishop and convinces him to renounce on the project. Shaughnessy lost millions because of this. Vail and Shaughessy meet in a restaurant and the corrupt attorney makes a speech about how he keeps the city in peace. He then asks about Pinero. Vail answers he is a grownup. Shaughnessy then questions him about his assistant who looks in the financial affairs of the archbishop. Because of this, Vail confronts him by asking how much he lost when the religious man withdrew from the project. This earns him a threat from Shaughnessy.

Vail has a tape dropped off at Venable. It shows the sexual abuse that Rushman inflicted on his altar boys. Shaughnessy realizes this and confronts Venable about it. He strongly suggests that she destroy this tape and find evidence to convict Stampler otherwise she will have no future in her career as a lawyer.

The next day, he is convoked by surprise as a witness on the trialby Martin Vail. He reveals he is a honorary member of the board of the Archbishop foundation. He also reveals that he invested $60 millions in the project. Hwever, he claims that the project ended because of different opinions about the costs. He also lies by telling he has never heard about the sexual deeds committed by the archbishop. But Vail quickly dismisses this by showing a document about a police officer reporting at his supervisor revealing that Shaughnessy knew about this and decided to cover it up to continue his affairs without trouble.

After this, he calls the Judge Miriam Shoat to inform her there will be no mistrial. This is his last move in the movie and he is not seen, heard or mentionned afterwards. 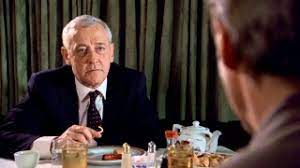 Shaughnessy eating at a restaurant. 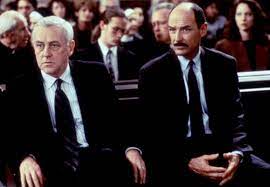 John Shaughnessy assisting at the trial.