Beat the slaves for his own pleasure.

Kill Solomon for daring to stand up to his abuse (failed).

John Tibeats is an antagonist in 12 Years A Slave and one of the main reasons that Solomon was forced into an even more brutal existence as a slave: since it was Tibeats unreasonable hatred and cruelty that forced Solomon's original owner to sell him to a far worse one.

He was portrayed by Paul Dano, who also played Percy Dolarhyde in Cowboys and Aliens and a young James Costa in Taking Lives.

Tibeats worked as a carpenter at Solomon's first owner's plantation shortly after he was illegally sold into slavery in the South, while the plantation owner was a fair man who cared for his slaves (despite obviously exploitating them) Tibeats was the polar opposite and embodied the deep hatred Whites of the time had against African Americans.

Tibeats grew to especially hate Solomon due to the fact that Solomon was an African American who showed himself to be clever, capable, and thus a threat to Tibeats worldview that slaves were inferior, stupid and sub-human.

Tibeats would eventually snap and try to unjustly beat Solomon after the pair got into an argument over following instructions - due to the absence of other staff at the time the confrontation grew to a dangerous level and Solomon overpowered Tibeats and in a fit of frustration took the man's whip and beat him with it repeatedly.

The fight was broken up by a senior plantation staff member but Tibeats was humiliated, furious and demanding blood - Solomon was instructed to stay at the plantation and not run or he could face even worse punishment.

Despite this Solomon was captured by Tibeats and a gang of thugs, who attempted to lynch him - while their attempt failed Solomon was left hanging by a tree for many hours before he was eventually ordered cut free by the plantation owner and taken inside to recover.

Unfortunately for Solomon the plantation owner was fearful of Tibeats and his gang, refusing to believe Solomon was a "free man" and instead decided that the only way Solomon (now called "Platt") could survive was to be sold to the notorious slave-owner, Edwin Epps.

Tibeats is one of the more openly malevolent and cruel characters in an already dark and cruel story, his racism towards African Americans extends far worse than even most in the South and he takes great delight in antagonizing slaves for little reason : this behavior was negative even to slave-owners of the time period as excessive brutality towards slaves would, obviously, lower their work rate.. this makes Tibeats in line with Epps in regards of being a "slave-breaker", a man who was more concerned with breaking the spirit of African Americans for his own personal pleasures than maximizing profits from the slave labor they provided.

Tibeats is also a coward and uses excessive violence to try and intimidate any of his victims from rising against him, this is shown when he is horrified by Solomon overpowering him and screams that Platt "will not live to see another day".

Tibeats is also visibly shaken and infuriated by the attack, to the point of murder - seeking vengeance (while Tibeats was indeed excessively cruel it is worth noting that a great many whites of this time period would have supported severe punishment of a slave who fought back since they deeply feared revolts).

In the end Tibeats was such a vicious and malicious presence that it was decided that the only way Solomon stood a chance of survival was to be sold onto another owner.

It was also noted that Tibeats hated Solomon due to the fact Solomon was clever and favored by Ford, while Tibeats was rather uneducated - in the South many hated and feared slaves who were educated in any manner and often killed them, out of fear of revolt as well as deep xenophobia, since it was easier to mistreat slaves if they were kept ignorant and subservient. 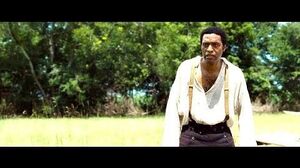 12 Years a Slave Master - John Tibeats and Platt Fight
Add a photo to this gallery
Retrieved from "https://villains.fandom.com/wiki/John_Tibeats?oldid=4124786"
Community content is available under CC-BY-SA unless otherwise noted.