Kill as many women as possible (partially succeeded).

He was portrayed by Rob Mello.

John Tombs was a serial killer who specifically targeted women. What's known is that he's responsible for the deaths of 6 women prior to the events of the film-though according to him, he's killed a dozen more in the past and buried them all in the Arizona desert. At some point he was caught and arrested but he fought with the police officers, got one of them killed and himself shot in the shoulder.

This earned him a trip to the campus hospital at Bayfield University. One of the nurses, Lori Spengler, had been trying to poison her roommate, Tree Gelbman, with her cupcake on her birthday due to Tree having an affair with her Professor, Dr. Gregory Butler (who Lori had also sought an affair with). But Tree never ate the cupcake, so Lori decided she would frame Tombs as a backup. She put a baby mask on Tombs when he was unconscious (the same mask she would wear when she killed Tree) and loosened the straps on his bed so he would escape and make it look like he killed Tree. After Lori kills Tree the first time, Tree undergoes a time loop that repeats her birthday every time she dies.

During each loop, Tombs would escape and kill a security guard at the hospital cause Tree never ate the cupcake.

When Tree finally suspects Tombs as her killer after hearing about him on the news in another loop, she decides to go after him at the hospital but while there, Tombs kills the security guard, takes his gun and escapes from his room. Tree attempts to defend herself by using a fire axe, but Tombs shoots it out of her hand and then shoots the secretary dead. Her friend, Carter Davis, tackles Tombs and disarms him but is killed while protecting her. Tree manages to incapacitate Tombs but realizes that if she stops the loops, Carter will stay dead. This in turn drives her into going up to the bell tower and hanging herself-much to Tombs’ amusement.

Tree in the next loop after resolving to be a better person prepares to go after Tombs. She sets her watch for thirty minutes so that it would go off during a blackout, carefully steals the security guard's gun and tells him to call for backup. She enters Tombs' hospital room and tries to shoot him while he's still asleep but the safety is on. Tombs gets up and fights Tree by slamming her into the wall. When the blackout occurs, she uses it to escape his line of sight and shoots him to death. Tree then finally eats the cupcake that Lori gave to her after her date with Carter and falls asleep not knowing that the cupcake was poisoned. After Tree finally discovers Lori as the killer the two engage in a fight which results in Lori being killed out of self-defense. Due to this it can be safely assumed that Tombs remained in the hospital and was eventually taken to jail.

After Tree is knocked back into another dimension, she sees a news report about Tombs being taken into the hospital and goes there that night to kill him. Grabbing a fire ax, she is caught by a police officer and arrested. As he is escorting her out the babyface killer appears and kills the cop before pursuing Tree. Lori rescues her but while trying to take her to safety through an under construction area she is killed as well. Tree escapes the killer by falling to her death ending up back in another timeline.

After constantly dying and waking up to be sent to the hospital. Tree sees Gregory but he doesn't know her in this timeline as she is not one of his students and is instead having the affair with Lori. She tells him to get Tombs away from Lori. After escaping and stealing the cops gun, she goes to find Lori dead. Tombs appears and is shot twice by Tree. She asks the wounded Tombs who freed him before the killer appears again and grabs Tree to get the gun out of her hand. She then shoots a tank of flammable gas killing them both in the ensuing explosion.

In another time loop, while having a tender moment with her mother Julie, Tree once again sees a news report that Tombs has escaped again and has killed Lori, Carter and the cop. Tree realizes she has to stop the loop from closing, or else Carter and Lori will stay dead. She grabs the car keys and rushes out, trying to reach Ryan but fails as he and the others are gearing up for the reactor to go off. Tree then drives toward an electrical plant and charges into a box just a second before the reactor goes off once again killing herself.

In another timeline, Tree goes to the hospital that night to save Lori. She gets to the room with the cop’s gun and kills Tombs before he can attack saving Lori. The killer is later revealed to be Gregory Butler who wanted to silence Lori for the affair.

Before they can run, Gregory’s wife Stephanie shows up to shoot Lori. She hands the gun to Gregory to kill Tree, but he shoots Stephanie first.  Tree lures Butler to a room containing a high powered magnet without him noticing. Tree turns the magnet on and he is caught by it in a metal chair. Tree then kills Butler by stabbing him through the chest with a screwdriver. Due to this it can be safely assumed that when Tree goes back to her own dimension, Tombs still remained in the hospital and was taken to jail or prison. 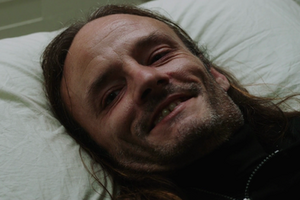 Tombs grinning after Tree fails to shoot him. 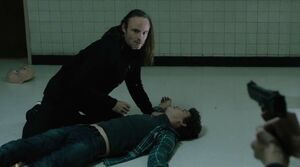