Lieutenant of the British Army (formerly)

Getting what he wanted.

Get the treasure of Monkey City (failed).

John Wilkins is a supporting antagonist of the 1994 Disney live-action film Rudyard Kipling's The Jungle Book.

He was portrayed by Jason Flemyng.

Serving as a British lieutenant, Wilkins acts as a right-hand man to Captain William Boone. He first appears when he witnessed Boone fighting out Mowgli in the jungle. He wields his gun at Mowgli, despite Katherine Brydon to leave Mowgli alone and stating that Mowgli is quite harmless. Wilkins ignores and attempts to shoot Mowgli, but misses after hearing the roars of Baloo and Bagheera, a bear and a black panther being close friends of Mowgli.

Despite this setback, Boone and Wilkins were able to capture Mowgli (thanks to Buldeo and Tabaqui) and confine him in a cell to be tortured by Sergeant Harley. However, Kitty learns that Mowgli was a former childhood friend of hers who was lost in the jungle and decides to release Mowgli to reintroduce him into civilization. Boone is opposed to this at first, but Wilkins suggests to let this be, saying that it might be a way to get Mowgli talk.

Upon looking at the dagger that Mowgli has got, Boone, Wilkins, Harley, Buldeo, and Tabaqui conspire to have Mowgli lead them into the lost city of the jungle (ruled by King Louie, Kaa, and the Bandar Log) where it was found. To that end, they tried to capture Mowgli, but that failed thanks to Baloo, who ends up being shot by Boone and Wilkins. Boone then has Buldeo and Tabaqui to kidnap Kitty and her father Colonel Brydon to coerce Mowgli into leading them into the city, despite Wilkins expressing his remorse to Brydon over his treason.

However, the jungle was too dangerous for the men to pass through. Harley ended up being sucked into quicksand (despite Wilkins' attempt to save him), and Tabaqui ends up falling to his death on a cliff after a fight with Mowgli. Despite his attempts to kill Mowgli, Wilkins ends up accidentally shooting Buldeo in the leg, and Buldeo angrily swears to kill him for that before leaving. Upset by this, Wilkins turns around, only to discover the tiger Shere Khan, who is furious at him for shooting down Baloo for fun. Wilkins tries to run away, but Shere Khan catches Wilkins and mauls him to his death, and his dying screams are heard by Boone, who calls to him, but no answer.

Boone and Wilkins about to shoot down the bear Baloo.

Wilkins trying to save Sergeant Harley (to no avail).

Wilkins mourning for Harley as the others arrive to the scene.

Wilkins being confronted by an angry Shere Khan for shooting Baloo.

Wilkins being attacked by Shere Khan.

Wilkins being mauled to his death by Shere Khan. 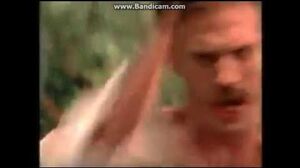