Enjoys both debauchery and revelry.

Doctor Johnathan Faustus, often simply called Faust, is a German occultist and alchemist in the 15th century, the legend, and subsequent books and plays, about him, has become the earliest detailed story about a man who sold his soul for power and coined the phrase "Faustian Bargain".

The Legend of Dr. Faustus

Johnathan Faustus was an alchemist and medical doctor in the late 14th and early 15th century Germany. While at first he was a pariah feared for his rumored practice of witchcraft he became a community savior when a plague spread through the town of Staufen im Breisgau. Faustus did everything he could to help his people applying his knowledge of both medicine and prayer. Staufen's people referred to Faustus as the "Doctor of Divinity" for his efforts combating the plague but Faustus himself considered himself a failure since all he could do was treat the victims and not cure them. One day in his efforts he happened upon a note in one of his books on how to summon a demon, though he knew about it before-hand he had not undertaken the ritual because he had never considered anything worth consorting with demons, until then when he was helpless to save hundreds of people. Faustus undertook the ritual at midnight under the full moon at the crossroads, creating a summoning circle and staying inside it during the summoning.

Out of the night mists stepped a friar with a darken face. The "friar" politely asked what the doctor was doing, Faustus said he wished to make a deal and the friar humored the notion while asking if he would kindly step outside of the circle and speak with him about it. Faustus knew it was a trick and that the circle was all that protected him from a demon's powers. Dejected, the "Friar" asked where Faustus would prefer to discuss business. Faustus told the "Friar" to come to his house at midnight in two days. Two nights later an extravagant jester appeared in Faustus' study, Faustus was waiting with his room warded to protect him from any demonic forces that might be used against him. The "jester" introduced himself as "Mephistopheles" and asked what Faustus wanted. Faustus was an old man so he knew if he sold his soul for power he would likely not have time to enjoy it so he asked for eternal youth and the power to heal the sick. Mephistopheles countered-offered Faustus' request offering him instead 24 years of youth as a warlock, saying he could use the magic he got from being a warlock as he saw fit. 24 years of youth and power seemed fair and Faustus agreed to sell Mephistopheles his soul and Mephistopheles presented him with a contract. Mephistopheles asked Faustus to spill a few drops of his own blood and once the blood was split Mephistopheles used the blood to fill a small quill pen and showed Faustus where to sign the devil's contract.

After Faustus signed himself away to Mephistopheles, the demon proudly proclaimed ownership of Faustus' soul then told him to grab hold of his cloak. Mephistopheles took flight through the night sky as a phantom with Faustus holding on and being dragged along the way. They arrived at the lair of a witch and Mephistopheles bayed she provide Faustus with a potion of youth. The witch obeyed her master and mixed up a formula for Faustus to drink, no sooner had Faustus swallowed it than he saw his hands were that of a young man's. The witch gave Faustus a mirror and Faustus saw himself as a handsome teenager. With his youth secured Mephistopheles told Faustus that he was at the doctor's beck-and-call. All Faustus had to do was ask him to do something, with the exception of releasing his soul, and Mephistopheles would make it so. Faustus felt he was in need of spiritual guidance and so he wanted to visit Rome; no sooner had he wished it than he was whisked off to Rome. Before he could seek spiritual guidance Faustus saw a beautiful Roman noblewoman and decided to put his new youth to good use, discovering the thrill of sexual conquest. The first act of lust was so invigorating to Faustus, who had lived a life of piety up until then, that he became addicted to indulging all his vices.

Eventually Faustus discovered a young devoted Christian woman named Gretchen. When Faustus attempted to court Gretchen he found she was not won over by his attractive young looks, which made Faustus want her all the more. Faustus would spend days following her and wooing her. Gretchen became quite charmed with Faustus but ultimately refused his advances and said as much as they had in-common and she found him interesting, she felt something wicked about him. Faustus overtime realized Gretchen would have warmed up to him if he still had ownership of his own soul, but without it she was unable to grow empathetic with him. Faustus became depressed he was not able to win her love despite her fondness of him.

Faustus' vices and then depression had made him forget about all the good he wanted to do with his powers and in his malaise Faustus began to spend his spare time without Gretchen at witches' parties, with prostitutes' and at bars; Through it all he was followed by a Mephistopheles who appeared in public in the form of a large black dog. At the Witch parties Faustus used his powers to defile holy places. Once Faustus realized he would be denied love and all he could enjoy was sex, his sexual conquests quickly became dull and empty to him. Once at a bar Faustus was bothered by some young men, Faustus had become so embittered that he bewitched the young men and made them slaughter each-other. Faustus thought the possessed youths killing each-other would be entertaining or horrifying but all he felt was emptiness and left while the two men were still tearing each-other apart.

Eventually Gretchen died and Faustus fell into a deep deep depression, not only because of losing his love but because he had never won her love. Faustus could not even attend the funeral because it was a holy ceremony. As Faustus watched Gretchen's funeral from afar he realized that he would never see her again, not even in death and began to seriously consider the ramifications of what he had done for power. Faustus finally used his powers to go back to his home and cure the plague completely. After curing the plague Faustus told Mephistopheles he needed some time alone, in-light of Faustus' depression Mephistopheles honored the request. When Mephistopheles left, Faustus swore off his powers and made up his mind to never call back Mephistopheles. Faustus spent his remaining years helping his community and warding his mansion for the day his time was up. Faustus became a born-again-Christian and hoped he could earn his way into heaven to see Gretchen, he made friends, recorded his life and spent years dreading Mephistopheles' return.

On the night of the twenty-forth year since his pact, Faustus invited his friends from Staufen to his house, saying he did not want to be alone that night. Before they arrived he donated all his remaining money to the church. At Faustus' party he served a great feast with drinks, delicacies and all the creature comforts. Despite the extravagance there was little joy at the party, Faustus was solemn and behind his humorlessness his friends detected a creeping dread. Faustus begged his friends to stay the night and to cheer him up they did. That night Faustus' friends awoke to hear what sounded like a ravenous dog at the front door, they were all too afraid to leave their beds but the barking and howling became louder and more vicious. Soon they heard wood splinter and the creature running through the house, it rushed straight passed their door and down the hall. A loud crash was heard followed by Faustus' blood curdling screams and then deathly silence.

When the sun came up Faustus' friends went to check on the house, the front door was torn to sherds and there was a path of destruction leading to Faustus' master bedroom. There was blood all over the room and several arcane and holy wards painted and carved across Faustus' bedroom from wall to wall and ceiling to floor, but no sign of Faustus. For years the house stood, said to be a haunted place and the stuff of legends even after books and plays were written about Faustus. Some residence of Staufen claimed at night during full moons one could catch a glimpse of the figure of a man torn to shreds staring out the window of the master bedroom in Faustus' old manor. The manor stood for centuries in Staufen im Breisgau, it was finally destroyed during World War I, no one made arrangement to rebuild it after the War ended.

The above is the original legend, or at-least the earliest established legend, however with many different books written and a few formal plays there are alternate versions of the story. 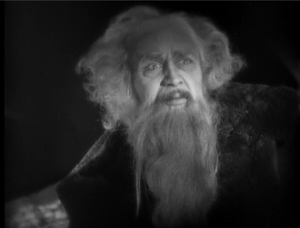 Gösta Ekman as Faustus in the 1926 film Faust 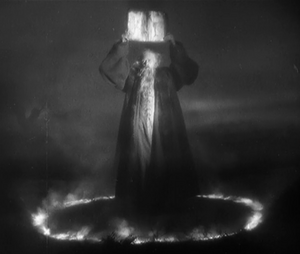 Faustus summons Mephistopheles
Add a photo to this gallery
Retrieved from "https://villains.fandom.com/wiki/Johnathan_Faustus?oldid=3481830"
Community content is available under CC-BY-SA unless otherwise noted.