Johngalli A is a minor antagonist in JoJo's Bizarre Adventure: Stone Ocean. A nearly-blind assassin, Johngalli is an assassin and a loyal minion of Dio Brando, and seeks to kill Jotaro and Jolyne for the death of his master. He wields the Stand Manhattan Transfer.

He was voiced by Satoshi Hino (who also voiced Ainz Ooal Gown and Kamui) in Japanese and David Mantranga (who previously voiced Bertolt Hoover) in English.

A loyal follower of Dio, Johngalli A is a former soldier who even despite him being nearly blind due to cataracts, is a master at assassinating targets. Desiring the death of Jotaro for him killing his master, Johngalli A intentionally got himself sent to Green Dolphin Street Prison for murder while Enrico Pucci became the jail's priest. Having some thugs toss a random man into the streets for Jolyne and Romeo to run over and paying the judge bribe money, Johngalli A is responsible for Jolyne being framed for murder.

Johngalli A makes his first appearance when Jotaro goes to pay a visit to his daughter, with Johngalli A in the showers to attack. Inside Whitesnake's dream realm, Johngalli A first sends out Manhattan Transfer to the visitation room while the Stand's master snipes from afar. Even with Jolyne tripping the fire alarm to try and trap it, the Stand keeps on its "reading" tactic. Following Emporio into the sewer, Johngalli A tries to stalk and land a shot on the hiding child and even shoots off the bolts to the pipe he was hiding in, but Jolyne uses Stone Free to trap the Stand before delivering a hit hard enough to destroy it. Moving to the ceiling for an ambush attack, the illusion of Johngalli A is killed when Jotaro uses Star Platnium strikes a pipe, giving enough pressure to have the gas to cause a explosion. However, this is only inside the dream Whitesnake created, and the real Johngalli A lives on.

After Joylne's awakening after Dio's bone causing a wound and Jotaro's using Stone Free, father and daughter eventually truly find Johngalli A in disguise, shooting a guard dead. Using Manhattan Transfer, Johngalli A teams up with Whitesnake to deal a pincer strike, with Whitesnake being able to take Jotaro's Memory and Stand Discs. Joylne uses Stone Free's stings to block the fired shots and eventually plug Johngalli A's gun. Trying to get them out, Jolyne quickly ties his feet together and although Johngalli A tries one last trick by attempting a false surrender before firing again, Jolyne pummels Johngalli A into submission.

The final thing a wounded, defeated Johngalli tries is to ask Whitesnake to help him back to his cell, only to be shot dead and his death made to look like a suicide.

Johngali A is of a average height and build, with long whiteish-blue hair, white eyes, and spiral markings on his cheeks. For clothing, Johngalli A wears a light blue, circular-cut shirt, a red studded tie, and indigo pants. Johngalli A also has a large tattoo of the Earth on his back. In the manga, his hair and tie are pink.

Johngalli A is fanatically loyal to his master, even despite possibly never meeting the man in the flesh himself. Due to this, Johngalli A also has an extreme grudge towards the Joestars, framing Jolyne for murder so he can kill both her and her father in prison.

Manhattan Transfer, although unable to attack for itself, is able to help its master successfully assassinate his target. The first of its two abilities is reading the wind around it to "read" the movement of the air to sense where the target is and what they look like. Manhattan Transfer can use this ability to he incredibly precise, dodging drops of water to find and hunt down hidden targets. Although this ability is good, it does run the risk of misreading some gasses as air, confusing it. The second ability of the Stand allows it to redirect bullets Johngalli A fires from his sniper rifle, shooting around cover and hitting blind spots. These traits makes Johngalli A an expert marksman. 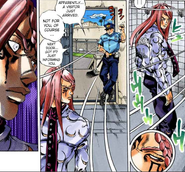 Johngalli A with his sniper rifle disguised as a cane.

Johngalli A shifting his cane into its true form.

Johngalli A shooting down a fly mid-flight.

Johngalli A hiding from the heroes in the ceiling of the sewer.

A disguised Johngalli A shooting a guard dead. 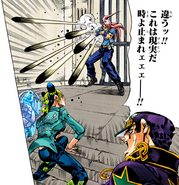 Johngalli shooting at the heroes. 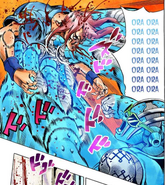 Johngalli A being attacked by Stone Free.