Johnny Allenwrench is the main antagonist of the Regular Show Halloween special "Terror Tales of the Park III". He only appears in Rigby's story. He was the spirit of a serial killer that got trapped into a bed.

He was voiced by William Salyers.

Rigby buys a bed from a company called UMÄK, not realizing that Johnny's body is in the box. After talking to Mordecai in the kitchen he brings the bed into his bedroom to assemble together, Rigby tries to assemble the bed by himself, but fails through attempting for four hours, afterwards he gets Skips to help build the bed which was completed by seven hours.

After assembling the bed Rigby lays down on the bed and finds it very comfortable, he then turns on the television, eventually Rigby tunes in to a live news channel where the news reporter asks a question, "Did you buy a bed recently?" Rigby replies by saying "Yes", the news reporter says this may have been a fatal mistake, he then explains during a shootout with police at a UMÄK factory, Johnny Allenwrench, a potential murderer fell into a UMÄK machine where he was manufactured into a bed, the reporter then goes on to say due to a clearing error the bed was shipped out to stores, and now the company is reclaiming the KILLÜRGEN beds back. Rigby then says that he feels sorry for "The loser who brought that bed", but after finding out his new bed was made by the same company, he realizes he's also "One of those losers". Eventually, the news reporter receives the code for the bed that contains the murderer, he then reads the code out saying' "If you have this bed code number you are sleeping on a murderer, 623570406 the last number is smudged he grabs his glasses and says it is an 8".

The bed then molds and captures Rigby within it. The bed then threatens Rigby with a hex key, however, Benson tells him that he'll give him a job if he lets Rigby free. The next day, Johnny is shown watering some flowers when he suddenly attacked by the groundskeepers who cut him down into a few pieces of wood. The scene then opens out, to show Benson and Rigby, who were watching the whole thing. Benson congratulates Rigby on planning the ambush, whilst Rigby congratulates Benson on lying to Johnny's face. 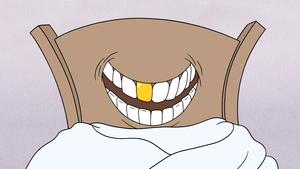 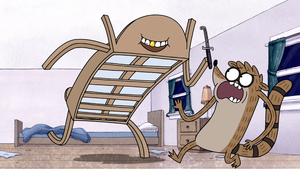