Villains Wiki
Register
Don't have an account?
Sign In
Advertisement
in: Serial Killers, In Love, Movie Villains,
and 19 more

Killing the living for sport.

To become the most infamous killer in history even after his own death as the Grim Reaper (failed).

Kill Frank and Lucy (succeeded, yet ends up failing).

John Charles "Johnny" Bartlett is one of the two main antagonists in the 1996 horror film The Frighteners. He is a prolific and vicious mass murderer who continues his work in the afterlife, focusing on increasing his body count as a form of competition with other famous murderers. He comes back from Hell, able to attack the living and the dead, as the ghost with powers to transform into a Grim Reaper,

He was portrayed by Jake Busey.

In 1963, he worked as an orderly at a hospital. But he soon lost his mind and began killing patients and hospital workers, especially in the hospital's chapel. With the assistance of his girlfriend, Patricia Bradley, they kill and mark numbers on the victim's heads (twelve in all). They are caught, with Johnny proclaiming that he is proud to have killed one more than another serial killer, Charles Starkweather. Patricia goes to prison, while Johnny receives the electric chair and is executed for his crimes.

27 years later in 1990, Patricia is finally released and uses Ouija boards to contact and resurrect Johnny. They continue killing again by Squeezing both organs, Hearts (Heart Attacks) and Brains (Strokes) to his victims, starting with Frank's wife. Johnny then disguises himself as the Grim Reaper. During this time, Johnny racks up 24 more murders. Local psychic, Frank Bannister, begins predicting the people who are going to die, and becomes a suspect in the eyes of FBI agent Milton Dammers.

Frank realizes the truth and Johnny returns to his girlfriend. She viciously kills her mother and is about to kill Lucy who was trying to help her. But Frank comes to the rescue and they hide and run in the now vacant hospital where it was abandoned after the murders years ago. Patricia chases them with a shot gun. She succeeds in killing Frank by choking him to death with her gun. Frank's ghost then seizes Patricia's soul and takes her with him through the ethereal portal known as the Corridor of Life.

Johnny chases after him to rescue his girlfriend and manages to get her back. Frank enters Heaven, as Johnny taunts him over how they will go back and kill more. Frank's ghost friends tell Frank to step back and they watch as the portal became the bloody and horrific stomach of a giant worm-like creature, that takes both Johnny and Patricia to Hell, ending their rampage for good.

0000224449-1.jpg
Johnny Bartlett on a documentary about the hospital shooting 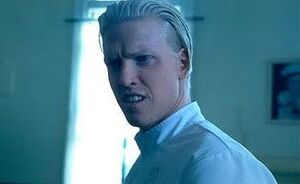 Johnny Bartlett when he was alive before and after the murders. 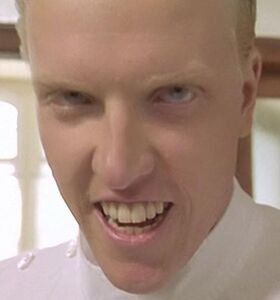 Johnny Charles Bartlett, during the murders he committed and before his death. 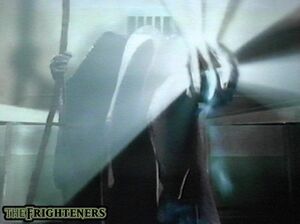 The Grim Reaper (Johnny Bartlett) steal the spiritual energy of another victim.

An urn which contains the ashes of psychopathic mass murderer Johnny Bartlett.

Johnny Bartlett as The Grim Reaper killing somebody.

Johnny Bartlett and Patricia Bradley about to kill Frank Bannister.

Johnny Bartlett and Patricia Bradley about to get dragged to Hell.