Villains Wiki
Register
Don't have an account?
Sign In
Advertisement
in: Mature, Male, The Sopranos Villains,
and 17 more

Captain of the DiMeo crime family

Giovanni Francis "Johnny Boy" Soprano is a posthumous antagonist in The Sopranos and a major character in its 2021 prequel film The Many Saints of Newark.

He was the captain of the DiMeo crime family and founder of the Soprano crew, husband of Livia Soprano and the father of Janice, Tony and Barbara Soprano.

He was portrayed by the late Joseph Siravo, who has also voiced one of the Sharks in Shark Tale. In the film, he was portrayed by Jon Bernthal, who also played Al Capone in Night at the Museum: Battle of the Smithsonian, Shane Walsh in AMC's The Walking Dead, Grady "Coon-Ass" Travis in Fury, The Punisher in Netflix's Daredevil and The Punisher, Trigon in Justice League vs. Teen Titans, Braxton in The Accountant and Cole D. Walker in Ghost Recon: Wildlands and Ghost Recon: Breakpoint.

Johnny Boy was a mobster and was only married to his wife Livia Soprano because it was her only way out of poverty. He had three children, Janice, Tony Soprano, and Barbara, who he sometimes beat (according to Tony the belt was Johnny's favorite "child development tool". Despite this Johnny did sometimes show affection for Tony.

At one point Johnny was away in prison but the family spared Tony's feelings by lying that Johnny was being a cowboy. Johnny used Janice as a cover to meet his criminal associates at an amusement park which caused Tony to feel less loved by his father.

Johnny was repeatedly unfaithful to Livia. According to Tony this was only because Livia Was always cruel to him but it's possible he would have been a bad husband no matter what. As a child Tony saw Johnny cut off the finger off Mr. Satriale who owed Johnny money. When Johnny found out Tony had seen it he convinced Tony that the guy brought it on himself by not paying.

while Livia Was having a miscarriage Johnny was sleeping with his mistress Fran Feltstein. After the baby's death Johnny forced Tony to cover for him. At some point Johnny also gave Tony's dog Tippy away to France which devastated Tony. Johnny used his influence to save Tony after he robbed Feech La Manna's card game. Later on Johnny ordered Tony to kill bookie Willie Overall when he was only 22. Paulie Gualtieri used this as evidence that Johnny loved his son which Tony did not seem convinced by. Johnny later died from cancer.

Johnny Was incredibly sadistic and self-centered. He never had much time for any of his family and treated them badly. He believed he was always justified no matter how awful his treatment of people was. Johnny also had a sense of arrogance and confidence. Despite these flaws (or perhaps because of them) He was well-liked member of the organization.

For all Johnny's bad qualities he did have some capacity to care for others. Junior mentioned that Johnny made sure to leave his family with a "package that could choke a fucking elephant" after his death as well as providing for their mentally ill brother Eckley. He also showed favoritism and generosity with his Jewish friend Hesh Rabkin by not taxing him. However it is made clear that Johnny always put his own needs before anyone else's and felt little remorse for that. 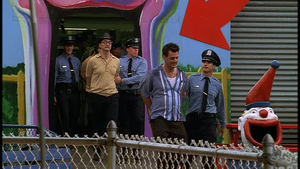 Johnny Boy arrested along with a young Uncle Junior. 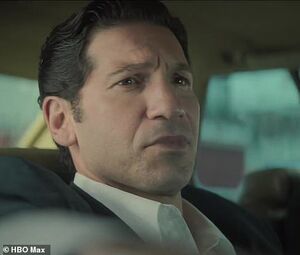 Jon Bernthal as Johnny Boy in the upcoming film, The Many Saints of Newark.