Second-in-command of the 3rd Street Saints

Right hand man of The Boss

Assist the Saints in their takeover of Stilwater (Saints Row).

Johnny Gat is the deuteragonist of the Saints Row videogame series. He is the best friend (and later right-hand man) of the Boss of the 3rd Street Saints. In the Saints Row IV standalone expansion pack Saints Row: Gat out of Hell Johnny is a playable protagonist alongside Kinzie.

He is voiced by Daniel Dae Kim.

Johnny Gat was an inhabitant of the Saint's Row District of Stilwater. Realizing that the district was being torn apart by gang wars, he volunteered to join the 3rd Street Saints, a gang aiming to end these wars. Gat was assigned to plot the downfall of the Vice Kings, one of the warring gangs in Stilwater. In doing so, he was aided by The Protagonist.

Gat's 'head on' strategies typically involved massive amounts of bloodshed and extensive property damage. After introducing The Protagonist to Gat's girlfriend Aisha, the three plot out a way to strike at the Vice Kings. They loaded up a car full of C4 and took it to the gang's Recording studio, blowing it up and leveling the place to the ground. Despite all this, Gat admitted to having an admiration for Benjamin King, the Vice King's leader. Although having been shot in the leg by Anthony Green, Johnny managed to move on along with The Protagonist on successfully destroying the Vice Kings. Johnny later hands Aisha a bouquet of flowers, reconciling their relationship during Julius' conversation to The Protagonist.

Following the destruction of all three gangs and the assassination of Marshall Winslow, Johnny Gat takes part in the assassination attempt against the Chief of police Monroe, resulting in the police leader's death. After that, Johnny is seen spending time with Aisha, as she was seen sitting on Gat's bed while he was still asleep, presumably they spent the night together.

After The Protagonist fell into a coma, Gat attempted to kill Troy Bradshaw for betraying the Saints. However, he failed and was taken to prison, in which he stayed for 2 years and 31 days. He was going to be executed for 387 counts of murder, but in his appeal trial, The Protagonist burst into the court room, killed the guards, and rescued Gat. Gat proceeded to help The Protagonist as second-in-command to resurrect the Saints, finding them a suitable new hideout[ and canonizing new members into the Saints. After the Saints' resurrection, Johnny helped in taking down the Ronin, one of the new gangs that took over. Gat participated in the raid on Poseidon's palace and killed a Ronin who was on Saints turf. However, this proved to be a fatal mistake as Ronin lieutenant Jyunichi saw Johnny dispose of the body.

When Gat left the house, Jyunichi and a crew of Ronin broke in and captured Aisha. Gat and The Protagonist were heading back home and Gat knew something was up as he noticed the door was ajar. The Ronin prepared to ambush them but Aisha shouted a warning to Johnny. In turn, Jyunichi decapitated her, infuriating Gat. As a result, Gat got into a sword fight with Jyunichi while The Protagonist killed the other Ronin. Jyunichi and Gat appeared to be on even levels, but when The Protagonist distracted Johnny for a minute in an attempt to shoot Jyunichi, the Ronin stabbed him. The Protagonist managed to get him to hospital since the ambulance was taking too long.

Gat stayed in the hospital for a while up until the Ronin invaded to finish him off, but The Protagonist got Gat away safely. Then the Ronin Leader Shogo Akuji arrived at Aisha's funeral and attempted to kill them in revenge for humiliating him and decimating his gang. Gat survived and, blaming Shogo for ordering Aisha's death, brutally beat him, and buried him alive. Gat proceeded on to defend the Saints Hideout from a Ronin invasion and killed many Ronin at Mr. Wong's heritage festival.

After the Ronin are defeated, Gat is available as a homie. After the gangs have been obliterated, the Saints, along with Gat, moved on to take down the corrupt company of Ultor, in defense and retaliation against the new Masako strike team threat. In an assassination attempt against Dane Vogel, Johnny used a sniper rifle to shoot at the surrounding guards while The Protagonist planned to personally murder Vogel, although Johnny was spotted by a security guard. When Vogel escaped to his office atop the enormous Ultor tower, Gat stayed below at the entrance, buying The Protagonist time. After Vogel had been killed, Johnny Gat did what he says he loves to do: shooting at oncoming waves of cops.

Shaundi, The Protagonist, Josh Birk and Johnny attempt to rob a bank as a publicity stunt. After they encounter heavy resistance from unknown men and women dressed in red, they begin to question who owns the bank. After Birk sets off the silent alarm and flees, SWAT storm the bank, and the Saints are arrested after a large-scale shootout. When The Protagonist is brought to Shaundi and Gat's cell, Johnny expresses disappointment over what the Saints have become, saying there's much more to the Saints name than "body spray and ass-tasting energy drinks".

Two high-ranking members of an organization called The Syndicate, Viola and Kiki, take the Saints aboard a plane owned by the Syndicate to meet with Phillipe Loren. After a heated discussion, Johnny breaks out of his chair and bashes Loren's head into a plane window, decompressing it; he then says he'll hold off the gang members and commandeer the plane while The Protagonist and Shaundi make their escape.

Before The Protagonist and Shaundi are about to jump out of the plane, they attempt to contact Gat on the intercom. He says "Right on, I'll see you in Stil-", before being cut off by the sound of automatic gunfire.

The Protagonist discovered that Johnny may be alive after Zinyak flooded Simulation 31 with past enemy gangs such as Vice Kings, The Ronin and Morningstar, which Kinzie discovers from Shaundi that they fit the profile of Johnny.

Later, The Protagonist enters into Johnny Gat's mind, where he has to relive the death of Aisha in the style of a 2-D sidescroller game. Aisha is kidnapped by Warren Williams and both Johnny and The Protagonist head to Kingdom Come Records to fight Warren. They head to Aisha's house to face off with Jyunichi. During this time The Protagonist tries to talk Johnny round, but he refuses to listen. After defeating Jyunichi, Johnny is freed from his container. Zinyak sends his Zin army to track down Johnny. The Protagonist manages to catch up with Johnny, who stabs a Zin soldier that is wearing his sunglasses in the back of the head with a knife, before putting the sunglasses back on.

After his rescue, The Protagonist can partake in a Genki Arena created by Matt Miller with Johnny, and they catch up on what has been happening. After finishing the arena and killing a recreated Phillipe Loren, Johnny becomes a super homie after getting superpowers.

Johnny begins helping the Saints on their quest for taking down the Zin and going after Zinyak. When meeting in Simulation 31 where they end up being ambushed, Johnny teams up with The Protagonist, Kinzie, Shaundi and Fun Shaundi to fight through the Zin invaders.

Johnny along with the Saints come to The Protagonist's aid during their stand-off, and eventual defeat of Zinyak.

When The Protagonist is kidnapped by Satan, Johnny along with Kinzie travel to the city of New Hades located in Hell to help rescue him.

There are multiple endings that Johnny can choose after defeating Satan.

Ending 2: Johnny becomes the new king of Hell. When asked by Dane Vogel if he misses his friends, Johnny replies that he doesn't as they would be joining him soon anyway.

Ending 3: Johnny and Kinzie find a new homeworld for humanity to live on (after losing earth in Saints Row IV). However this new world is homed to a very hostile race, but Johnny takes pleasure in the prospect of a new battle.

Ending 4: Johnny asks God to bring back the earth, but at the expense of retconning the whole world of Saints Row. In this new world Gat appears as a cop on his way to an interrogation of a prisoner.

Ending 5: Johnny learns about the secrets of the universe from God. 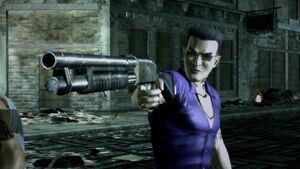 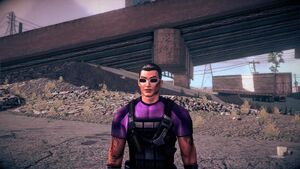 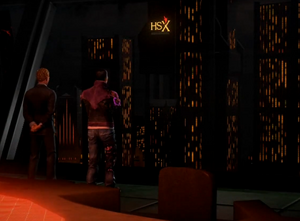 Some information here is derived from the Saints Row Wiki article "Johnny Gat", licensed under CC-BY-SA.