Johnny was the vice president of the biker gang. The Lost MC. Is a friend of Niko Bellic. He first meet him at the sale at the apartment in the mission "Buyer's Market". But during the mission "Collector's Item" he stole his money because The Lost needed it. But Niko did not kill him at all. He was also best friend of Jim Fitzgerald. They do work together. But in the final cutscene of the mission "Was It Worth It?". Johnny had an emotional day after he killed all of Ray's goons. Johnny's girlfriend Ashley Butler tells him that Jim is dead. In the final mission "Get Lost," Johnny Klebitz, Terry Thorpe, and Clay Simons break into a prison and kills all the serurity guard's. And after Johnny finally kills Billy Grey. He killed him for trying to turn against Johnny and the brothers. After all 3 escaped from the prison, they discover that their clubhouse was burned down. After that, the Lost MC moves to Brian Jeremy's safehouse.

By 2013, the events of Grand Theft Auto V, Johnny and the remaining members of The Lost moved to Sandy Shores, Blaine County, where he was brutally murdered by Trevor Phillips in a confrontation. Trevor was having sex with Johnny's girlfriend Ashley in his trailer and Johnny was accidently told by Trevor's assistant Ron. Johnny goes to Trevor's place to confront him about it however Trevor ignores him and walks away. Wade, Ron, and Ashley tries try to get Johnny to leave however he curses off Trevor instead. Trevor creeps him out and 'Johnny apologizes however Trevor smashes a bottle in his face and stomps on his head until he dies. Ashley is seen mourning the loss of her boyfriend, and Johnny dies a very gruesome death at the hands of Trevor.

Johnny became a criminal because he beleived in fighting for his loved ones, even if it ment to kill. When Johnny was 10, his brother Michael introduced him to Billy Grey, the true antagonist of the game. Johnny and Billy became good friends, but Billy was not a good role model for Johnny, since Billy is the one who got Johnny into crime. Johnny and Billy also became friends with Jim Fitzgerald, who was already a member of The Lost MC. As the 3 became best friends, they also became criminals. Johnny joined The Lost MC due to his hatred towards corrupt police officers. 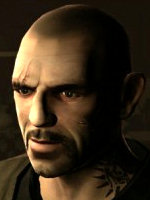 Johnny Klebitz in the original Grand Theft Auto IV.
Add a photo to this gallery

Retrieved from "https://villains.fandom.com/wiki/Johnny_Klebitz?oldid=1098929"
Community content is available under CC-BY-SA unless otherwise noted.