Being a fan of Japanese culture and ninjas.

Johnny Maxima is the CEO of the video game company Machina Vision and the main antagonist of the 2017 film Kamen Rider Ex-Aid: True Ending.

He was portrayed by Brother Tom.

Johnny Maxima and Masamune Dan agreed on a business deal for Machina Vision to collaborate with Genm Corp. for Kamen Rider Chronicle's worldwide release in exchange for being given a single Gamer Driver. However, after Masamune discovered that Johnny was focusing on developing his own game instead of pushing for the worldwide release of Kamen Rider Chronicle, he refused to hand over the Gamer Driver, marking the end of their deal and leaves.

After being rejected by Masamune Dan, Johnny Maxima hacked Genm Corp.'s servers to obtain schematics for the Gamer Driver.

Johnny Maxima had Kagenari Nagumo as the ninja-like Kamen Rider Fuma start a new Bugster virus epidemic in order to find players for Machina Vision's new game Hurricane Ninja. When Nagumo selected an ill girl named Madoka Hoshi (who was secretly his own daughter) as a player, Maxima questioned his choice but Nagumo assured him she would be perfect for the experiment.

In the virtual reality, Johnny absorbs the three Gashatrophies Madoka created and congratulates her furthering his schemes. Madoka asks who he is to which Johnny proclaims himself the ultimate final boss. he then goes to confront the Doctor Riders as they are facing Kamen Rider Fuma. He tells them that Madoka is saved, crediting Kagenari on his theory before declaring he will become god who will end the world and transforming into a red and gold variant of Gamedeus called Gamedeus Machina. With his immense powers, Gamedeus Machina is able to easily overpower the Riders, but does not finish them off as he views them as no longer a threat.

After Kamen Riders Snipe and Lazer defeat Kamen Rider Fuma, Gamedeus Machina appears to confront them again. He initially overpowers the two until Kamen Rider Brave arrives and restores them to full health. Despite this, Gamedeus is still able to maintain his advantage and manages to defeat them and force Brave and Snipe out of their transformations. Evolving to his second form, Gamedeus Machina pushes out Kuroto Dan and Parado from his body, having used them to speed up his regeneration. He then attempts to trap the city in a Game Area bubble, but Emu Hojo shows up and transforms into Kamen Rider Ex-Aid Muteki Gamer to fight him. After Ex-Aid pushes Gamedeus Machina back with the Gashacon Key Slasher, Gamedeus attempts to crush him but fails thanks to Emu using the Invincibility mode of Muteki Gamer. Emu declares that he will change Madoka's fate but Gamedeus proclaims that fate is a myth and all humans will die. Ex-Aid responds by telling him that humanity's will and desire to live is more powerful than fate before charging at Gamedeus Machina and finishing him off with a Hyper Critical Rider Sparkling Kick. 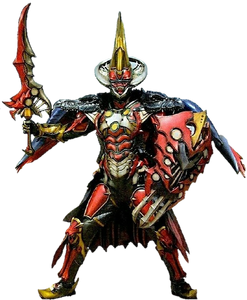 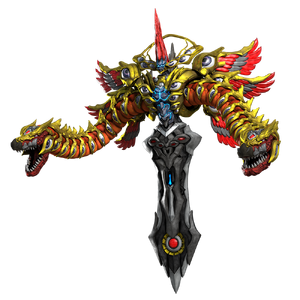