Killing women and removing their skin.

Continue his father's legacy and seek vengeance on his mother for abandoning him.

Johnny Morgan is a major antagonist in American Horror Story: Asylum. He is the son of Lana Winters and Dr. Oliver Thredson, the original Bloody Face. In 2012, he became the second Bloody Face and the final antagonist of the season.

He is portrayed by Dylan McDermott.

Johnny spent time in foster homes in his life. Johnny held an aggressive grudge against his mother for reasons due to her abandoning him, killing his father and refusing to suckle him (the last reason rather baseless as Lana did breastfeed him when he was an infant). His grudge towards his mother stemmed from an unresolved Oedipus Complex as she neglected his emotional childhood needs, and this spilled into his personal life as he hired prostitutes to breastfeed him during sexual intercourse. He also kidnapped women and skinned them while they were still alive.

Whilst in foster care, he learns if his father's background from the Internet. Johnny inherited from his father's sociopathic tendencies when he began torturing dead animals as a child and he was arrested many times for armed robbery. Johnny becomes a serial killer of victims and managed to track his mother down where he was shot to death by her. 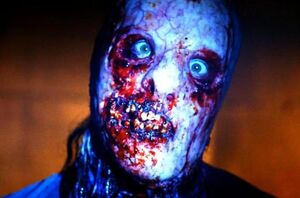 Johnny as the Bloody Face

Retrieved from "https://villains.fandom.com/wiki/Johnny_Morgan?oldid=3761953"
Community content is available under CC-BY-SA unless otherwise noted.