Johnny Quick is a member of the Crime Syndicate and the evil counterpart of the Flash from Earth-3.

Johnny Quick was born into the partially "reversed" universe of Earth-Three. Most of the Earth-Three Johnny Quick's history is unrevealed. What is known is that the person who would assume the identity of Johnny Quick is that he was born with an enhanced speed and later found a helmet that allowed him to focus his considerable speed into far greater levels. With the extra speed granted by the use of the helmet and adopting the name of "Johnny Quick" he began his life long career of criminal conquest. It would be during his attacks that he joined in the loose partnership with the other four super-powered beings on Earth-Three and founded the organization known as the Crime Syndicate of America.

It would be after largely conquering most of their world that Johnny Quick and his fellow Crime Syndicate members challenged the combined forces of the Earth-One Justice League of America and Earth-Two Justice Society of America. Not able to withstand the combined mights of two Earths greatest superbeings, the Crime Syndicate was defeated and imprisoned in an extradimensional bubble created by the Earth-One Green Lantern.

After their defeat by the combined forces of the Justice League and Justice Society, Johnny Quick would remain imprisoned between dimensions until Captain Comet and the Secret Society of Super-Villains passed through the dimensions and accidentally freed him along with Power Ring and Super-Woman. It was during this battle that the secret of Quick's helmet was revealed as a focusing tool which allowed the Society of Super Villains to continue their journey through the dimensional voids. Quick had fashioned a secondary helmet from other elements but was greatly reduced in his speed levels with the secondary helmet. Quick recovered his primary helmet during the resulting battle with Comet and the Super-Villains.

This basic stalemate of almost endless escape and imprisonment would continue until the antimatter wave attack of the Anti-Monitor came to Earth-Three during the Crisis on Infinite Earths. Unable to stop the antimatter wave that was destroying Earth-Three, Johnny Quick and the other members of the Crime Syndicate teamed up with Luthor, Sr. in an attempt to stop the attack. Seeing that the far more powerful members of the Crime Syndicate were destroyed, Quick tried to outrun the anti-matter wave in an attempt to break the light speed barrier and escape the anti-matter wave into another dimension. As shown before against Barry Allen, Quick's top speed was not able to achieve that level and he was killed when the anti-matter wave totally destroyed the entire planet Quick was on.

He along with everyone else native to their dimension died in the attack and were completely erased from all history with the reset of the single surviving universe, except for Superman of Earth-Two and Alexander Luthor, Jr. who remembered this Johnny Quick and his native world.

Most of the Qward Johnny Quick history is unrevealed. What is known is that the person who would assume the identity of Johnny Quick is that he was a dangerous drug addict who happened to encounter an unspecified speedster and later killed him.

It has been speculated by some that the unspecified speedster who Quick killed was the previous Johnny Quick, a Thunderer who was also native to the universe of Qward. But this other speedster has not been specifically identified by the current Quick.

The current Quick was able to process that unknown speedster's blood into a synthetic chemical called "Speed Juice" which allows him to attain a certain degree of superspeed. However his speed while fast seems to be based on his physicality which explains the reason why he is slowly deteriorating from constant use of the drug. He was recently beaten by Owlman who slipped a inhibitive chemical compound into Quick's "Speed Juice" which resulted in Quick having a small heart attack. It is unknown if this heart attack has impacted on his speed and other abilities.

Much liked his Pre-Crisis Earth-Three counterpart, Johnny Quick is a villain counterpart of the New Earth and Earth-2 Flashes and a member of the Crime Society. Johnny and his Society cohorts encountered the Challengers from Beyond and fought them on sight. After the Challengers were aided by the Jokester and escaped to another reality, Johnny and the Crime Society were offered by Monarch to join in his war against the Monitors and pursuit of Multiversal conquest. For some reason, Johnny Quick was instead drafted into Monarch's Arena battles in his search for a strike team compose with a Flash, in which he had Johnny pitted against Jason "Jay" Garrick (Earth-2) and Lia Nelson (Earth-9), in which he eventually won. Since the destruction of Earth-51, Johnny Quick's fate remains unknown.

Johnny Allen was a high-profile criminal, on the run with his equally criminal girlfriend, Atomica. Cornered on the roof of Central City STAR Labs, Allen was struck by a bolt of lightning which shattered the roof. The duo fell in the labspace below, with Allen landing amid the chemicals. Something in this incident granted him super-speed, and he went on to become a super-criminal alongside his girlfriend who had been empowered also. They also became very sadistic.

"Johnny Quick", as he now called himself, ran through Central City, answering to no-one... until the Day the White House burned. Around the time of Darkseid incursion onto Prime Earth, the being that had destroyed Ultraman's Krypton came to Earth, and an alliance of super-criminals formed to find a way to safety.

Little is known of Johhny Quick's activites since then, until Alfred Pennyworth, who had managed to come through, engineered an escape for them.

Johnny Quick was one of the six founding members of the Crime Syndicate who terrorized the Earth they inhabited, keeping its governments in near submission by threat of a nuclear war. He was one of the members who favored the use and development of a quantum-powered nuclear weapon that would destroy all life on Earth if the Earth governments refused to relinquish what little power they had left to the Crime Syndicate. However, when Owlman stole the weapon and transported it to a parallel Earth universe called Earth-Prime to destroy all realities, Johnny Quick helped Lex Luthor and the Justice League stop Owlman by vibrating his molecules to a fast enough speed in order to open a rift between the Crime Syndicate Earth and Earth-Prime. Upon Batman's return from Earth-Prime, though, the incredible amount of molecule vibration speed had aged Johnny Quick to the point of death- he bravely sacrificed himself to save the world he had terrorized. Now knowing Batman knew this would happen, which is why he asked Quick to do it instead of Flash, All Quick did was smile and congratulate him on tricking him. 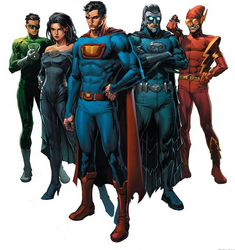 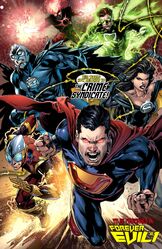 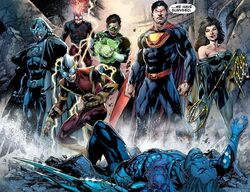 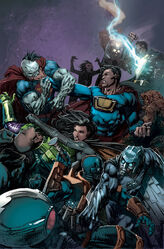 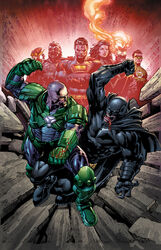 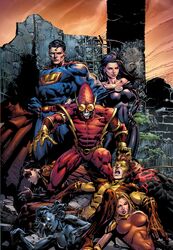 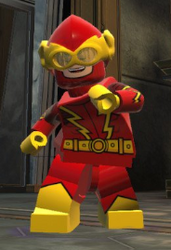 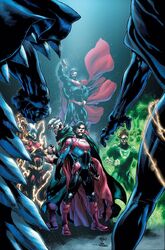 Retrieved from "https://villains.fandom.com/wiki/Johnny_Quick?oldid=3971435"
Community content is available under CC-BY-SA unless otherwise noted.