Using his dark powers that he got from Larry

Defeat the Teen Titans in his alliance with the Brotherhood of Evil (both failed).

Johnny Rancid is a recurring antagonist in the Teen Titans television show.

Johnny Rancid was nothing but a common thief, but he is one of the few villains who got away from Robin. It is possible that he is a mutant because his skin color is grey. Even though he might be a mutant he never shows his powers. At one point he had the power to warp reality, but he lost his powers. He even created a mechanical dog named Wrex, and then created an upgraded version called Wrexzilla. He has a habit of calling Robin "Little Bird" and the Titans "Stupid Little Kids". He was voiced by Henry Rollins, who also played Zaheer.

Johnny Rancid was originally a normal punk, though he possessed considerable skills in motorcycling and sharpshooting, as well as enough mechanical and electronics-based training to construct his own (albeit crude) combat robots. After gaining vast supernatural powers from the rift in reality created by physical damage to Larry's “magic finger”, Rancid gained several enhanced weapons and powers. His bike was modified to run even through the air and across water on a fiery trail, at speeds which even surpassed the super speedsters Más y Menos. His energy blasters were likewise enhanced in potency. Any reality-warping powers he would have been able to utilize were shown in an extremely limited fashion, such as an energy grip with which he attacked Robin and energy restraints from the sky for Starfire. 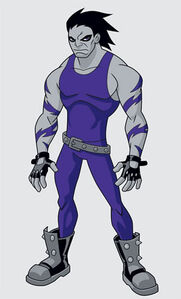 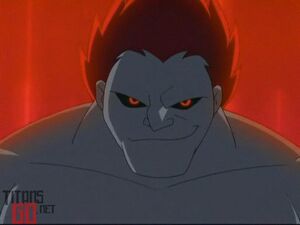 Johnny Rancid in his empowered form.