Second-in-command of the Cowboys (formerly)

Leader of the Cowboys

John Peters "Johnny" Ringo is the secondary antagonist of the 1993 film Tombstone. He is a fictionalized version of the real Johnny Ringo.

He was portrayed by Michael Biehn, who also played Henry Gates in Clockstoppers.

Just as Wyatt Earp and his brothers, Morgan and Virgil, begin to benefit from a stake in a gambling emporium and saloon, they have their first encounter with a band of outlaws called the Cowboys. Led by "Curly Bill" Brocius, the Cowboys are identifiable by the red sashes worn around their waist. Conflict is narrowly avoided upon Wyatt's insistence that he is retired and no longer interested in a career enforcing the law. This is also the first face-to-face meeting for Holliday and Johnny Ringo, who take an immediate dislike to one another.

Virgil, unable to tolerate lawlessness, becomes the new marshal and imposes a weapons ban within the city limits. This leads to the legendary gunfight at the O.K. Corral, in which Billy Clanton, Frank McLaury, and Tom McLaury are killed, Virgil and Morgan are wounded, and the allegiance of county sheriff Johnny Behan to the Cowboys is made clear. As retribution for the Cowboy deaths, Wyatt's brothers are ambushed: Morgan is killed, while Virgil is maimed.

During Wyatt Earp's vengeance upon the Cowboys, Curly Bill is killed by Wyatt, making Johnny the new leader of The Cowboys. Ringo sends a messenger (dragging McMaster's corpse) to the ranch telling Wyatt that he wants a showdown to end the hostilities and Wyatt agrees. Doc knows he is a better match for Ringo, but is in no condition for a gunfight. Wyatt sets out for the showdown, not knowing that Doc has already beat him to the scene. Doc surprises Ringo, and says they are now finishing their previous challenge "to play for blood". Doc fires the first shot, hitting and killing Ringo when Ringo's nerves slow his draw.

In the film, he is at first the second in command of The Cowboys. He is characterized as a violent sociopath who aspires to humiliate and destroy Doc Holliday. He is also characterized as highly educated, at one point trading Latin taunts with Holliday.

Holliday describes Ringo as having "a great big hole in the middle of him, and he can never kill enough, or steal enough, or inflict enough pain to ever fill it". He then says that Ringo wants revenge "for being born". 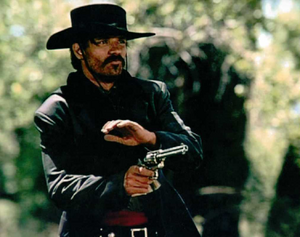