The Fast and the Furious

Squaring up to Dom Toretto.

He is the leader of an opposing race crew to Dominic Toretto and a member of the criminal underworld. After he's been involved in many reported highway truck robberies, Johnny eventually becomes the primary target of an investigation by Brian O'Conner.

He was portrayed by Rick Yune, who also played Zao in Die Another Day and Kang Yeonsak in Olympus Has Fallen.

Prior to the events of the film, Tran estabished a business partnership with Dominic "Dom" Toretto, however their partnership ended when a business deal went sour and also because Tran discovered that Dom slept with his sister. After that, the two made an agreement to stay out from each other's territories.

However, one night he and his gang found Brian O'Conner and Dom in his territory, and escorted them to a parking lot, where he talks to Dom and remarks about Brian's car. They leave shortly after, only to return and shoot the car with their submachine guns, destroying it and not knowing it is owned by the LAPD and FBI. Later as Dom, Brian and Vince spy on Tran at his garage, he is seen again with his cousin Lance interrogating a man by the name Ted Gassner, regarding the engines in his vehicles, which is also where Brian spots several boxes of DVD players in his garage (the same kind being robbed in the film from truckers). This would lead Brian to organize a large SWAT assault team to invade Tran's house, only to find a few minor weapon possession charges and other minor issues, although he was slapped by his father for the shame and disgrace of being arrested and need to pay the car that he destroyed.

After being bailed out, Tran is later seen at the race wars, racing Jesse for pink slips. Brian warns Jesse about Tran's Honda S2000 having over $100,000 worth of upgrades under the hood of his vehicle, but Jesse ignores him and races anyway - though Tran ends up winning.

Shortly after his victory, Tran confronted Dom and accused him of the SWAT team invasion on his home, saying it was an act of disrespect towards his family for being narc'd out by someone (unaware that the man responsible, Brian O'Conner, was right there in front of him). This enrages Dom, who responds by knocking Tran to the ground before repeatedly punching him until Vince separates him - though not after Dom blurts out to Tran that he "never narc'd on nobody!"

Tran and his cousin Lance later pull a drive-by shooting at Dom's house, narrowly missing everyone except Jesse, who was killed in the process. Dom and Brian later chase after the two, leading to Dom knocking Lance off his bike while Brian continues to pursue Tran on his own. The pair exchange gunfire, though Brian manages to shoot Tran - causing his bike to slide and hit against a wall, killing Tran. 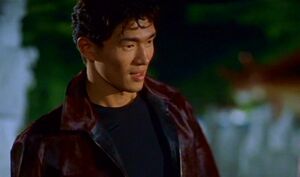 Johnny Tran being slapped by his father in disrespect for bringing shame and disgrace to Tran's family.

Tran and his men torturing Ted Gassner in his Garage. 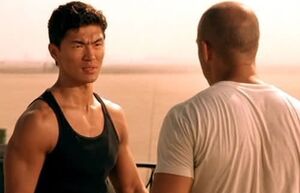 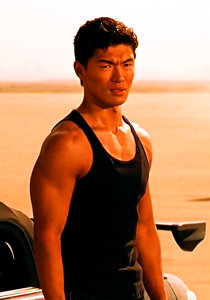