Villains Wiki
Register
Don't have an account?
Sign In
Advertisement
in: Criminals, Partners in Crime, Burglars,
and 15 more

Criminals
Johnny and Marge Stevens are the antagonists of the 12th episode of Joe Camp's 1983 short-lived TV series Benji, Zax & the Alien Prince.

They are first seen when they ask R. J. Jenkins for Benji. While Willard gets Benji, Johnny secretly unlocks the window and they leave with Benji.

After R. J. Jenkins leaves Prince Yubi and Zax to do shores, the pair sneak into the window and steal a cookie jar full of $500. When Jenkins returns surprised to see that he has been robbed, he believes that Prince Yubi and tries to call the police until Zax tells him about the people who took Benji. When the pair hear a report by the police about them on the radio, Marge hides Benji in the front seat. However, the door wasn't strong enough to hold him and Benji escapes. When Benji takes Yubi, Zax and Jenkins to their location, Johnny disguises himself as a lady. Benji tears off his disguise and the pair are arrested. 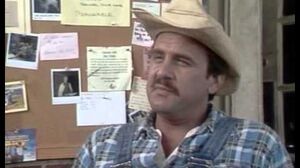