Putting obstacles in her guests' way

Hanging out with her friends

"Play" with Mario and Luigi.

Jojora is a character who debuted in Mario & Luigi: Superstar Saga. Her last appearance is in the 3DS remake.

While little is known about her personality since she does not appear much, Jojora can be a fierce opponent in battle. She also cares for her friends, expressing anger if their well-being is threatened ("You NEVER touch a lady without her permission!") and crying upon their defeat.

Jojora appears to live at Joke's End, a cold place where bad jokes go to die. According to Jojora, the location was once guarded by an ancient spirit whose descendant has a cousin that she is friends with. She makes her first appearance at the gate of Joke's End and puts many obstacles in Mario and Luigi's way to exchange the fake Beanstar and save Princess Peach from Bowletta and Fawful. Near to the top of Joke's End, the Mario Bros. will find Jojora again, who will ask them to sit down while and rest. Jojora tells them how she admires their perseverance and will ask the two brothers which of her friends they would like to meet for tea. The player can choose different names but the friend will be the same: a giant snowball-like creature who then joins Jojora to fight against Mario and Luigi. However, the Mario Bros. manage to defeat them both which infuriates Jojora, and she calls pair uncool jerks before leaving them to continue on their adventure.

Jojora is very tough in battle. She has such a high defense that a hit from either Mario and Luigi will only cause one damage to her unless their POW is high enough. She can also freeze the Bros. using her wand and create a snowstorm when one of them attacks her friends, and also has the power to restore her stamina as well as that of her friends as well. Despite this, she can be easily hit with the Hammer when she walks to one of the Mario Bros. which will make her cry and leave the battle, at this point, Mario and Luigi deal with Jojora's friends without problem. However, she will come back to the battle in a short time.

Whether Jojora herself survives does not impact the outcome of the battle. 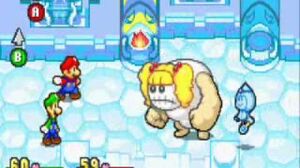