Joka is the main antagonist of The Lion King: Six New Adventures book "A Snake in the Grass".

Joka is a large purple snake who tries to eat Timon. But due to Timon always being around his friends Pumbaa and Simba, Joka decided that in order to get at Timon, he must separate him from his friends.

Joka goes to each of the trio separately and tells them that their friends have said things about them. This plan succeeds and results in the trio splitting up. Joka eventually gets Timon alone and hypnotizes him, but the meerkat is able to break out of this.

Simba and Pumbaa come to their friend's aid, but ends with Joka freeing Timon and starting to strangle Pumbaa. Luckily, Simba defeats the snake by throwing him into a river.

Joka is known for being sly, crafty, cunning, deceitful, and manipulative. He is extremely intelligent, knowledgeable, and quick-witted, so he is able to formulate complicated plans in a short amount of time. He has the power to twist his words into whatever he rightly wants and uses hypnotism to lure unsuspecting victims into believing his empty words.

Joka is a massive, long-bodied snake. He has purple scales, dark purple stripes, and a pinkish underbelly. His eyes are normally teal, but change to an assortment of colors when he uses hypnosis. 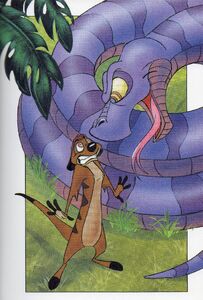 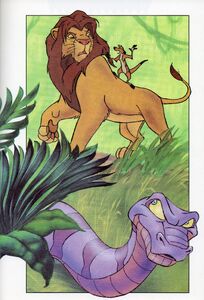 Joka following Simba and Timon.
Add a photo to this gallery

Retrieved from "https://villains.fandom.com/wiki/Joka?oldid=3465696"
Community content is available under CC-BY-SA unless otherwise noted.