Murderous Evil Clowns
The Joker's Gang is a large group of villainous thugs who work for the Joker as well as his henchwomen and right hand, Harley Quinn. They are generally made up of insane and very violent and sick criminals themselves, the Joker has brutal initiation standards, forcing them to survive his death traps or murder members of there own family before they are allowed to be part of his gang. People who associated with them was Victor Zsasz, Bane, Clayface  and Poison Ivy before she turned against the Clown Prince of Crime. They were ruthless criminals who feared and hated Batman; wanting him dead the second they catch sight of him. In both locations, they managed to control locations as well as get into the Armory. Scarecrow also was possibly associated with this gang too. Frank Boles was a hired mercenary who worked for Joker until he was killed by him when he discovered Batman wasn't far behind. The Joker regularly mistreats his follows, sometimes simply killing them for entertainment, however they are fiercely loyal to him.

When Batman confronts or encounters them, he will battle them and aggressively defeat them; temporarily stop them from breathing and breaking their bones. They often wear make up to make them look like clowns as well as colorful outfits in Arkham City. In Arkham Asylum, some were killed by the Joker himself when Laughing Gas was released and later when testing bombs. During the events of Arkham City, the gang were engaged in a brutal gang war against the gangs led by the Penguin and Two-Face, some thugs also secretly worked for the Riddler and had managed to infiltrate the Joker's gang, they were interrogated by the Dark Knight for information about him.

Following the Joker's death many of them stayed on and accepted Harley Quinn as there new leader. While others fled and joined other gangs.

After a fire began in Blackgate Prison, Joker's men were moved to Arkham Asylum as their new prisoners under the survelliance of Warden Quincy Sharp and new Security. Joker surrendered and Batman brought him to the asylum, although the Dark Knight followed to see what the clown's up to.

The thugs who work for Joker soon broke out and began running free; killing guards and doctors in their path. They eventually got Shotguns, Assault Rifles and Sniper Rifles from the Armory and even took some staff at the asylum hostage. Batman defeated the majority of the thugs who helped in Joker's take over.

After Batman defeated the TITAN-mutated Joker, Security Guards restored the asylum as well as recaptured Joker and his gang members.

Joker, Harley Quinn and their gang members were captured by Hugo Strange's TYGER Guards and brought to Arkham City. In the imprisoning city, Strange gave both Joker's gang and Penguin's gang military equipment including weaponry and took control of the Steel Mill.

The thugs went to war with Two-Face and the Penguin on the streets, as well as fighting Batman several times but were knocked out. Batman only encountered one of Joker's thugs injected with TITAN. The thugs also temporarily controlled the Church until Aaron Cash and other innocent people took control of it.

Towards the end towards their gang leader's death, thugs rather accepted Quinn as their new leader or joined other gangs.

After Joker's death, Harley claimed her lover's crew and changed them with a new look and name. Harley´s Gang was under 100% rule by Harley and their main objective was to avenge Joker's death. Harley's Gang used colors like red and black, and, instead of green, they had diamonds in their clothes. Harley's Gang had a sad smile, their eyes had black paint around them, and Armored Henchmen had Harley's face on their helmets.

The gang took several GCPD officers hostage, and held them in either the Steel Mill, or in the Shipyard. The gang managed to trap Batman, but were defeated when Robin came after him.

It should be noted that following the Joker's death, the thugs had gained respect for Harley. They followed Harley's orders without question, and a few even voiced concern for her mental health.

It was rumored that Harley was reuniting the old gang to join Scarecrow. Their appearance didn't change much, but instead of Armored Henchmen, Harley had Brutes with her body in torpedo on the back of their coat and she had Minigunners. Their mission was to kidnap the new Jokers and to protect Harley. They only could be seen at Panessa Studios. Harley's Gang were the only crew to not appear at the GCPD Lockup. 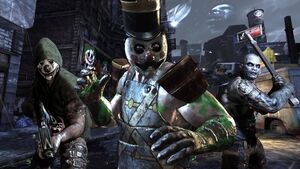 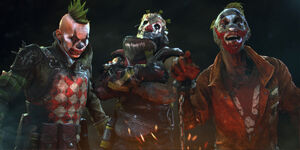 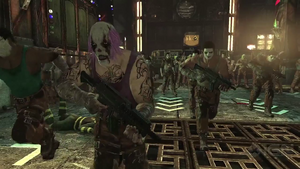 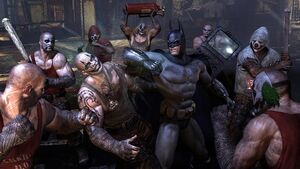 Batman Fighting Joker's Gang
Add a photo to this gallery

Retrieved from "https://villains.fandom.com/wiki/Joker%27s_Gang?oldid=3329091"
Community content is available under CC-BY-SA unless otherwise noted.