The Joker's Thugs are a group of organized violent criminals that work exclusively for the Joker. They serve him in many ways such as assassinations, armed robberies, kidnapping, torture, and as his enforcers that go up against the Gotham City Police and Batman himself. Many of his men work for him for numerous reasons including fear, greed, or simple insanity. They serve as the main antagonistic faction of the 2008 Christopher Nolan film, The Dark Knight.

Dopey - One of the five criminals hired by Joker to rob Gotham National. Dopey zip lined to the roof of Gotham national along with fellow Robber Happy, soon after their three accomplices stormed the bank's lobby. Dopey, serving as the group's alarm expert, proceeded to disable the alarm system and cutting off the distress signal that was sent by the bank's manager. Dopey noticed the signal went to a private number, indicating a mob-owned bank. However, after completing his job of disarming the alarms, he was promptly shot in the back with a suppressed pistol, and killed by his partner Happy, becoming the first victim of the Joker's double-cross plan.

Happy - One of the five criminals hired by the Joker to rob Gotham National. Happy, along with Dopey used a cable gun to zip line from an adjacent building to the bank's rooftop. Once there, Happy watched as Dopey disabled the alarm system, before murdering him in order to eliminate his cut of the money. Acting as the group's vault cracker, he immediately headed for the bank's vault and began to disable it's locks, shocking himself in the process. Eventually Happy broke through all vault locks and, with his shoes covering his hands this time, opened the vault door. After completing his task he was visited by Grumpy, where he then related his murder of Dopey to him, much to Happy's horror Grumpy revealed he was given similar orders regarding him. Happy attempted to plead for his life but was quickly gunned down by Grumpy in the bank's vault. Happy's body is later seen still in the vault when the police investigate the scene.

Happy's weapon used for the robbery and murder of Dopey was a silenced Beretta 92SB-C.

Chuckles - One of the five criminals hired by the Joker to rob Gotham National. Chuckles rode in the station wagon driven by Grumpy to the bank, picking up Bozo along the way. While en route Chuckles informs Grumpy that the man that hired them for the job is getting a share of the robbery take even though he is sitting out on the actual robbery. The three men then storm the bank lobby, with Chuckles firing his gun in the air to get everyone's attention before subduing all the security guards. However just as Chuckles is incapacitating the last guard he is suddenly shot in the back and killed by the bank manager using a concealed shotgun.

Chuckles weapon used during the robbery was a Mac-10, using it to fire into the air and club the security guards.

The Joker's Thugs were a group of criminals, in part a combination of small-time bank robbers, gang members and mentally-ill escapees of Arkham Asylum, who served under the Joker.

Five small-time criminals served under the Joker in the robbery of Gotham National Bank, four of which were methodically or accidentally killed off in the heist. The Joker himself posed as one of his thugs, going by the call-sign Bozo. Going by one of the people involved, Grumpy's response about splitting it up into six shares instead of five, the heist wasn't the first time where Joker disguised himself as one of his own thugs when they participated in a crime of some sort.

The Joker employed three bounty hunters to bring him to Gambol, pretending to have been killed by them, and lying lifeless in a bag. The Joker then viciously murdered Gambol. With Gambol's men on the floor, and the bounty hunters aiming handguns to their heads, the Joker informed Gambol's men that he had opened tryouts for his new gang. He snapped a pool cue in half and dropped one half on the floor, then ordered his enforcers to be quick, hinting that he intended for Gambol's men to fight to the death until the sole survivor joins Joker's team.

Another group of the Joker's thugs crashed a fundraiser for new D.A., Harvey Dent. Outside one of the Joker's thugs tried to ambush Bruce Wayne, but Wayne easily defeated him. Also, the thugs (including the Joker) fought Batman but made a speedy escape after throwing Rachel Dawes out of a shattered window. There were seven members of the Party Thugs.

Before Commissioner Loeb's funeral, the Joker and his thugs kidnapped some Honor Guards who were to be at the funeral and took their guns and uniforms to assassinate Mayor Garcia. They tied up the real Honor Guards in Melvin White's apartment. At the funeral, the Joker shot Lieutenant Gordon, who got in front of the Mayor. The Joker and his thugs escaped, while Thomas Schiff was shot in the leg and kidnapped by Harvey Dent. There are at least (including Thomas Schiff) 6 members.

Some of the Joker's thugs assisted the Joker in attacking an armored SWAT truck carrying Harvey Dent. They were all arrested after their semi-truck was flipped over by cords left by the Batpod. There are 3 thugs in his van (including Kilson) and The Joker's truck driver. There were also two thugs dressed as clowns on the fire-escape-stairs of some buildings in downtown Gotham taking down a police helicopter with cable guns, and one driving a garbage truck ramming some police cars.

The Chechen met the Joker on a Container Ship with his thugs and rottweilers. The Joker burned his half of an immense mound of US dollars, which happened to be holding the mobsters' half on top of it, and betrayed the Chechen by having his own men join the Joker, and possibly execute their former boss, also possibly involving cutting him up into tiny pieces and feeding them to his beloved rottweilers. There are only four thugs. 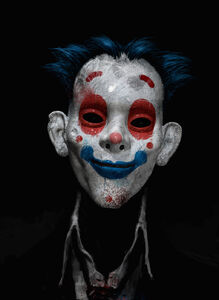 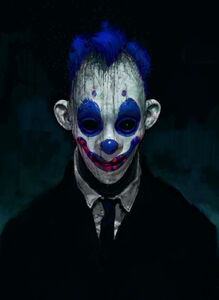 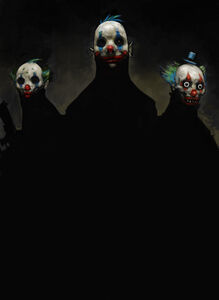 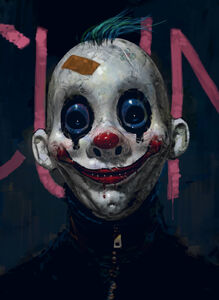 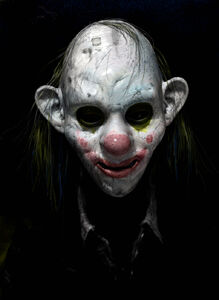 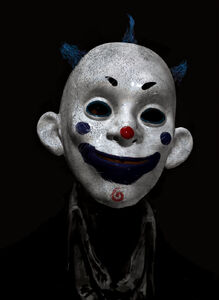 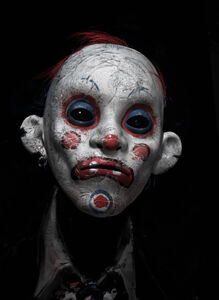 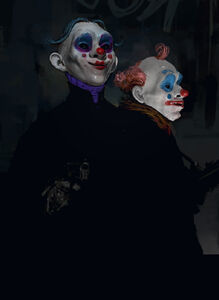