Make Johnny a member of his "family".

The Joker is the titular main antagonist of the 2008 graphic novel of the same name. He is a somewhat darker and more realistic depiction of the traditional Joker who is bent on reclaiming his criminal empire.

Jonny Frost, a low-level thug, is sent to Arkham Asylum to pick up the Joker. Joker immediately takes a liking to Frost, using him as a chauffeur. Frost drives the Joker to the lair of Killer Croc. The three go to the "Grin and Bare It" strip bar, which was formerly owned by the Joker. With the help of Harley Quinn, the Joker kills the new owner and asks the shocked audience if they are willing to help him take his city back.

Next morning, the Joker robs a bank and coaxes the Penguin (mockingly referred to as "Abner") to invest the stolen money. Joker then embarks on a killing spree, murdering many thugs who stole his money, turf, and bizarre sense of reputation. Informed by the Penguin that Two-Face, a crime boss with a split personality, is evading a talk with him, an enraged Joker trashes a phone, kills one of his own henchmen, and then sets the "Grin and Bare It" on fire.

The next day, Frost is detained by Dent, who warns him that Joker will kill him. Subsequently, Frost is late to the Joker's meeting with the Riddler, a disabled weapons dealer. They exchange a briefcase, and the Joker leaves. Once on the road, the Joker's crew is shot at by off-duty cops hired by Dent, and Frost saves the Joker's life in the scuffle.

Joker embarks on a turf war against Dent, prompting him to meet with Joker. They meet at the city zoo. Joker brings the briefcase he got from the Riddler. Joker says he has learned Dent has two wives, and threatens to use the contents of the briefcase as leverage against him. The meeting becomes hostile. Joker attacks Dent, with shards of broken glass glued to his fingertips. When Dent's men raise their guns, Harley (disguised as an ape in a cage) expertly shoots each one in the head.

After helping Frost get his ex-wife Shelly back from Dent, Joker rapes her. He says this makes them even, since Frost "cheated" on the Joker by not revealing his own meeting with Dent. Later, Harvey paints a bat on a spotlight, and pleads with Batman to stop Joker. When Joker and Frost return to their apartment, they find the window shattered and flee to Croc's lair. However, Batman has already subdued Croc and his gang.

In a final attempt to escape, Joker and Frost flee to a nearby bridge. While Joker is "screaming through tears", Jonny inexplicably finds himself laughing, unable to stop. They find Batman in wait, and Joker, being provoked by Batman's tauntings, shoots Frost in the chin. As Batman and Joker fight, a dying Frost laments on how the Joker is a disease as old as mankind, all while falling off the bridge to his death. It's presumed that the Joker was defeated by Batman afterwards and taken into custody for his actions.

In Batman: Damned - a 2019 sequel to the graphic novel Joker -, Joker and Batman are found to have been fatally injured during the clash on the bridge, plunging into the water below. However, when Batman dies of blood loss, Joker re-emerges from under the bridge, laughing manically (in a scene that mentions the genesis of the character in The Killing Joke). 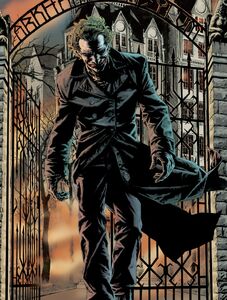 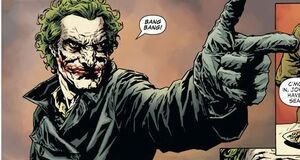 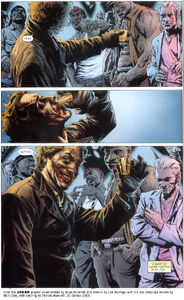 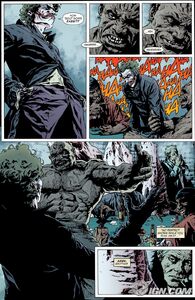 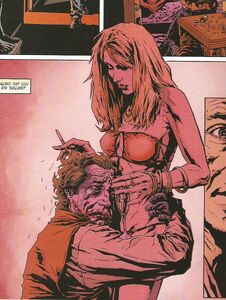 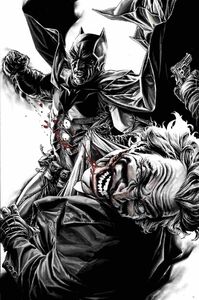 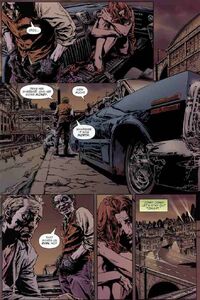 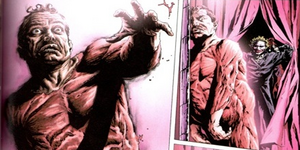 Joker watching Monty's last moments with pleasure.
Add a photo to this gallery

Retrieved from "https://villains.fandom.com/wiki/Joker_(2008_Graphic_Novel)?oldid=4324992"
Community content is available under CC-BY-SA unless otherwise noted.