The Joker is a central character and one of the main antagonists of the 2009 TV series Batman: The Brave and the Bold. He is the archnemesis of Batman.

He was voiced by Jeff Bennett, who also voiced another Batman villain, D.A.V.E., in The Batman.

In "Game Over for Owlman", Joker teamed up with Batman to defeat Owlman when the villain was upstaging his own crimes. At first, Joker seemed to become good, saving Batman's life and even saving a child from getting killed in the crossfire. Eventfully, however, he joined Owlman when he gave him an opportunity to kill Batman at last. During the fight, he refused to let Owlman kill Batman as it was his “destiny” to do so. While the two are arguing, Batman manages to trap Joker and Owlman in wax. As Owlman was returned to his dimension in bondage, the Joker, alongside the other bad guys, were sent to prison. The Joker did comment that he enjoyed working with Batman before being loaded into the paddy wagon, restrained in a fashion similar to Hannibal Lecter. This results in Batman thinking that even someone like Joker can redeem himself. However, he changes his mind after Joker declares that next time, he will defeat Batman once and for all.

In "Legends of the Dark Mite!", the Joker makes an appearance as an illusion in the 5th Dimension. He was bowled over when Batman bowled Tweedledum and Tweedledee into the villains.

He also makes a cameo at Arkham Asylum in "Mayhem of the Music Meister!". The Joker appears again in "Death Race to Oblivion", in which he, Batman, Green Arrow, Plastic Man and Woozy Winks, Huntress, Guy Gardner, Catwoman, Black Manta and Gentleman Ghost are chosen by Mongul to race against his champion Steppenwolf for the fate of the planet. He ends up getting arrested by the heroes at the end of the episode.

He also appeared as the main villain in the episode "Emperor Joker" a partial remake of the "Emperor Joker" storyline in the comics in which he acquires Bat-Mite's limitless powers and uses them to reshape reality in his image. Joker’s girlfriend Harley Quinn made her first appearance as well. Joker kills Batman before resurrecting him multiple times. However when he is tricked by Batman into entering the latter’s mind he finds himself in a world were Batman doesn't exist, meaning he is sane, and relinquishes his powers to escape.

He appears again in the episode "The Knights of Tomorrow!", which was entirely a fiction story written by Alfred Pennyworth where an aged, dying Joker trains a new successor in a plot of revenge against Batman.

He reappears in "Joker: The Vile and the Villainous!" which shows the world through his eyes and shows that he and Batman are very much alike. He helps villains and crooks and they look up to him the same way Batman does with heroes. He foils Batman's plot to make Gotham safer but was sad when Batman saved his life. He reappeared again in "Night of the Batmen!" where he ends up taking advantage of Batman's injures along with several of his fellow rouges before Batman defeats him while in a mech suit. 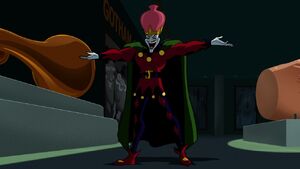 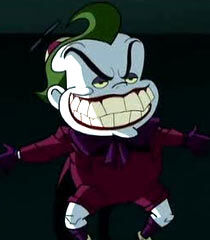 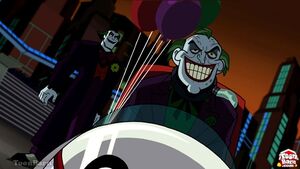 An aged Joker alongside his son, in the future
Add a photo to this gallery 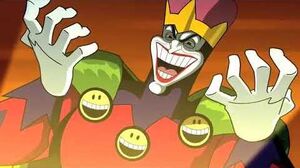 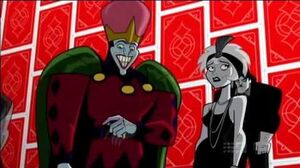 The Many Deaths of Batman
Add a photo to this gallery

Retrieved from "https://villains.fandom.com/wiki/Joker_(Batman:_The_Brave_and_the_Bold)?oldid=4283965"
Community content is available under CC-BY-SA unless otherwise noted.