The Joker
The Clown
Prince of Crime

Torturing and crippling others.
Committing acts of crime.
Sleeping with prostitutes while making them laugh.
Philosophizing about memories and cosmic nihilism.

The Joker is the main antagonist of the 2016 animated adaptation of Batman: The Killing Joke. He is a psychotic, clown-like criminal and the archenemy of Batman, who is bent on proving that anybody can be driven insane simply from one bad day.

He was voiced by Mark Hamill, who also voiced the Joker's DCAU incarnation, Chucky in the 2019 Child's Play film, Fire Lord Ozai in Avatar: The Last Airbender, Hobgoblin in Spider-Man: The Animated Series, Trickster in Arrowverse, Darth Bane in Star Wars: The Clone Wars and Arnim Zola in Ultimate Spider-Man.

Supposedly, he had initially been a nameless chemical engineer for Ace Chemicals that had been married and an expecting father before he quit his stable job, both due to his being creeped out by the location, and to do a dream job of being a comedian due to wanting to make people laugh and feel good.

However, he ended up struggling regarding his job, and was forced to contend with a landlady who hated him. Upon returning from his job where he was uncertain that he did a good job (the people in charge of the club indicated that they may call him back, but he was certain he blew a punchline for one of his jokes). He eventually lashed out at Jeannie, his wife, when the latter gave an "oh" response, before profusely apologizing for his behavior. He then vowed to make sure they find a nice neighborhood for them rather than a cheap apartment. Despite several attempts, he failed.

Eventually, he became desperate enough to turn to two crooks for help regarding aiding them in a heist toward a card shop next to Ace Chemicals. The men then offered a means to conceal his identity: The infamous Red Hood, which the man recognized from papers as being the same guy who raided an ice company the month before. Despite his hesitance in doing it, he ultimately decided to do so, in the hopes of getting his wife and himself a better future.

On the day of the heist that weekend, he was prepared to go through with it, even making sure to claim he was going out to a gala to ease Jeannie's concern. Unfortunately, just before he could go through with it, the police arrived at the bar he was at, and proceeded to escort him outside. He then learned from the police that Jeannie had died from a baby bottle heater accident that electrocuted her, his child dying with her. He then tried to call it off, realizing there's no longer a point to go through with the operation. Despite this, the crooks strong-armed him into committing the heist by heavily implying that they'll kill him if he doesn't cooperate, thus leaving himself with little to no options of backing out.

The man eventually arrived with the goons at the Ace Chemicals premises. The man then briefly reminisced about his walking to work. When noted that he had a funny-shaped head, in ominous foreshadowing of his future, he mentioned that he may become a clown over a comedian next time.

The already bad events of that night got even worse when he discovered that the Ace Chemicals had managed to include security after his departure (he had earlier told them that there was no security). With the men strong-arming him eventually killed by the security personnel, he then tried to flee. He then ended up cornered by Batman just as the former pondered out loud what he did to deserve it.

The man then tried to bargain for his life, but then tripped and fell over the railing, falling into one of the drainage vats below. After his trip through the drainage vat, he removed his red hood, wondering why he's feeling itchy only to discover his face, and most likely his entire body, had been discolored due to the chemicals he was exposed to in the drainage vat, his hair being turned green, his face becoming chalk-white, and his lips becoming red, giving him the appearance of a clown.

This, as well as the traumatic events of the overall night and what happened before, proceed to drive the man completely insane, causing him to laugh hysterically in anguish at the revelation, thus giving birth to the Joker. Whether this was actually true or not is unknown, as Joker later admitted that even he isn't sure exactly what transpired on his day since his memories tended to change every time.

He then spent time fighting Batman various times, and being locked up in Arkham Asylum, with his frequent escape attempts having him see prostitutes. Sometime later, he ended up trapping people and gassing them with Joker venom.

3 years later, his earlier action attracted the investigation of Batman after they uncovered the gruesome crime. Batman, who was planning on seeing the Joker anyways due to being troubled by their bleak future of ending their feud by killing one or the other and hoping to avert such a future, then proceeded to visit Arkham Asylum. Unfortunately, by the time they had arrived, Joker had not only escaped from the Asylum, but even went as far as to leave behind a body double in his cell, which Batman realized when talking with "him" due to his white "skin" coming off.

He then went over to an abandoned amusement park, and after conning the carny into giving him control, poisoned him with Joker venom after gaining control of the park. He then arrived at Commissioner Gordon's place, proceeding to shoot Barbara Gordon in the lower abdomen in a way to ensure paralysis, and made sure to do it right in front of her father. Gordon angrily attempts to stab Joker with a pair of scissors for this, but the Joker's thugs stop him by beating him up. Telling his goons to take Gordon away, Joker proceeded to take Barbara's clothes off and take pictures of her in various states of undress, although assuring to her that he's only doing this specifically to prove a point to her father.

Afterwards, he then had his goons strip Gordon naked and, after giving a philosophical speech about how Gordon is to be an experiment in regards to how even the most common man can be driven insane, then proceeds to psychologically torture the commissioner with a song about going insane and showing a slideshow of Barbara Gordon in various states of undress and in pain. Afterwards, he then caged him up and showed him off as an exhibit just as Batman arrived.

He then briefly fought Batman before fleeing, dousing him with acid. Confident in his victory, Joker then proceeded to tell Batman that even if he arrests Joker, he's already too late as Gordon's now insane (or so he believes), and proceeded to deduce that Batman had a bad day just like he did.

He then ambushed him and gave him a beatdown in the upside down room of the funhouse, and proceeded to rant about how monstrous and pointless the world and morality is before demanding to know why Batman not only doesn't see the funny side, but isn't even laughing.

Batman then turned the tables on his nemesis literally by flipping him right on the upside down table, before telling him that it is because he had heard the joke before and it wasn't funny the first time. Batman then told Joker that Gordon had told Batman to bring him in by the book, making it clear that despite Joker's actions, he actually failed to drive Gordon insane, with Batman then theorizing that maybe not everyone cracked and maybe Joker is alone in his madness. Joker widened his eyes briefly at this possibility, but then denied it before trying to shoot Batman, who tackled him out of the funhouse.

Outside of the funhouse, Joker retrieved his gun, but it ended up being a flag gun. Frustrated by the failures and possibly affected by the revelation that maybe he is alone in his insanity, Joker concedes defeat and tells Batman to finish him off. However, Batman refused to do so, saying that if what Joker said about having a bad day is what drove him to insanity was indeed true, he can help him recover from his insanity.

Batman offers to help him get rehabilitated, but although Joker seriously considered the possibility for redemption, he sadly declined, saying that it is far too late for him because of his actions, showing regret over what he had done. Joker then chuckled due to it resembling a joke he heard about inmates in an asylum, and explains the joke to Batman. The joke ended up being so funny that even Batman bursts into laughter with Joker, who is delighted that he actually made Batman laugh. Joker's laugh then suddenly stops as Batman continues to laugh. It can be assumed that Joker was arrested afterwards. However, as with the comic this movie is based on, it's left unclear what happened to the Clown Prince of Crime. 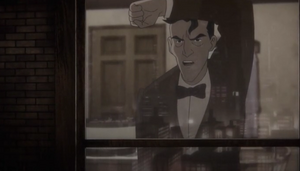 The Joker before turning mad. 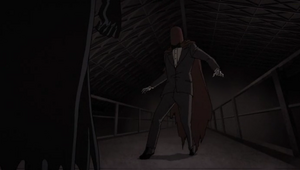 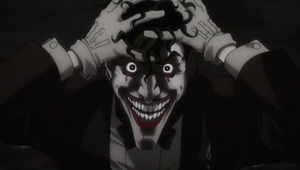 Joker's mad laugh and breakdown upon being transformed. 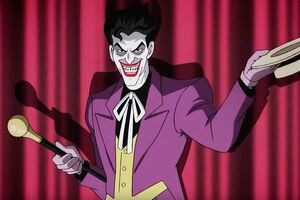 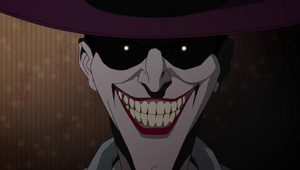 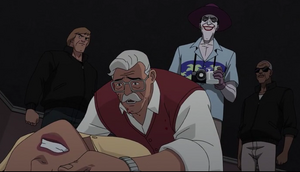 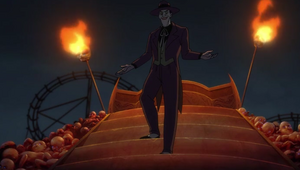 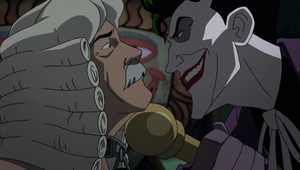 Joker with Gordon during his "joke". 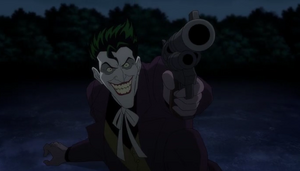 Joker draws his gun on Batman. 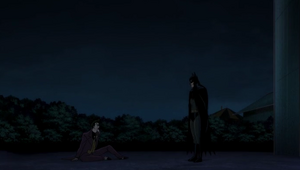 Joker is defeated by Batman. 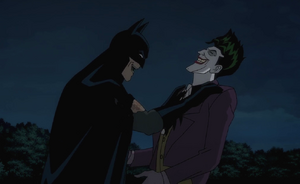 Joker's final scene as he shares a laugh with Batman over a good joke he said. 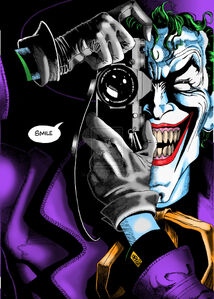 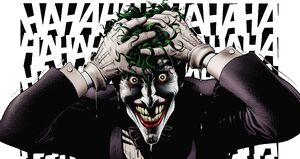 The Joker after falling into the chemicals.

Joker tells a joke to Batman and both of them laugh 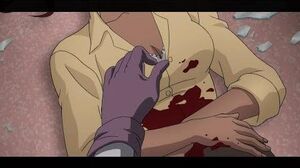 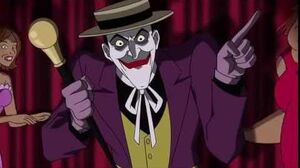 The Killing Joke - I Go Looney 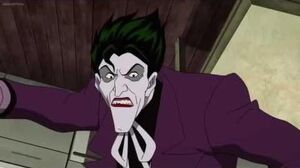 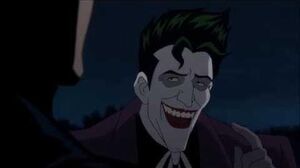 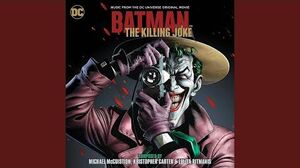