Take over Feudal Japan and alter history (both failed).

Attempted alteration and violation of the past.
Attempted murder

The Joker, or Lord Joker as he refers to himself, is the main antagonist of the 2018 movie, Batman Ninja. He is Gotham City's most dangerous criminal and the archenemy of the Batman who was flung back in time to Feudal Japan, where he established himself as the country's most powerful warlord.

He was voiced by Wataru Takagi in the Japanese version, and by Tony Hale in the English dubbed version, the former of whom also voiced Hammerhead and the other James Suggs, Apothecary Gary and Doctor Psycho.

Joker's appearance is basically the same as all his incarnations, with white skin, green hair, yellow eyes with red irises and purple and green clothing. However, upon becoming a daimyo, he changed to an overall-style to resemble one and has even grown a mustache.

Like any version of the Clown Prince of Crime, Joker is a complete psychopath whose only goal in life is to spread as much chaos and misery as possible. At first, he never wanted to be a "lord", but upon ascending to such a title in Feudal Japan, he seems to have grown accustomed to it. He has no qualms about altering history to his own ends, introducing coal-powered technology in the Sengoku period even though the industrial revolution wasn't until several centuries later. He's also taken up the habit of making gestures similar to that of a Kabuki actor. According to Robin, he has a nasty habit of underestimating his opponents. Joker did seem, however, to care for his girlfriend Harley Quinn and treat her pretty decently.

The Joker has been terrorizing Gotham City for years, with the only one to stop him from being the Batman. One night, he is summoned to Arkham Asylum along with his cohort, Harley Quinn, as well as Penguin, Poison Ivy, Deathstroke, and Two-Face, by Gorilla Grodd to witness his newest invention, the time-distorting Quake Engine (the real purpose was to send these villains far away so Grodd can rule Gotham).

However, Batman interferes with the experiment, causing the device to malfunction and send him, Grodd, and the villains back in time to Feudal Japan during the Sengoku period, when different states wage war with each other for complete control of the country. Taking advantage of the current situation, Joker and the other criminals trick the local daimyos and usurp their positions, with Joker and Harley taking over the capital of Edo.

When Batman arrives to Feudal Japan two years after the others did, he is immediately attacked by samurai in masks that bear the Joker's face. Eluding them, he makes his way to Edo castle, now renamed Arkham Castle and sees the Joker talking with one of his minions. But then the real Joker appears behind him and the other reveals herself to be Harley. The Joker tells his nemesis that he has become "Lord Joker", the most powerful man in all of Japan and then the two proceed to fight. Growing bored, Joker summons his henchmen to finish the fight, but the Batman manages to escape them.

After finding the Batmobile, Batman rides his way to Arkham Castle, but then the Joker activates his castle to become a fighting robot and crushes the Batmobile, Batwing, and Bat-cycle. He corners the Joker, but then the Clown Prince prepares to kill a mother and child with his castle mech. After defeating a sumo-wrestling version of Bane, Batman saves them, but it turned out to be Harley who injures him. As they surround him, Joker mocks the Dark Knight how his heart had cost him victory as well as his life. Before they could finish Batman, however, bat-like ninjas accompanied by a flock of bats come in to rescue him, much to Joker's annoyance. 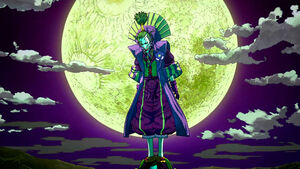 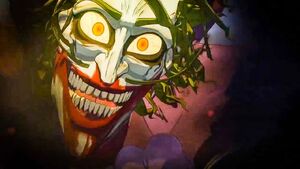 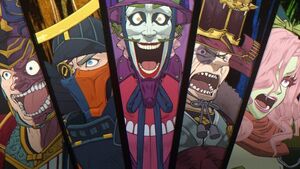 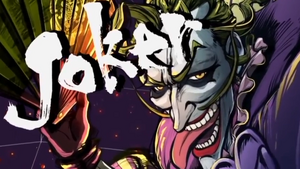 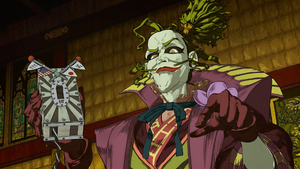 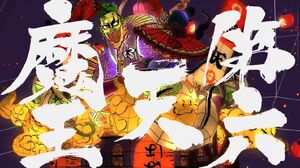 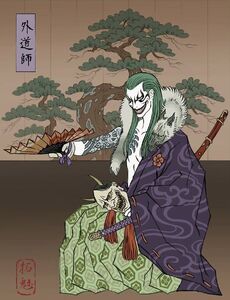 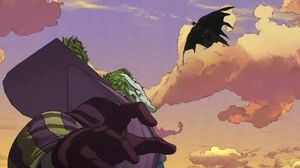 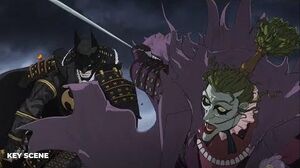 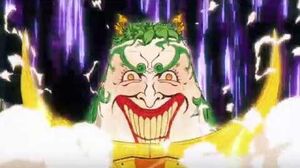