Abusing Harley Quinn.
Causing as much chaos and death as possible.

Wanting to plunge the world into chaos and torment Batman, Joker sought to corrupt Superman by orchestrating the death of his pregnant wife Lois Lane and the destruction of Metropolis. These actions successfully drove Superman insane but also drove him to murder Joker in retribution, leading to him become a delusional fascist enforcing peace through fear and brutality, becoming the tyrannical ruler of Earth and killing any and all who opposed him. This ultimately causes the Justice League civil war that lasts 5 years and kills many superheroes, and millions of innocents in the crossfire. It also results in heroes and villains alike resenting the clown for everything he's done.

Additionally the Joker of the Main Universe also appears in the Injustice Universe during the events of Injustice: Gods Among Us. The Injustice Joker also reappears in Injustice 2 as a hallucination, with his actions still causing problems several years after his "masterpiece" resulted in the Regime's creation.

Joker decided he was tired of trying to corrupt Batman and instead decided to corrupt Superman. Joker kidnapped Lois Lane, killing Jimmy Olsen in the process, and rigged a nuke trigger to her heart. He also combined Kryptonite with Scarecrow's fear gas to create a gas that could affect Superman. When Superman tried to rescue Lois, Joker exposed him to the gas and he believed Lois was Doomsday and threw her into space.

Tragically this activated a nuke that destroyed Metropolis and killing 10 million citizens and even some other superheroes. Joker was taken to the G.C.P.D. laughing hysterically where Batman interrogated him. Joker explained that he'd grown tired of trying to corrupt Batman so he decided he wanted to corrupt Superman, the most powerful being on Earth. Batman, however, was confident Joker would fail just the same, but they were interrupted by a grief-stricken Superman who assaulted Joker several times and refusing to stop when Batman tries to get him to back down.

Joker taunts Superman several times over the number of loved ones he's lost, belittles him for believing he can reform him and have a family, and indicates he plans to continue his schemes on an ever-larger scale. Vengeful and broken Superman murdered him in cold blood, tearing his heart out with his bare hands, right in front of a horrified Batman while Joker laughed hysterically. It is heavily implied that Joker deliberately engineered his own death at the hands of Superman to ensure the latter's fall into a villain.

After his death, the Joker's actions have a profound effect on Superman who reorganized the Justice League into the Regime. The Regime sought to enforce world peace at any cost by killing all criminals they believed irredeemable without due process, toppled governments who neglected their people and created their own military to keep people in line. They also compromised enough to work with several of their once archenemies and even extorted the aid of former criminals into their cause in exchange for immunity.

However, they also silenced anyone who spoke up against them from government officials, reporters, and even protestors. However, Batman didn't agree with Superman and organized a team of heroes who shared his beliefs into the Insurgency, whose allies even included former villains too, to stop Superman's Regime. Effectively this sparked a civil war within the Justice League that resulted in millions of deaths and leaving Superman Earth's most dangerous villain.

However Joker's death had some positive effects as Harley Quinn in her isolation and grief started to realize the depths of her crimes which gradually led to her reforming and becoming one of Batman's most trusted allies, despite her involvement in Lois' death. Furthermore, most villains, including some of Joker's former henchmen, finally show him for what he truly was.

During encounters the topic of Joker is often discussed by Superman and Batman and the former's killing of him and the latter's refusal, knowing it would turn him into a monster like it had Superman.

Normal Joker first appears after the Justice League discovers Lex Luthor gave him a nuke to blow up Metropolis. He is seen arming the bomb next to a statue of Superman in Metropolis, much to the excitement of his world's Harley Quinn. After Harley discovers Batman was teleporting to their location, the Joker forcefully makes Harley return to their van as he has a conversation with Batman and takes the bomb off standby.

As he activates the bomb, multiple members of the Justice League quickly try to intercept him, only to teleport to the Regime universe, pulling Joker with them. Batman and Joker are separated from the others who teleported, namely Wonder Woman, Green Arrow, Aquaman and Green Lantern. The Joker, enraged that his trigger failed to detonate the bomb, blames Batman for their displacement and attacks him. Batman manages to subdue him, just as Regime troops appear and attempt to apprehend the two. Batman uses a sonar distrust or and smoke bomb to escape the troops, while Joker sneaks away during the ensuing chaos.

The Joker tries to find his old gang by hijacking and killing the troops in the van and traveling to Gotham City, where he discovers he is well known in the Regime world, exclaiming; "My fame proceeds me!". Batman, having followed the Joker to Gotham, attempts to launch a surprise attack. Joker becomes aware of Batman's presence beforehand, and counters him, injuring Batman's leg.

Because of this, Joker defeated Batman and almost sprays him with Joker Venom. Just as Joker is about to "put a smile" on Batman's face, he spots alternate Hawkgirl and Yellow Lantern and runs off. Joker watches from afar as they arrest Batman and take him away. As the Joker retires to his original plan, he finds himself being approached at gunpoint by an altered Harley Quinn, now going by her real name, Harleen Quinzel.

Though he tries to persuade her that he is in fact, the Joker, Harleen insists that the Joker is dead, and that he is just another impostor. Outraged, Harleen attacks him, but is quickly subdued by him. Recognizing his fighting style, Harleen realizes he is the Joker and embraces him. The two then travel to the abandoned Arkham Asylum, where Harleen introduces Joker to the "Joker Clan", a large gang that worships Joker as a martyr, and combats the Regime through acts of terror.

The Joker addresses the Joker Clan, introducing the 5-U-93-R pill to them under the name "Happy Pill". This would provide him and the gang members with superhuman durability. The event is then cut short when Hawkgirl and Nightwing arrive with a fleet of Regime soldiers to attack the clan. The Joker is repeatedly shot with an assault rifle by a trooper, but survives and humorously thanks the "Happy Pill". Hawkgirl attacks the Joker, believing him to be the Joker from their world.

The Joker defeats Hawkgirl and attempts to remove her feathers with his knife. Nightwing notices this and quickly charges towards him. The Joker throws his playing cards at Damian, overpowering him. He proceeds to mock Nightwing for leaving Batman and becoming Superman's 'pet', believing him to still be Dick Grayson. A fight ensues, and Joker defeats Nightwing. Altered Batman, Green Lantern, Aquaman, Green Arrow and Wonder Woman rush in, and both Hawkgirl and Nightwing retreat thanks to Harley's call for help.

The group is surprised to see the Joker, which leads them to the conclusion that Batman was sent to the parallel dimension as well. Joker is apprehended by Insurgency Batman, who sees him just as evil as his counterpart. The Joker is later broken out of custody by Harley Quinn, despite her orders from Batman. The two of them hijack a Regime vehicle and confront Insurgency Lex Luthor on his way to assist the Insurgency forces against the Regime.

The Joker orders Harley to take down Luthor and take his suit, but she fails. Annoyed with her, the Joker fires Harley and attempts to kill her, but Luthor intervenes and subdues him. Enraged by his attempt on her life, Harley tries to kill the Joker with his knife, but Luthor convinces her to stand down, saying she's outgrown him. In addition, Harley Quinn ruined any chances at his gaining control when the Joker Clan arrived, citing that Lex Luthor was on their side while Joker wasn't.

In the epilogue, the Joker is shown being lead at gunpoint by Harley Quinn to the portal that will take him back to his dimension. There, he was likely convicted of the crimes he committed in both universes.

Defeating Insurgency Superman in Injustice Mode with the Joker will reveal that the Joker, despite failing to gain control of the Joker Clan in the alternate dimension, managed to create a similar group in his original dimension, and managed to take power via various disasters and become a sort of Messiah.

The Joker appears as a hallucination in Harley Quinn's mind after exposure to Scarecrow's fear toxin who tries to corrupt her into returning to her villainous ways by killing a hallucination of Batman. But Harley refuses and fights "Joker" proving how much she's outgrown him, defeating the hallucination. Joker is also mentioned numerous times throughout the game as his actions are still affecting the Justice League even 9 years after his death.

The Joker appears as a playable character. Although the battle mode is overall non-canon, it's unknown how the Joker appears here. He's either a hallucination, an alternative universe version or got revived through some unknown means. Unlike most appearances, Joker here does not have as much charm to contradict his heinous acts. The intros display this by having all other characters, even those as vile as him, express their contempt for all the suffering he caused. This further showcases how vile this version of the Clown Prince of Crime truly is. His impact and full agency over his actions, show how terrifying a real-life version of him would be.

During his non-canon Arcade Ending, Joker defeats Brainiac before taking over his ship. However, rather than merely set them free, he watches in delight as he describes how much chaos his decision caused. It turns out that most of the aliens he freed were evil and turned to war. His ending concludes as he laughs. 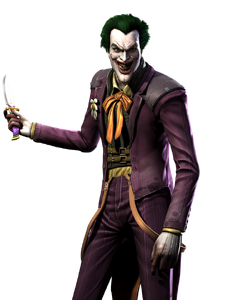 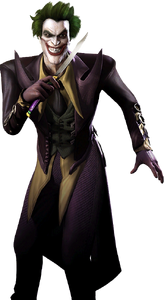 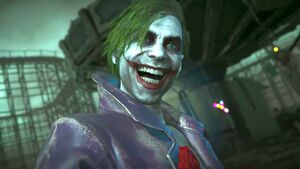 The Joker in Injustice 2. 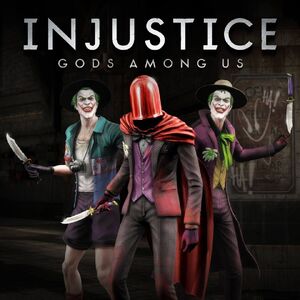 Joker's The Killing Joke Skin Pack.
Add a photo to this gallery 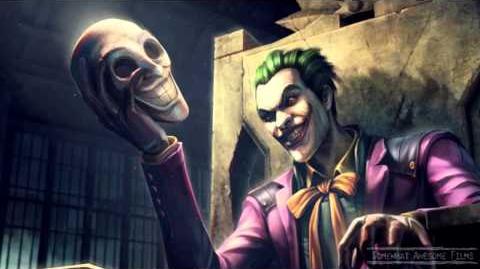 Injustice Gods Among Us The Joker Ending 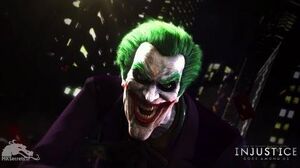 Injustice Gods Among Us - S.T.A.R LABS The Joker - ☆☆☆ COMPLETE
Add a photo to this gallery

Retrieved from "https://villains.fandom.com/wiki/Joker_(Injustice)?oldid=4283659"
Community content is available under CC-BY-SA unless otherwise noted.