The Clown Prince of Crime

Stir up as much chaos in Arkham Asylum as possible.

The Joker is one of the villains in the DC Elseworlds story "JLA: The Nail" where he has acquired hi-tech gauntlets that have made him far more dangerous than ever before. Notably this version of the Joker was so despicable and evil in terms of his actions that he managed to get Batman to outright kill him.

This version of Joker first appears having staged a mass prison break at Arkham Asylum via his new power-gauntlets. Setting himself up as the ruler of the asylum, he kills Killer Croc and Clayface for challenging him and then forces the other inmates to fight each other for his amusement. Catwoman proves to be the victor, and Joker expresses the intent to make Catwoman his slave. When Catwoman attacks him, Joker knocks her out, and is then attacked by Batman. Effortlessly overpowering him with his new weapons, Joker notes how unsatisfying his victory is, as Robin and Batgirl are absent. When the two show up (against Batman's orders to stay put) Joker overpowers them as well and brutally murders them in front of Batman. Recovering just in time to watch this, a horrified and disgusted Catwoman attacks Joker with the intent of killing him, but Joker again knocks her out. Now freed, an enraged Batman attacks the Joker and after a battle that goes to the outside of the Asylum, snaps his neck, ending his foe's reign of terror, although at the cost of causing the press to indicate that all metahumans were inhuman monsters. 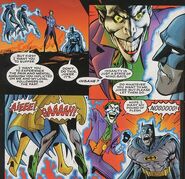 Joker murders Robin and Batgirl in front of Batman.

Batman and the Joker have their final battle.

The Joker's demise.
Community content is available under CC-BY-SA unless otherwise noted.
Advertisement