Joker is the secondary antagonist in Justice League Action. He is Gotham's most notorious criminal mastermind and Batman's archenemy.

He was voiced by Mark Hamill who has also voiced multiple incarnations of the Joker over the years.

Once a small-time crook, the Joker fell into a vat of chemicals that turned his skin white, hair green and his lips red like a crazed clown.

After becoming the Joker, he causes mayhem at Gotham City as Batman's foe. He often tries to gas Gotham or defeat Batman. Once he's captured by Mongul who forces Joker to make his warriors laugh. When Joker does so by shocking Mongul, Mongul tries to throw Joker into space but Superman saves Joker. 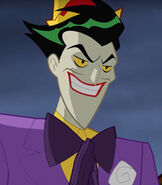 Retrieved from "https://villains.fandom.com/wiki/Joker_(Justice_League_Action)?oldid=3857834"
Community content is available under CC-BY-SA unless otherwise noted.