Intermediary of the Three Commanders

Joker (also called Rascal in Glitter Force) is the secondary antagonist in Smile Pretty Cure!, serving as Pierrot's liaison to Wolfrun, Majorina and Akaoni of the Bad End Kingdom. His appearance is based off Harlequins.

He is voiced by Mitsuya Yuji in the Japanese version and Keith Silverstein in the English version.

Joker is a spawn of Pierrot, leader of the Bad End Kingdom, seeking to causing much chaos and destruction to satiate his own fun while destroying anything that inspires hope in others. Prior to the series, he paid a visit to Marchenland and confronted a trio fairies who ostracized and mistreated for being based on villainous fairy tale characters. Joker exploits their resentment to become the Bad End Kingdom's commanders Wolfrun, Akaoni, and Majorina, having them lead the charge on their homeland. While having the commanders target Earth for the despair needed to revive Pierrot, Joker commences his hunt for the wish-granting Miracle Jewel with the intent of shattering it.

Joker first appears in the series, when the three commanders are playing old maid, emerging from a "Joker" card that the three are using. He then goes on to explain the Bad End Kingdom's agenda and how they would eventually do this to the entire universe starting with Earth. He later takes a break from his hunt for the Miracle Jewel to give the three commanders blue noses to create Akanbes resistant to the Precures' individual attacks since they are not made from cure decor.

In the Bad End Kingdom, Joker appears landing softly on a lake, holding and shuffling a pile of cards. When he lands on the lake, the ripples cleared to show the reflection of the clock that shows how much Bad energy collected. Joker tells to himself that soon, when it is full, it will revive the Emperor Pierrot. He picked a Card and it turn into a Rose and it wilted black as a couple of petals fallen and float on the water. Later he is now on the bridge still shuffling cards and remembering Candy's power of granting the Miracle Jewels. Then Akaoni appeared saying that he's going to get bad energy and Joker cheered on to Akaoni to say "Good Luck". At the end, The Precures got all of the Decor's. Just as they were going to put it in the Decor Decor, Joker swooped down stealing the box and last decor, preventing them from reviving the Queen. Then he throws a card at in front of Candy and suddenly the card multiplied into many, got on and covered Candy and when the cards flew away, she was gone and suddenly in Joker's hand. Joker capture her because she has the Miracle Jewels to grant wishes and is a great support to the Precures. Then he leave doing the same card trick on Candy to flee. He laughed as it echoed when he left and Miyuki, Pop, and the Precures trying to call out Candy's name , Somehow he survived Beauty Blizzard and revived the commanders from death.

After reviving the Generals, Joker once again took the sidelines, observing the battle between the Pretty Cure and the Generals. He did appear once, when he trapped first Candy, then Miyuki's friends into the Ball of Neglect, which put them in a dream world where they're put in a trance of doing nothing but 'having fun' without hardships, the effort was eventually defeated when Miyuki snaps the rest of the team back to reality. Later, Joker offered the Black Nose to enhance the power of Akanbes. What Joker didn't tell at first was that the Black Noses would drain the lifeforce of the commanders.

When the Commanders fell due to the Pretty Cures' new resolves after threatening them to show initiative or be forced back their original forms, Joker decides to personally deal with Reika Aoki by using her crisis over staying with the PreCures or study aboard in to England to break her resolve. The Pretty Cures broke into the dimension and despite showing a brave front to see Reika off with a smile, they eventually couldn't keep up the masquerade any longer and started bawling, not wanting to see Reika off, and expectedly, Reika also cried due to not wishing to separate, thus she made her decision to forego going overseas to protect humanity as Cure Beauty. Joker's response was to laugh at what he called 'silly show', which eventually caused Reika to fly into calm rage, transform into Cure Beauty and defeated Joker using her new Beauty Blizzard Arrow.

After being defeated by Cure Beauty, Joker called up the three Commanders again and gave them one last chance to defeat the Pretty Cures and take the Miracle Jewel that Candy turned into by giving them a Black Nose to use on themselves despite the risk of its use. Though the commanders are purified by Miyuki, Joker has no more need for them as they filled the quota of despair to revive Pierrot. Joker then uses the last Cure Decors to create the Bad End Pretty Cure to hold off the Pretty Cures while he goes after Pop and Candy, revealing his intention to kill the latter before Royale Queen intervened. Upon realizing Queen is only an hologram and that the Miracle Jewel is a farce, Joker decides to focus on gathering more negative energy for Pierrot and turns the planet into a desert wasteland.

By that time, the Pretty Cures found enough resolve to defeat their clones and returned to the real world. Feigning breaking down, Joker reveals they are too late as Pierrot has been revived. At that time, a puddle of black paint made from Pierrot fell onto Joker. He laughed as he dissolved into a black paint puddle, reuniting with Pierrot and claiming that they will destroy the world together. But in the end, the Pretty Cures defeated Pierrot for good.

The epilogue novel reveals that Joker survived Pierrot's destruction and acquired his master's power as an immortal embodiment of resentment yet lacked the ability to regain his original form. Joker devises a scheme to possess Miyuki's picture book and makes his presence once brought into the Mysterious Library, corrupting the area to prevent the PreCures' escape while forcing them into simulations of their lives ten years in the future to feed on their negativity from their adult lives. But the Precure break free while he assumes a new form called Bad Joker before being destroyed by them, though hinted to eventually reconstitute himself.

He can use his cards to make them big to defend or throw one card make many to capture and teleport them or himself. In Episode 22, he is capable of fighting all the PreCures using offense and without an effort (include the purification attacks). He provides the Commanders with Black Paint of Darkness and Picture Books of Darkness to create Dark Zones, his being a purple and black sky. He also provides Akanbe noses from the baubles on his headdress, using yellow-nosed Akanbes. He can also created the Hyper Akanbe noses with the same black paint of the darkness. 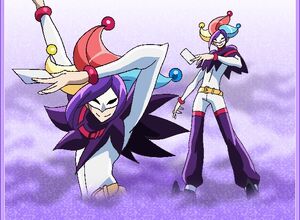 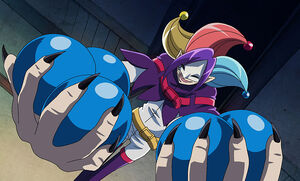 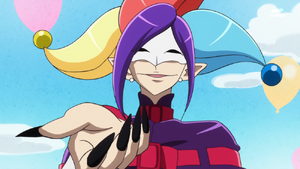 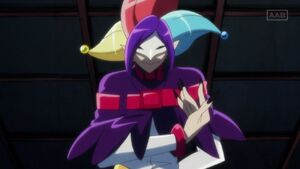 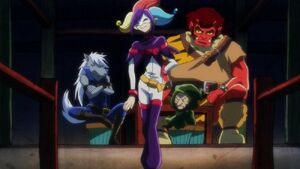 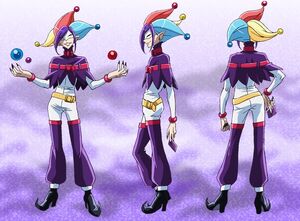 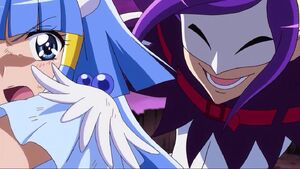 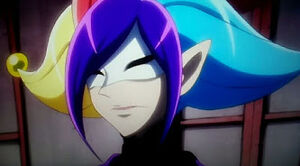