To kill Batman, become rich and destroy or gas Gotham City with Joker Venom (all failed).

The Joker is the overall main antagonist of The Batman.

A very different interpretation of the Joker appeared in the animated series The Batman, voiced by Kevin Michael Richardson.

In this series he is only referred to as simply "Joker" and never as "the Joker" - he had wild green hair, red eyes, dark red lips and a milky blue tongue. He was born by falling into a vat of chemicals, which bleached his skin, dyed his hair and drove him to insanity. In his first few appearances his costume consists of a purple sleeved straitjacket, blue pants, finger-less gloves and bare feet. Later in the series, he regressed back the more traditional garb of a purple suit and spats, but still had wild hair and wore no shoes, save one episode (which had mechanical stilts concealed in them). Joker also moves and fights with a monkey-like style, using his feet as dexterously as his hands, and often hangs from the walls and ceilings.

Whilst it can be argued that this version of the Clown Prince of Crime more resembles the colorful, comic relief character featured in the comics of the 1950s and '60s, he is still a highly dangerous, knowledgeable and cruel character - whilst most of his crimes are silly and prank-like in nature, they can still be legitimately destructive. He treats each of his crimes like an elaborate joke designed to make his victims literally die laughing. Due to his unpredictable nature, bizarre appearance and unnerving instinct for the absurd he has earned a reputation as one of the most dangerous criminals in Gotham.

He believes himself to be inextricably linked to the Batman, and considers him to be his favorite sparring partner and opponent - he says their relationship is "like comedy and tragedy - two sides, same coin". His weapons include his signature Joker venom (called "Joker Gas" in the series), razor sharp playing cards, grenades with Joker smiles on them and a bomb shaped like a Jack-in-the-Box. One of his most famous crimes was creating the supervillain Clayface. Joker captured and tortured detective Ethan Bennet, in order to drive him mad, he exposed Bennet to "Joker putty" a deadly chemical he created which mutated Bennet transforming him into the shape-shifting monster Clayface. As Clayface Bennet would attempt to get revenge on Joker many times. It is possible that this incarnation of the Joker has an origin similar to the Killing Joke, as he mentions having always wanted to make people laugh, in a flashback to his origins he is shown wearing red clothes after emerging from the chemicals suggesting at the very least a red hood origin. It is also hinted that Joker will one day cripple Batgirl like in "the killing joke" as Barbra Gordon is shown to be confined to a wheelchair in the future. He also maintains a rivalry with the Penguin for the title of Gotham's greatest criminal. In one episode, there's a near almighty version of Joker, Joker 2.0, who's presumed based on Emperor Joker.

This Joker has often switched from a prankster-like clown to be a much darker murdering psychopath and his body count can be arguably ranged from 19-30 victims on screen.

At one point Joker got bitten by Dracula and became a vampire. His hair turned white, his eyes turned blue-white, and his clothes were affected as well. Unlike all the other vampires however, he retained his individuality and his speech as well as gaining vampiric superhuman strength and speed. Nevertheless he is still incapable of betraying Dracula's resting place. He stays this way until Batman managed to find a cure and revert Joker back to normal. As a side effect, Joker didn't remember anything after his meeting with Penguin outside of Dracula's mausoleum and is sent to Arkham Asylum shortly after being cured.

Like his other incarnations pasts, he fell into a vat of chemicals transforming him into Joker. Though it doesn't say that he was involved in any crimes or fought Batman when he fell in.

At Arkham Asylum, Joker released the inmates and even poisoned one of the workers with Joker Venom, but he was later cured. Joker encountered Batman at the asylum as the Dark Knight was shocked to see him. They fought but Joker escaped, planning to spread his deadly laughing gas all around the city. While on his Blimp, he fought Batman and was nearly knocked off the edge, he then landed in the ocean and finally captured by the police.

Later he escaped Arkham Asylum, and was now wielded with a laser-like gun which could transform people into Human-sized playing cards. With this, his new goal was to execute those who "did him wrong". Batman confronted him and saved his captives, finally defeating Joker with his own weapon and sent him back to the asylum.

Joker and his two goons, Punch and Judy, now used a weapon which melted anything. He robbed a Bank and escaped the police, finally heading to a Statue which he melted. The Detectives and Batman fought him and his goons, but he once again escaped. Batman soon confronted him when he captured Detective Ethan Bennett during his attempt to drive him insane like him by destroying his mind. Joker used a smiling shield to help him fight Batman but Batman knocked him out with a punch. It is later revealed that the gas from his weapon caught Ethan; thus transforming him into Clayface.

When a rare Black Siberian is stolen, Batman and Batgirl suspect Catwoman is responsible. However, Joker is the true thief and brings the cats to Killgore Steed. It's a maze of doom filled with dangerous creatures, so Joker forces them to run for their lives. The three become successful in escaping alive and ultimately defeat the Clown Prince of Crime once again. Joker also ends up betraying Killgore by gassing him with Joker Venom.

Joker becomes the Conductor of a Train and uses its lights to manipulate others, making them have tortured, uncontrollable laughter and commit crimes by stealing things and placing it on Joker's ship. Joker plans to escape the city once and for all with many valuables before finally blowing it up with many Dynamite below. The three heroes manage to steal the battery of the detonator to prevent the explosion and defeat him again.

Two criminals known as Wrath and Scorn plan to end Batman and Robin by helping criminals. They helped Joker steal money and he alongside Killer Croc, the Ventriloquist and Penguin where told they'll help them defeat Batman. Though the two know his secret identity and finally end him while they're in custody, Joker infects them with laughing gas to stop them from talking and claims he'll be the only one to end Batman. 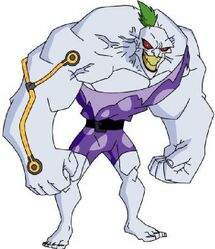 Joker in his alternate costume
Add a photo to this gallery 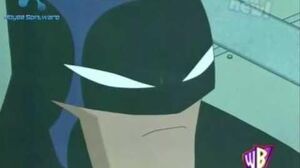 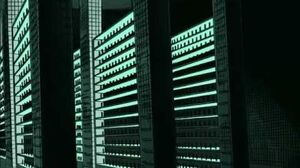 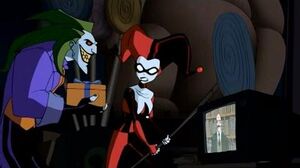