Attempt to launch a war between the USA and the USSR (failed).

Kill Batman (failed), or make him lose control and kill him, destroying both his image and his reputation (succeeded, but at the cost of his own life).

Like in most incarnations, the Joker is a psychopathic mass murderer who is Batman's archenemy. Following Batman's retirement, he gets confined to Arkham Asylum and falls into a catatonic state, but when Batman returns ten years later, he comes back as well for a final showdown with the Dark Knight.

He is also a major antagonist in the 2012-2013 animated film adaptation of The Dark Knight Returns, appearing as a minor character in Part 1 and later the main antagonist of Part 2.

He was voiced by Michael Emerson, who also played Zep Hindle in Saw, Benjamin Linus in Lost, Alpha in Ben 10-Generator Rex: Heroes United and Cayden James in Arrow.

While the Joker doesn't appear in the story, he gets mentioned at the end of it. After Batman succeeds in forcing Gillian B. Loeb to resign as Commissioner and James Gordon is promoted to Captain, Gordon reunites with him on a rooftop and informs him about somebody known as the Joker, who is plotting to poison Gotham's reservoir.

Well into his 60s, the Joker spends 10 years at Arkham Asylum in a near catatonic stupor. When news hit the wire that Batman, his arch-nemesis, has come out of retirement, the Joker's conscious mind resurfaces and he decides that it's time for him to come out of retirement as well. As such, when he receives a visit from his former henchman Abner, who has been asked by the "reformed" Harvey Dent to fabricate some bombs for him, the Joker instructs him into rigging the bombs to sabotage Dent's plant, but Batman foils the attempt. The Joker also asks Bruno, his Neo-Nazi henchwoman and "girlfriend", to rob random stores in Gotham City, possibly to raise funds for his operations.

After the Joker manipulates Doctor Bartholomew Wolper, his naive and glory-hound psychiatrist, into declaring him 'cured', the doctor proclaims the Joker as merely a victim of Batman's own psychosis, which is quite stupid as he killed tons of people in the past without Batman's influence. The Joker is invited to the Late Night with David Endochrine talk show, where his psychiatrist had intended to publicly reveal his 'recovery'. However, the Joker instead uses Bobby to murder all the audience, including Wolper and Endochrine. Afterwards, Joker then breaks into Selina Kyle's escort service and, after he brainwashes her with a kiss via his mind-control lipstick, proceeds to order her to bring one of her escorts, Elsie, and then brainwashes her offscreen (presumably via the same method as with Selina) to manipulate the Senator Hector Alejandro Noches into declaring nuclear war between the US and the USSR (presumably also having her wear the same mind-control lipstick to ensure that she got the senator to agree).

Later on, the Joker dresses Selina up as Wonder Woman, bounds, beats and gags her as well as presumably rapes her before he takes hostages at a local carnival along with Abner but not before poisoning boy scouts with venomous cotton candy. After he tracks down the Joker there, while Robin goes after Abner, Batman engages his foe in the hall of mirrors, where an extremely violent and brutal showdown-turned-fist fight erupts between the two. The Joker drops a mirror on Batman and makes his escape into the tunnel of love ride. Batman reappears and engages the Joker a second time in a far more violent fight, in which the Joker hysterically stabs him in the stomach several times. Mid-stab, Batman instinctively breaks the Joker's neck just enough to paralyze him.

As a group of innocents, who believe that Batman murdered the Joker, scream and flee, Batman confronts his opponent. Although the Joker eagerly provokes Batman into finishing him off, Batman is unable to, much to his disappointment. Nevertheless, the Joker sneers at him, and arrogantly claims that he won the fight - he made Batman lose control and 'kill' him, and the people of Gotham would condemn and hunt him because of it. The Joker then finally says "See you in Hell!., before, in a last act of revenge against his enemy, twists his neck just far enough to kill himself, committing suicide and framing his enemy for his own murder. After so many years of waging a seemingly eternal one-on-one war, Batman had finally won the fight against the Joker, but the Joker had won their argument. In the end, Joker died happy believing despite his death he had won he made Batman snap and then framed him for his death without even giving Batman the satisfaction of killing him.

As SWAT officers led by Commissioner Ellen Yindel make their way into the tunnel of love to arrest Batman, Batman gives one final glare to his deceased archenemy and spits on him. The Joker's corpse later catches fire when one of Yindel's officers touches it, and remains burning as Batman makes his way off the ride to escape with Robin.

After hearing wind of Batman's return, Joker was shocked out of his catatonic state and quickly reverted back to his sociopathic, manipulative, villainous, and sadistic personality. His genius personality resurfaced as well, being able to pretend he felt remorse for his actions and that he was a victim of Batman's own psychotic obsession, to this Joker replies "I thought I was Batman's psychotic obsession." Another thing that returned was a love for theatrics, murdering his psychiatrist and the entire audience in front of Gotham city during a televised talk show.

Joker went to incredible lengths to cause Batman pain and ruin his reputation this was including the lives of others and his own. To cause him pain he kidnapped, beat and presumably raped Selina Kyle. Near his final moments he displayed his usual lack of remorse, showing no mercy to any of his victims claiming "I never kept count" (of the people he killed) instead was arrogant and mocking, claiming he had won, as two civilians thought they saw Batman snap his neck when he just paralyzed him.

He later committed suicide as to destroy Batman's reputation, finally defeating his archenemy in death, although he was slightly disappointed that Batman didn't murder him outright when telling him to finish him. 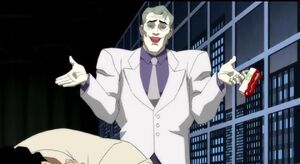 The Joker kills his psychiatrist. 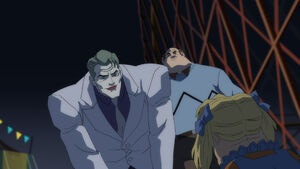 The Joker at the amusement park with his henchmen. 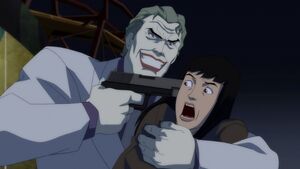 The Joker holding a woman hostage at gunpoint at the amusement park. 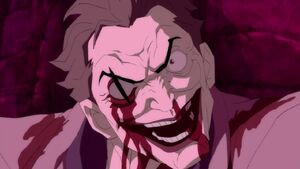 The Joker seconds before committing suicide via snapping his neck. 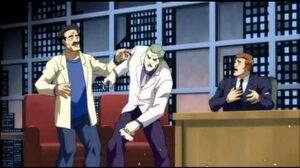 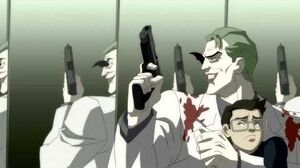 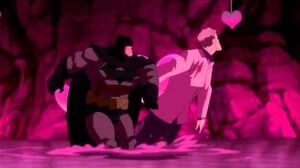 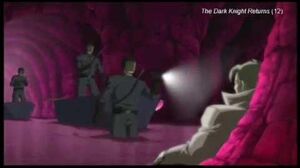