Make Batman admit that he is his greatest enemy and team up with other villains to take over the world (all failed).
Help Batman save Gotham (succeeded).

The Joker is the main antagonist of the 2017 Warner Animation Group film The LEGO Batman Movie.

He was voiced by Zach Galifianakis, who also played Humpty Alexander Dumpty in Puss in Boots and by Takehito Koyasu in the Japanese dub. Who also played Dio Brando, Roswaal Mathers and Nobuyuki Sugou.

In the opening of the film, the Joker and his men hijack a plane that contains several tons of explosives, planning on using them to destroy Gotham City. When the pilot of the plane doesn't believe that Joker's plan will work, based on the fact that's he's tried to destroy Gotham dozens of times and has always been defeated by Batman, Joker informs him that his plan will work this time as he's had his minions take over the Gotham Nuclear Plant, plant a bomb powerful enough to destroy the city on to it and had Egghead pelt the Bat-signal with eggs to prevent Batman from arriving.

With Joker and his minions threatening to destroy Gotham and Batman not being able to help, Commissioner Gordon and the GCPD are forced to surrender the Mayor of Gotham to Joker and his henchmen, however, unknown to them, the Mayor was actually Batman in disguise. As Batman begins to effortlessly pummel his minions, Joker begins to become frustrated as they're making him look bad in front of him.

As Joker's bomb begins to reach the end of it's countdown, his minions abandon the plant and Joker uses his balloons to try and evade Batman, however, he grabs Joker with his grappling hook and uses another hook to hold them in place. When Joker refers to himself as his greatest enemy, Batman shuts Joker down and tells him that he means absolutely nothing to him and that Superman is a much better arch-nemesis, despite him not even being a villain. Batman eventually lets the heartbroken Joker go in order to defuse the bomb.

While in his lair, a frustrated Joker laments to Harley Quinn about how Batman doesn't respect him as a villain and how incompetent his minions are, all while watching an interview between Superman and Lois Lane. When Superman talks about how he was forced to imprison General Zod inside the Phantom Zone, he also mentions how the Zone has some of the evilest villains of all time housed inside it.

During Commissioner Gordon's retirement party, Joker and his minions arrive and Joker orders Mr. Freeze and Clayface to bring him the new commissioner, Barbara Gordon, all while Harley Quinn changes into her civilian identity of Harleen Quinzel. However, Barbara fights off Joker's minions and confronts him at the same time as Batman and Joker reveals that he actually wants to be arrested and go to jail for his crimes, to the surprise of everyone, including his minions. While Batman is in complete denial of Joker's willingness to be imprisoned, he insists he is serious and traps all of his minions inside a giant present box.

With Joker and all of the other villains in jail, Batman sinks into a depression and spies on him and the other inmates, believing them to be up to something. At this point, Joker has Harleen drive up to Arkham Asylum with a van for "Phantom Zone Laundry" and Batman is inspired to put Joker in the Phantom Zone to keep him from committing crimes for good.

After stealing the Phantom Zone projector from the Fortress of Solitude, Batman and his adopted son Dick Grayson try to sneak it into Arkham, but are caught and are forced to fight through Arkham's security in order to get to Joker's cell. Batman confronts Joker and sends him to the Phantom Zone, but is arrested and locked in a cell shortly afterward.

Joker then happily descends into the Phantom Zone and, after being scanned for how evil he is by the Zone's gatekeeper Phyllis, Joker meets the other prisoners of the Phantom Zone: Voldemort, Sauron, King Kong, The Wicked Witch of the West and her Flying Monkeys, the Daleks, the Velociraptors and Tyrannosaurus Rex from Jurassic Park, Agent Smith, Kraken, Gill-man, Dracula, Medusa, Jaws, the Skeletons from Jason and the Argonauts, and the Gremlins. Upon his arrival, the villains try to kill Joker, but he tells them all that he can get them out of the Phantom Zone and they agree to work for him in exchange. At that moment, Harley Quinn steals the Phantom Zone projector and sets it to release all of the villains entrapped in the zone. Upon doing this, Joker, as a giant face over the city, tells Gotham that he is going to take over the city with the help of real villains before unleashing them on the city.

Joker then has Sauron tell him the location of the Batcave and, after failing to realize that Bruce Wayne and Batman are the same person, he trashes the cave and converts Wayne Island into an amusement park. After Batman, Dick, Barbara Gordon and Alfred evade his attacks, destroy Sauron and crash land on Joker Island, Batman has the Scutler take his friends away from the island so he can stop Joker without endangering them. After being caught by Joker and his minions, Joker tries to get him to admit that he is his most hated enemy, but Batman refuses (When Joker says "I hate you", Batman heartlessly responds "Me too"). Finally exasperated, Joker tells Batman that his only real greatest enemy is himself and banished Batman to the Phantom Zone. Joker and his minions then leave the Island and prepare to use Joker's bomb to destroy the city.

Upon being released with the promise that he will return all the escaped criminals, Batman teams up with Dick, Barbara, and Alfred, along with all the villains who escaped from Arkham to take down Joker and his minions. After the Phantom Zone villains are re-imprisoned and the city is blown up by the bomb, Batman convinces Joker to help him save the city by admitting that he truly is his greatest enemy. Upon saving the city, Joker and Batman's villains walk away as Batman gives them a 30-minute head start.

This incarnation of Joker is extremely boastful, destructive, violent, traitorous, manipulative, sometimes sarcastic, and arrogant. He despises his acolytes for their incompetence against Batman. He also showed that he was very wounded by Batman when he told him that in his eyes he was nothing. But near the end of the movie, Batman says that he's the reason he still fights crime in the city.

Unlike most versions, this Joker takes his desire to make Batman hate him to new levels. Unlike most of his other incarnations whom care as much about causing chaos, this Joker focuses on making Batman consider him a true foe to the point where he becomes angry when Bruce refuses. This trait, however, does make him somewhat sympathetic given how Batman disregards him and how it genuinely hurts Joker.

When Batman admitted to Jokers he is Batman’s greatest enemy, Joker teamed up with Batman and helped him save Gotham City. He was even happy when Batman didn’t have to stay in the Phantom Zone and was on much more friendly terms with Batman afterwards forming a love/hate relaonship with him. Joker wasn’t abusive to Harley Quinn and treated her like an actual girlfriend as well. 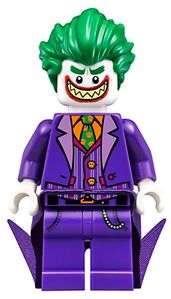 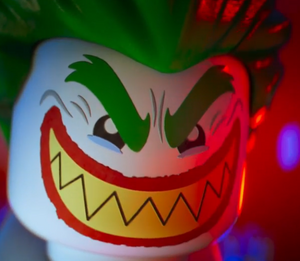 Joker heartbroken after Batman tells him he is nothing.

Joker after temporarily teaming up with Batman.

The Joker surprised to see Batman making him an offer of redemption. 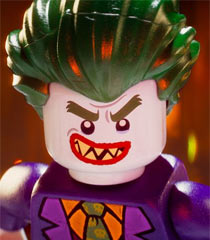 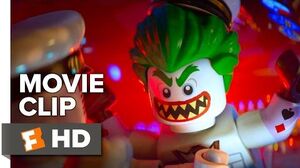