Joker (Under the Red Hood)

The Joker
Clown Prince of Crime

Kill Batman and Robin or turn them into monsters like him (mostly failed).

The Joker is the main antagonist of the 2010 animated film Batman: Under the Red Hood and its 2020 animated interactive sequel Batman: Death in the Family.

He is a psychotic master criminal, Batman's archnemesis and the murderer and later attempted victim of Jason Todd), the second Robin. He also works as a henchman to Ra's al Ghul and Black Mask, though only as long it suits him.

He was voiced by John DiMaggio, who also played Bender Bending Rodríguez in Futurama, Jekhide in Mia and the Migoo, Nitro Zeus in Transformers: Age of Extinction, Dr. Drakken in Kim Possible, Hannibal McFist in Randy Cunningham: 9th Grade Ninja, Brother Blood in Teen Titans, Arthur in Wreck-it-Ralph, Hans the Puffin in The Penguins of Madagascar, BlackJack SquarePants in SpongeBob SquarePants, Jesse and Woolter in Zootopia, Lobo in Justice League: Action, General Grievous in Star Wars: Clone Wars and Toyman in Superman: Doomsday.

The Joker was the one who used the moniker of the Red Hood before Jason Todd. At a botch robbery at Ace Chemicals, he was confronted by Batman. The frightened man tried to plead with Batman, who pulled out some cuffs. The man said he was setup and he wasn't a criminal. He tried to take off his hood, but he stumbled on his cape and fell into a vat of chemicals. The chemicals dyed his hair green, turned his lips red and bleached his skin, along with destroying his sanity. His fate as the Joker was sealed.

The Joker is hired by Ra's al Ghul to distract Batman and Jason Todd, the second Robin, from the terrorist's plan to destroy the world economy. The Joker lures the Dynamic Duo to Sarajevo, Bosnia, where he beats Jason with a crowbar and leaves him to be killed by a bomb, although not before sadistically requesting that Jason "tell the big man [Joker] said 'hello'". Feeling guilty for his death, Ra's al Ghul revives Jason with the Lazarus Pit. Five years later, Jason returns to Gotham as a crime lord calling himself the Red Hood, purposely taking his murderer's former criminal identity to attract his attention. In addition, by that point, the Joker was placed in Arkham Asylum under extensive security measures to ensure he could not escape.

After his first encounter with the Red Hood, Batman goes to Joker for information in Arkham Asylum. He claims that there is no connection, although he nonetheless proceeds to cruelly reference his role in Jason Todd's death to Batman, and also implied a desire for Batman to kill him in rage. When Red Hood tries to kill him, Black Mask reluctantly hires the Joker as a hitman to take down the Red Hood. Upon being freed, Joker, under the premise of wanting water, used a glass to slice one of Black Mask's men's throat and gunned down the crime lord's remaining bodyguards in quick succession with a stolen handgun, before requesting his standard outfit, a big truck, as well as some henchmen. He then starts laughing at the thought of killing Black Mask's minions much to the latter's discomfort.

The Joker kidnaps Jason's eight under-bosses, and then proceeds to betray the Black Mask by placing him among the under-bosses (as they formerly worked for Black Mask), and holds them hostage inside the truck, also crashing the truck on the bridge and causing a spectacle causing the GCPD to arrive and news reporters to swarm in on the breaking report, also dousing the underbosses and Black Mask with gasoline with the intention of torching them. However, his lighter ended up acting temperamental as Jason arrives and reveals that his previous actions were designed to lure the Joker away from the safety of Arkham so that he could kill him, also making clear they had met before. He ultimately manages to light it before dropping it into the truck, with only the timely arrival of Batman foiling the torching attempt. However, Joker was freed from the Batplane's restraints by Jason, who proceeded to abduct him in turn. At a secluded apartment in Crime Alley, Joker was beaten by Jason, who cryptically alludes to Joker's earlier torture of him being responsible for his existence when Joker inquired about how they knew each other. He forces Batman to either kill him, kill the Joker directly, or otherwise let Jason kill the Joker. Batman refused the offer, and threw a batarang into Jason's gun barrel, detonating it, with Joker taking amusement in how, despite Batman finding a way to win, "everybody still loses." After Jason activated a bomb set to a 20 second timer that would kill all three, Joker prevents Batman from disarming the bomb, maniacally declaring that he'll be "the only one who gets what he wants tonight!" while pinning Batman down. However, he is knocked unconscious by Batman, and managed to save himself, Jason and the Joker. While Jason escapes, Batman takes the Joker back to Arkham. 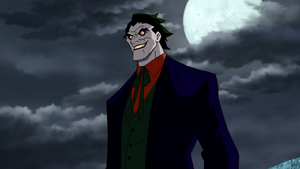 Joker while being hired by Ra's al Ghul. 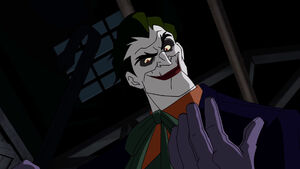 Joker mocks Jason Todd, prior to killing him. 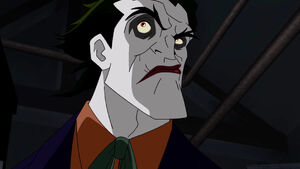 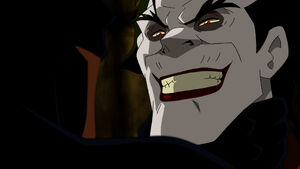 "You gonna do it this time? Or are you just going to put me in another bodycast for six months?". 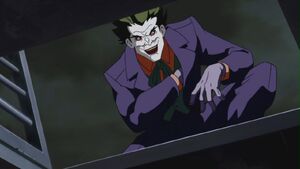 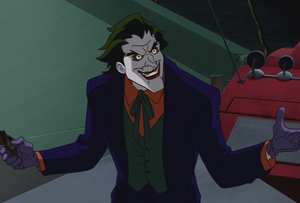 Joker during his standoff with the Red Hood 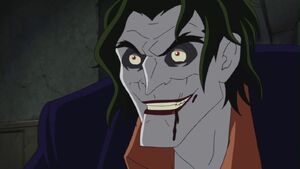 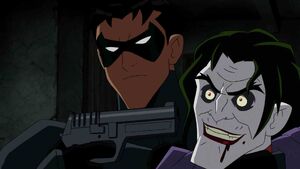