Further the goals of the Injustice League.

Sadistic Serial Killer
The Joker is a recurring villain on Young Justice. He is Batman's archenemy and a member of the Injustice League.

He was voiced by Brent Spiner, who also played Lore in Star Trek: The Next Generation.

The Joker is a dangerous and psychopathic criminal. Although he looks like a clown, he is never to be underestimated. He is cruel, sinister, manipulative and above all completely insane, the Joker has proven multiple times to be the Batman's greatest foe.

He also claims to have multiple personalities and has a tendency to break the fourth wall.

The Joker is a tall, slender man, with chalk white skin, ruby red lips and a head of bright green hair falling down in a mop style. His most distinguishing feature, however, is his massive and wide smile that is constantly on his face, giving him a sinister sort of appearance at all times.

He is most commonly seen wearing a purple suit with a flower on his lapel, skinny leg pants, a skinny purple tie and a silver chain at his waist.

The Joker was a member of the Injustice League when they decided to come out of the shadows. He used a device that allowed him to manipulate Poison Ivy's plants to attack various cities around the globe. After the Injustice League headquarters were discovered by Robin and his team Joker left his position and tried to defeat the intruders and Robin especially. After the Justice League arrived, Joker surrendered before being forcefully apprehended. 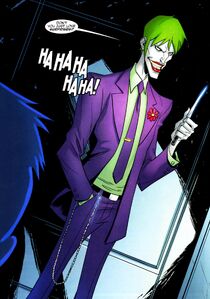 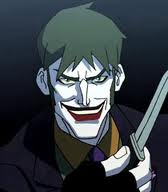 Add a photo to this gallery
Retrieved from "https://villains.fandom.com/wiki/Joker_(Young_Justice)?oldid=3766863"
Community content is available under CC-BY-SA unless otherwise noted.