Mob Don for the Gambetti Crime Family (until his death)

Have Niko protect Bobby Ferguson from being assassinated.

Have Niko kill Kim Young-Guk.
Have Niko destroy all of the Russian's coke. (all succeeded).

He was voiced by Madison Arnold.

Jon Gravelli was born in 1923 and joined the mafia at the age of 12 in 1935, already aware of their rivalry with fellow mob family The Ancelottis. He was first arrested at the age of 17 for possession of gambling records. He continually was arrested throughout his life for a multitude of crimes, but was never sent to prison.

Jon's son was born in 1968 and works for The Gambetti family until he had taken up a heroin addiction, making the rest of the family disown him.

Jon became Don of the Gambetti family in 1978 after the death of former Don Sonny Cangelosi and under his leadership, The Gambetti's became the most powerful mob in Liberty City history.

During the 1990's and early 2000's after charges of murder and obstruction of justice were dropped, Jon became close friends with the United Liberty Paper contact and started working alongside him.

In 2005, Jon was admitted to the Schottler Medical Center for an unknown disease, possibly lung cancer due to constant coughing and use of an oxygen tank during cut-scenes, while awaiting trial for racketeering.

Niko Bellic first meets Jon Gravelli during the mission "Entourage" after the ULP contact recommended Niko as a "mutual friend". Jon tells Niko to protect a politician named Bobby Ferguson that's being targeted by Dimitri Rascalov's Russian gang. Niko is ambushed by the Russians, but manages to save Bobby.

During Niko's next visit to Jon, he tells Niko to kill a man named Kim Young-Guk, whom Niko had previously helped bring to LC for Derrick McReary, for selling faking American currency and devaluing it. Niko goes to Mr. Fuk's Rice Box and kills Kim as he's leaving the kitchen.

In Jon's final mission for Niko, Jon tells Niko to destroy several vans of cocaine that belong to the Russians and the Ancelottis. Niko blows up all of the vans, and in return, the ULP contact finds and brings Darko Brevic to LC for Niko.

After Niko completes the main story-line, he will soon either hear on the radio or read on the Weazel News website that Jon had died in his sleep of natural causes at the age of 85. 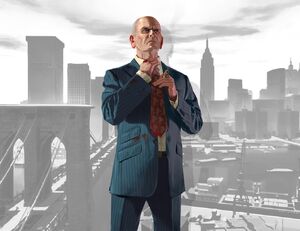 Jon Gravelli before the events of GTA IV.