Leader of a time pirate group

Escape captivity and capture the Waverider.

Jon Valor is the leader of a time pirate group and an antagonist in the TV series DC's Legends of Tomorrow.

Valor is the leader of a group of time pirates. At some point, he and his crew are caught and apprehended. However, while being transported on the Acheron to be brought before the Time Masters they manage to break free and capture the vessel, imprisoning its captain Eve Baxter. They then send a distress signal to lure in a Timemaster, intending to steal his or her vessel. The signal is picked up by Rip and his team and they decide to investigate. However, while exploring the ship Rip, Mick and Jackson are swiftly captured by the time pirates and brought before Valor.

He contacts the Waverider and tells Palmer, who has been named captain in Rip's absence, that he has captured Rip and his men. He orders Palmer to surrender the spaceship and further states that after the Waverider is surrendered he would drop them off to a point in time of their chosing. However, he also claims that he will shoot Rip in the head should Palmer not give up. While Ray is uncertain what to do, Rip speaks to Valor and tells him about a maneuver Palmer is supposed to have done.

However, the conversation is still broadcasted to the Waverider and the phrase activates certain protocolls that force Gideon to dock off and attack the Acheron. The Waverider breaks free which results in a space battle between both ships. As Valor wants the Waverider, he orders his men to only attack the ship's life supports systems. However, unbeknownst to Valor Martin Stein has also snuck onboard the Acheron. Stein deactivates the ship's weapon systems while Leonard Snart uses his freeze-gun to freeze a hole Valor's men blasted into the Waverider.

Once again, Valor tells Rip to order his crew to surrender. However, Rip instead uses another phrase which causes Gideon to activate the Waverider's invisibility systems. Having lost track of the Waverider, Valor orders his men to imprison Rip and the other captives in the brig while continuing his search for the Waverider.

Eventually Mick Rory, fed up with Rip and his ideas of glory, contacts Valor and offers him the Waverider if Valor brings him back to the moment Rip recruited him for the team, intending to deny the offer this time. Valor agrees to the deal but beats up Rory to make it seem like Rory managed to escape him.

Rory then returns to the Waverider, acting like he escaped the pirates. However the truth is soon revealed when he shows that he has joined the pirates. While Valor's men led by Mick hunt the escaping member of Rip's crew, Valor remains on the Acheron where he is confronted by Rip who escaped captivity. Valor attempts to shoot Rip but Rip attacks him. In the erupting fight Valor gets the upper hand and attempts to strangle Rip. However, Rip breaks free and knocks down Valor. He then uses the ship's controls to eject the time pirates into space and hands Valor over to Baxter. 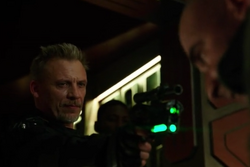 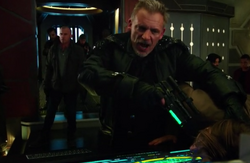 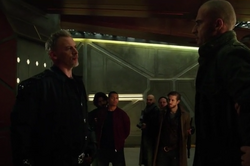