Evil Swordsman
Jonathan Christopher Morgenstern, also better known as Sebastian, was the son of Valentine Morgenstern and Jocelyn Fairchild/Fray and the older brother of Clary Fray. He posed as Sebastian Verlac during the events of City of Glass in which he is the secondary antagonist. He was the main antagonist for the second half of The Mortal Instruments series.

Before he was born his father Valentine fed Jocelyn demon blood from Lilith, a Greater Demon. This caused Jonathan to be born with dark eyes and have no good in him. Sometime later Valentine faked his and Jonathan's deaths and went into hiding and started training his son to become the ideal spy while also raising Jace Herondale.

Years later Jonathan went to Idris under the name of Sebastian Verlac (the real one he killed) in order to put down the wards to let demons in. He succeeded this and ended up killing Jace's adoptive brother Max as he saw him do it. He is later killed by Jace.

However Lilith found his body and was determined to revive him and forced Simon Lewis a Daylighter Vampire to bite him and give him blood but this process was only half complete as Simon was able to get rid of Lilith by using the Mark of Cane. But later Jace was tricked into applying a rune which bounds him to Sebastian. But Clary was able to server the bound by stabbing Jace with a sword called Glorious.

Jonathan now deciding to keep the name Sebastian then later used the Infernal Cup to create Endarkend Shadowhunters to fight normal ones and Downworlders. He also wished to rule Hell with Clary by his side.

In the final book City of Heavenly Fire he is fatally wounded by Clary who stabs him with one of the Morgenstern family swords Heosphoros (which was filled with heavenly fire) which destroys the demon blood in Sebastian's body and becomes good and asks to be called Jonathan. But there is not enough good in him for him to survive and dies in his mother's arms after apologising for his actions as Sebastian and is later cremated.

Jonathan/Sebastian had blond hair (like his father Valentine) which he briefly dyed black whilst undercover and had black eyes (due to the demon blood). But after becoming good, his eyes turn green (which would have been his natural color if he hadn't had demon blood in him). 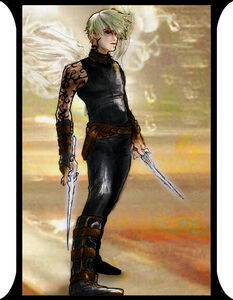 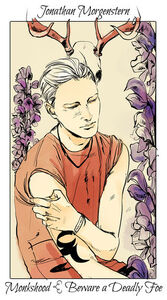 Retrieved from "https://villains.fandom.com/wiki/Jonathan_Christopher_Morgenstern?oldid=3822205"
Community content is available under CC-BY-SA unless otherwise noted.