A Kiss Before Dying

Killing people for his personal gain.

Become romantically involved with Ellen Carlsson in order to gain access to her family's wealth.

Jonathan Corliss is the main antagonist in the 1991 film A Kiss Before Dying. He is a psychopathic killer who murders his way into a wealthy family.

He was portrayed by Matt Dillon, who also portrayed Patrick Healy in There's Something About Mary, Sam Lombardo in Wild Things, Trip Murphy in Herbie: Fully Loaded, and Jack in The House That Jack Built.

Jonathan grows up in a poor family, and is raised mostly by his mother after his father walks out on the family. He becomes obsessed with the wealthy Carlsson family, and decides to join their ranks. In college, he has a relationship with one of the two Carlsson daughters, Dorothy, and apparently makes plans to marry her. When he gets Dorothy pregnant, however, he fears that her conservative father will disinherit her, and so decides to kill her. He tricks her into writing a poem that sounds like a suicide note, and then pushes her off a ledge to her death, then making it look as though she committed suicide.

After killing Dorothy, he fakes his own suicide and steals the identity of Jay Faraday, a man who picks up hitch-hiking and whom he subsequently murders. Jonathan then begins dating Dorothy's sister, Ellen, and eventually marries her. He endears himself to Ellen's father, who gives him a well-paid job in his company. Ellen is obsessed with finding her sister's killer, however, and Jonathan kills several other people who can tie him to the crime.

Towards the end of the film, Ellen finally discovers the truth about Jonathan after visiting his old house and gathering clues regarding his true identity. Jonathan appears in the doorway and prepares to strangle her with a belt, but Ellen manages to stab him in the arm before escaping. Jonathan pursues her onto the nearby train tracks, but is run over by a freight train - ironically, the very Carlsson Copper train that he spent his entire childhood watching out his window. 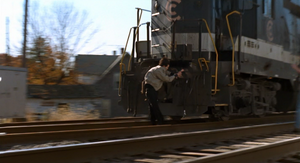 Jonathan being hit by a freight train while pursuing Ellen Carlsson 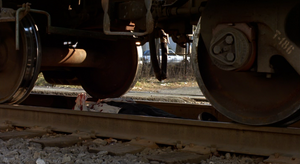 Jonathan's dead body lying beneath the train
Add a photo to this gallery
Retrieved from "https://villains.fandom.com/wiki/Jonathan_Corliss?oldid=3774593"
Community content is available under CC-BY-SA unless otherwise noted.