Villains Wiki
Register
Don't have an account?
Sign In
Advertisement
in: Doctors and Scientists, Destroyer of Innocence, Imprisoned,
and 40 more

Disguising himself as multiple characters from both genders

Plotting revenge on both Mystery Inc. and the city of Coolsville.

Get revenge and kill Mystery Inc for arresting him once and for all (all failed).

Dr. Jonathan Jacobo, otherwise known as Heather Jasper Howe or The Evil Masked Figure, is the main antagonist of the 2004 film Scooby-Doo 2: Monsters Unleashed. He is a mad scientist who wants revenge on the Mystery Incorporated for capturing and imprisoning him in the past.

Jonathan Jacobo is a typical mad scientist, who wants to create real monsters and enjoy the rampages they caused. After being caught by the Mystery Incorporated, Jacobo held a lifelong grudge and vowed to have his revenge on them at all cost.

As Heather Jasper Howe, she seems to be a benevolent, polite reporter at the first glance, but as the story progesses, she reveals her true nature as a fraudulent, untrustworthy person. It is later revealed that she is just a facade of Jacobo. In addation, the last scene also shows that Jacobo can be angered for simply petty reasons.

Jonathan Jacobo is a scientist who desired to create monsters. To fund his experiments, he became the Pterodactyl Ghost, wreaking havoc and stealing millions of dollars in a state-wide crime spree. Eventually he was caught by Mystery Inc., unmasked and sent to prison. Jacobo eventually attempted to escape on a hay glider. However, an malfunction occured in the process and he fell into the ocean; his body was never found and he was presumed dead.

In truth, Jacobo had survived, and dressed up like a female reporter named Heather Jasper Howe and an Evil Masked Figure and turned his old Pterodactyl Ghost costume into a real monster with a machine he built, along with costumes of some other past Scooby-Doo monsters to get revenge on Scooby and his friends by destroying them, their reputation and their hometown Coolsville. As Heather, he spreaded information against the Mystery Gang for their failures.

Jacobo later reappeared as the Evil Masked Figure in the climax, controlled all the monsters to fight and kill the Gang. Luckily after a big battle with the Tar Monster, Scooby managed to turn all of the monsters that Jacobo created back into costumes.

After his defeat, the Evil Masked Figure is caught and unmasked in front of the public as Heather Jasper Howe. However, the Mystery Gang suspected something and unmasked her for the second time, revealed that Heather is Jacobo in disguise. Jacobo and the camera man Ned who aids Heather were then sent to prison. 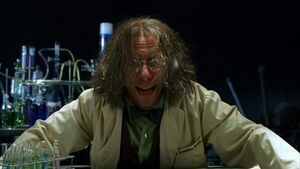 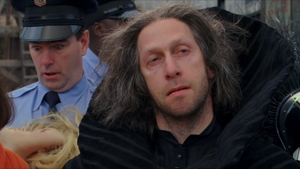