Jones, also known as The Crocodile, is a minor character in the top-down shooter video game Hotline Miami. He is a 50 Blessings operative who wears a crocodile mask. He is unsuccessful in carrying out a massacre ordered by 50 Blessings.

Jones is a bald African-American man assumed to be in his forties. He has hazel eyes, a black mustache, a bloody gash tearing up his left-hand brow and a bleeding nose. He wears a bloodied green jacket, green pants, a pair of dark red shoes and a crocodile mask he appears to have worn during his work for 50 Blessings.

Nothing is known about Jones' past. When 50 Blessings takes a stand against "Russian oppression" in America by using cryptic and threatening phone calls to coerce people into killing members of the Russian Mafia, Jones is one of the many people in Miami who start receiving these phone calls. Implied to be experienced enough in combat for 50 Blessings to target him, Jones complies with the messages left on his answering machine and tries to massacre a group of Russian mobsters occupying SW 104th Street. However, Jones botches the hit and gets severely injured in the process, finding himself bleeding to death in Miami's sewers.

Later on May 11th, 1989, Jacket is sent to the same house Jones tried to attack, being explicitly ordered to not "bother any of the neighbors". Jacket is successful in wiping out the gangsters occupying the house. Finding a crowbar, Jacket prys open a manhole leading into the sewer and finds Jones sitting in a gory pool of his own blood, rapidly bleeding out. Jones mysteriously asks Jacket if everything that has happened is just a bad dream. Believing that what he is experiencing is a dream, Jones slumps over dead from blood loss, so Jacket takes Jones' crocodile mask and flees the scene. Fitting to the circumstances behind his death, Jones' crocodile mask grants Jacket the "More Gore" ability when worn, making his kills bloodier and gorier.

Jones questioning if everything happening is a dream is implied to foreshadow the fact that Jacket is reliving his past memories in a dream during his coma for much of the game until he finally wakes up. However, considering Jacket owns Jones' mask after he wakes up from his coma, it is assumed that Jones was a real 50 Blessings operative who failed his task, was killed in the process and later found by Jacket. 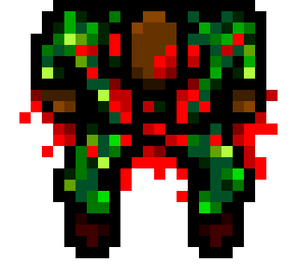 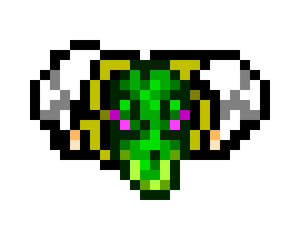 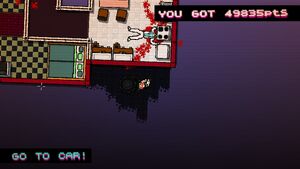 Jacket prying open a manhole leading to Jones in the sewers. 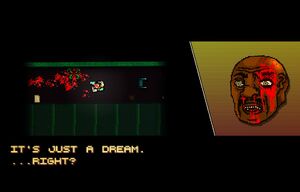 Jones asking Jacket if everything happening is just a dream before dying of blood loss.